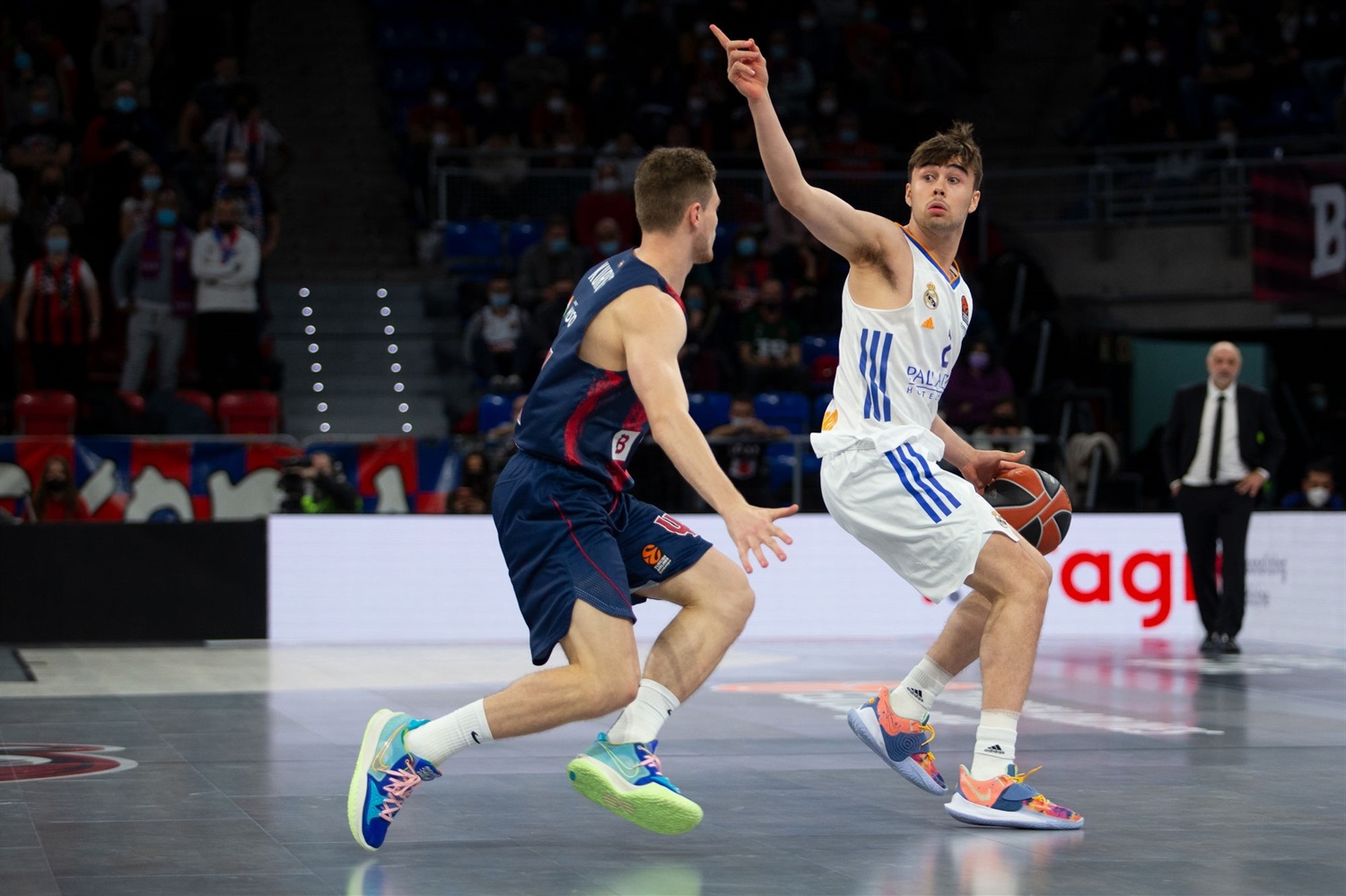 Round 12 of the Turkish Airlines EuroLeague Regular Season began with five Thursday games, including two between domestic rivals. Those two games were the only Thursday games with road winners. Anadolu Efes rode Shane Larkin’s hot hand to rally past Fenerbahce Beko in the Istanbul derby, and Real Madrid trounced Spanish league foe Baskonia in Vitoria-Gasteiz. CSKA Moscow held off Bayern in the Round 12 opener, ALBA Berlin stopped Maccabi and Panathinaikos snapped its losing streak by beating Zenit. Friday brings another clash of local rivals when Monaco hosts ASVEL.

CSKA Moscow edged FC Bayern Munich 77-74 in the Russian capital on Thursday to improve to 7-5 on the season. Will Clyburn led the winners with 17 points, Alexey Shved, Toko Shengelia and Johannes Voigtmann each scored 12 and Daniel Hackett had 10 for CSKA. Darrun Hilliard paced Bayern with 28 points, and DeShaun Thomas added 17 for the guests. The loss dropped Bayern’s record to 5-7. Clyburn struck twice from downtown in the final 2 minutes and added a layup and a dunk to lead CSKA to a hard-fought victory.

Shane Larkin had his best game of the season in leading Anadolu Efes Istanbul to a come-from-behind 84-89 victory over crosstown rival Fenerbahce Beko Istanbul on Thursday in the season’s first Istanbul derby. Larkin scored a season-high 25 points and matched his season-best with seven assists to lead Efes, which won its fourth straight game to improve to 6-6. Fenerbahce lost its fourth in a row to slip to 3-9. Efes scored the last 8 points of the game to complete a comeback after trailing by 12 earlier in the fourth quarter. Tibor Pleiss added 17 points, and Vasilije Micic scored 14, but he also committed six turnovers. Marial Shayok led Fenerbahce with a career-high 18 points in 4-of-4 three-point shooting. Nando De Colo tallied 14 points and five assists. Jan Vesely netted 13 in 24 minutes before fouling out, and Pierria Henry scored 14, dished four assists, and swiped four steals.

ALBA Berlin gained its first home victory this century over Maccabi Playtika Tel Aviv with a 91-86 triumph on Thursday night. The early stages saw several lead changes before ALBA finished the first half strong, taking a 45-35 interval lead. The margin stayed roughly the same until Maccabi mounted a strong charge in the final period, getting within 2 points, but ALBA pulled clear again to improve to 4-8 while Maccabi dropped to 7-5. Marcus Eriksson led the winners with 19 points on 5-of-8 three-point shooting. Christ Koumadje provided 12 points and five rebounds, and Maodo Lo had 11 points, five rebounds, and three assists. Maccabi’s Scottie Wilbekin topped all scorers with 22 points, Ante Zizic scored 17, Derrick Williams had 15, and James Nunnally added 10.

Real Madrid grabbed its fifth consecutive win by downing Bitci Baskonia Vitoria-Gasteiz 60-88 at Buesa Arena on Thursday. Real improved to 10-2 in the Turkish Airlines EuroLeague standings while Baskonia dropped to 4-8 and is 1-6 in its last seven games. Fabien Causeur led the winners with 13 points, Walter Tavares and Thomas Heurtel each had 12, and Alberto Abalde grabbed 11 rebounds for Real. Steven Enoch and Simone Fontecchio paced Baskonia with 14 points apiece. Causeur scored 6 points in a 0-10 run that allowed Real to get a double-digit lead, 14-25, after 10 minutes. Heurtel struck twice from downtown, and Rudy Fernandez hit three more from beyond the arc to boost Los Blancos’ margin to 34-52 at the break. Little changed after that, as Real increased its margin to 47-71 after 30 minutes and then again to 49-75 soon after that, cruising to a no-doubt-about-it road win.

Panathinaikos OPAP Athens snapped its five-game losing streak with a 70-64 victory at home, coming back from a big early deficit thanks to an outstanding performance from Georgios Papagiannis. Zenit was riding a five-game winning streak and scored the first 12 points of the game. Panathinaikos put together an 18-2 run in the third quarter and extended the gap to 10 points in the fourth. Zenit pulled back ahead, but Nemanja Nedovic hit a crucial three-pointer in the closing stages to give Panathinaikos the win and a 3-9 record. Nedovic finished with 18 points, and Papagiannis totaled 18 points, 13 rebounds, and four blocks while Daryl Macon Jr. chipped in 11 points. Jordan Loyd paced Zenit with 15 points, Conner Frankamp scored 14 points, and Mindaugas Kuzminskas tallied 13 points and eight rebounds in the loss.

PrevPreviousMarc Gasol to play for Spanish club Girona, which he founded in 2014
NextArchrivals Real Madrid and Barcelona share first place in Euroleague standingsNext