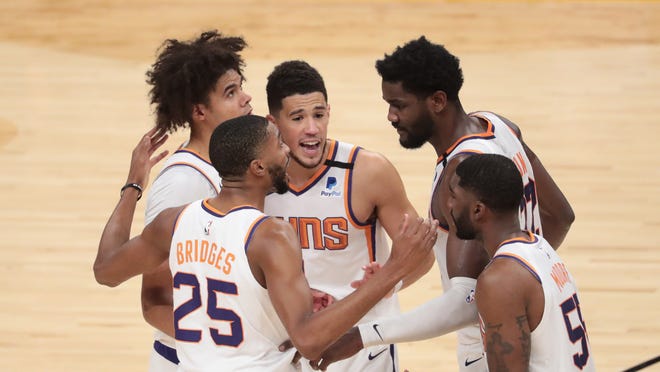 The Phoenix Suns haven’t enjoyed a ton of success over the past several seasons. In fact, the Suns haven’t been to the playoffs since the 2009-10 campaign.

That season, the Phoenix Suns won 54 games and they’ve won more than 40 games just one other time over the past decade. That occurrence took place in 2013-14 when the Suns posted a 48-34 record. However, things have been a bit different for this squad dating back to the conclusion of last season.

The Phoenix Suns posted a perfect 8-0 mark and finished with a 34-39 mark. Again, that effort wasn’t good enough for a postseason berth. But it was an impressive stretch of play by this squad, nonetheless.

The Suns started this season with a mediocre 8-8 record. Given that fact, it would have been reasonable to presume that the team was heading for another ho-hum season. Since that 8-8 start, though, the Suns have put together another impressive run.

For example, the Phoenix Suns have won six consecutive games overall, following their victory against the Orlando Magic on Sunday night. On top of that, the Suns have posted victories in nine of their last 10 outings, improving their overall record to 17-9. This mark is good enough for the fourth-best record in a rugged Western Conference.

It is also worth mentioning that Devin Booker has been playing some outstanding basketball as well. The Suns’ guard has put up at least 30 points in three of the team’s last four outings. Additionally, Booker is shooting a career-high 49.4 percent from the field and he is knocking down 36.4 of his attempts from 3-point range. And in eight February outings, Booker is averaging 27.4 points per contest on 52.6 percent shooting and 40.9 percent from beyond the arc.

But the story doesn’t end there. While the Phoenix Suns aren’t an elite scoring team (ranked 21st—110.8 points per contest), they are getting it done from a defensive standpoint. They have the fourth-best scoring defense, giving up 107.8 points per contest. Furthermore, the Suns have the sixth-best defensive rating, allowing 109.2 points per 100 possessions. Yes, we are only a third of the way through the NBA season. Yes, a lot of things could happen that could derail the Sun’s hot start.

On the flip side of the coin, isn’t it conceivable that the Phoenix Suns could sustain their level of play? And isn’t it also possible that the Suns could be a formidable opponent in the playoffs?

Sure, this is kind of talk could be premature at this point. However, the Phoenix Suns aren’t an opponent that anyone should sleep on. That being said, this group could go on to produce the team’s first postseason appearance in over a decade.