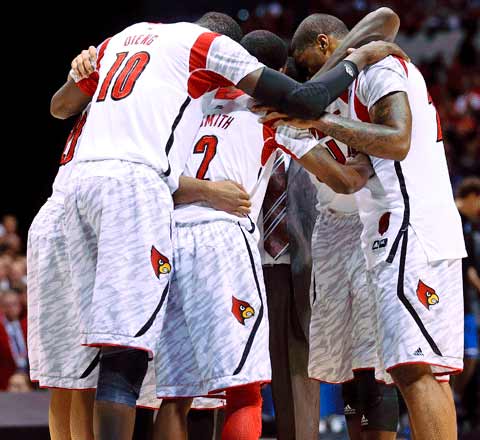 Day two of the NCAA Regional Finals ended with Michigan and Louisville joining Wichita State and Syracuse in next week’s Final Four, but the big story of the day was the horrific injury suffered by Louisville sophomore Kevin Ware. With just over six minutes to play in the first half, Ware ran out and jumped to get a hand in front of a triple attempt by Duke’s Tyler Thornton, as Ware came down he landed awkwardly and went down hard. His teammates collapsed on the floor, his opponents covered their faces, the bench reacted, the trainers dashed to his side and covered up his right leg that was very visibly broken. For nine minutes play was stopped as Ware was attended to. Cameras cut to teammates and coaches wiping tears from their eyes, and as Ware was rolled out of Lucas Oil Stadium, the crowd that was heavy in Louisville fans since their campus is only 100 miles away, gave the young Cardinal a standing ovation offering their support as he started his journey, first to the hospital to get the medical attention he needed, then to work back to the court. Of course, the first thing Ware had to do was rally his mates. He asked to talk them and according to coach Rick Pitino, Ware told the guys, “Don’t worry about me. I’ll be OK. You guys go win this thing.” Pitino told the Cardinals that they needed to win the game to get Ware back home to Atlanta, where he played his high school ball. They succeeded in a big way.

On the court, Michigan dominated Florida from tip to final buzzer on their way to a 20-point pounding of the No. 3 ranked Gators, 79:59. In Indianapolis, Louisville and Duke played some of the best basketball of the tournament through the first half and into the second, before Louisville turned up their game a notch and rode the emotions of the situation with their fallen teammate. The Cardinals went on a 17:2 run and earned their spot in the Final Four with an 85:63 victory over the Blue Devils.

Michigan – Florida, 79:59
The Wolverines of Michigan haven’t been to the NCAA Final Four series since the ‘Fab Five’ came through Ann Arbor in the early 90s. This year’s squad is littered with young, energetic ballers, including a few with famous names on their backs. Three of the starters are freshman, one’s a sophomore and the old man on the court is Tim Hardaway, Jr., a junior and son of former NBA great, Tim Hardaway. Joining Hardaway on the hardwood is former NBA star Glen Robinson’s son, Glen Robinson III, also a freshman. By contrast, Florida sent three seniors and two juniors out to match up with the Wolverines.

Michigan made a solid statement early in the game, rolling off the first 13 points before Florida got their first points. The reality was, it seemed that while Michigan was in full steam, Florida hadn’t quite finished tying up their shoes. By the midway point of the first half, Michigan was up 25:8, which is where they finished the half, a 17-point lead, 47:30.

At the start of the second half, Florida made a run for it, knocking down the first six of the second 20, cutting the margin to 11, 47:36. Michigan’s Nik Stauskas killed the rally with a triple, then after a jumper from Gator Kenny Boynton the Wolverines dropped in six of their own to push the advantage back up to 18, 56:38. After that, Florida never got closer than 16 and the Wolverines booked their trip to Atlanta and the Final Four.

The key to the Wolverines offense game was the hot hand of freshman Stauskas, a deadly long-baller, who connected on 6 of 6 from behind the arc in the contest and led the club with 22 points. Trey Burke added 15 points, 8 rebounds, and 7 assists, and Mitch McGary contributed 11 points and 15 rebounds.

Florida got 13 from both Boynton and Will Yeguete.

Michigan will now face Syracuse in the National Semifinals on April 6th.

Lousiville – Duke, 85:63
The Midwest Regional played out as the schedulers hoped with No. 1 Louisville facing No. 2 Duke in the Regional Final. It was a game that had the makings of a world-class barnburner and was for the first half and five minutes into the second with multiple lead changes, until Louisville did what Louisville does, they buried their opponent with guards that are impossible to stop and some hot shooting.

In the first half neither team could get an advantage of more than four points as they exchanged baskets throughout. With just over seven minutes to play, Gorgui Dieng, an import from the African country of Senegal, dropped in a jumper to give Louisville a 17:21 lead. On the other end of the court, Thorton dropped in a three, but in the process Ware took a hard line to close out and get a hand up, and as he landed, he broke both bones in his lower left leg. During the nine minutes he was attended to he repeatedly told his teammates that he was OK and that they needed to win the game. Louisville coach Pitino stated at the post-game conference that if it weren’t for Ware’s insistence, many, including himself, would have probably not had the will to finish the contest after witnessing Ware’s injury. “I don’t think we could have gathered ourselves, I know I couldn’t have, if Kevin didn’t say over and over again, ‘Just go win the game,'” Pitino commented.

After Ware’s injury, the two clubs gathered their composure and got back on the court to finish the half, with Louisville taking a 35:32 lead into the intermission.

At halftime, Ware’s closest friend on the team, Chane Behanan, was able to get in touch with Ware and again, the fallen guard reminded his friend that he would be OK and that the Cardinals had work to do. Behanan noted the conversation in a post-game interview, “He said ‘Don’t worry about me, I’m good, I’ll have my surgery tonight. Go win it for me.'”

After the play resumed in the second half, Louisville’s Russ Smith was fouled on a three-pointer attempt and connected on all three singles, putting the Cardinals up 38:32. The hot team out of the lockerroom though was Duke, and guard Seth Curry, who was scoreless in the first half. Curry came out firing, scoring Duke’s first eight points on two triples and splitting two pair of free throws. Mason Plumlee sank a jumper to knot the score at 42 and it looked like the contest was going to go to the wire.

Maybe it was Pitino’s reminder that the team was playing for Ware and his wishes to win the game, maybe the emotions got to the club, maybe it’s just what Louisville does, but whatever it was, the next time Duke would make a field goal, Louisville would have run off 20 points and be up 62:48 and they just kept building from there, ultimately getting up 22 at the buzzer.

Kevin Ware in his hospital room with the Regional Finals trophy on Sunday night post-surgery.

Kevin Ware had his surgery Sunday night, the compound fracture required having a rod inserted and the wound closed. He’s scheduled to remain in Indianapolis until Tuesday, then he’ll fly home. His teammates will head to Atlanta, 25 miles away from the high school Ware attended, for their Final Four match-up with Wichita State. Considering the seriousness of the injury, it’s doubtful Ware will be able to attend, but his attendance would certainly be an emotional return for the Wolverines…

Plumlee was top man for Duke with 17 points and 12 rebounds. Curry ended with 12 points after going scoreless in the first half. Quinn Cook dropped in 12 points and dished off 5 assists.