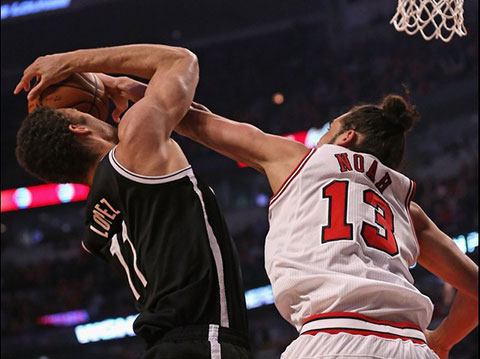 Oracle Arena just prior to the NBA Playoff game between Golden State – Denver.

It’s been five days since the last NBA Playoff series completed. On Sunday, both the Miami Heat and the San Antonio Spurs completed their best-of-seven series with the Milwaukee Bucks (Heat) and the Los Angeles Lakers (Spurs). Both ended in 4-0 sweeps and at the time it looked like a few more were going to be over relatively soon. Skip to Thursday and there’s finally another series in the books as the Golden State Warriors finalized what was becoming an increasingly intense series with the Denver Nuggets with a 92:88 win in Oakland. In the other Thursday contest, the Brooklyn Nets got all the scoring advantage they needed for the night in the first quarter and then held off the Bulls in the last seconds of their Game 6 in Chicago to pick up a 92:95 win to send their series to a Game 7 that will be played at the Barclay Center in Brooklyn on Saturday.

Golden State Warriors – Denver Nuggets, 92:88
The Warriors moved into Round 2 and will next face the San Antonio Spurs after they outlasted the Denver Nuggets at home in the place they affectionately call the “Roar – acle” Arena (Oracle Arena) due to the loud support they get from their fans. Game 1 of Round 2 is set for Monday.

In a day filled with key players making decisions to not play due to injuries or being sick, the Warriors and their fans got a boost from an unlikely source as it was announced just prior to game-time that All-Star David Lee was suited up and available to play. He only played a minute and a half, but was involved in a bit of gamesmanship as Denver coach George Karl called a timeout when he noticed Lee check in, to not give the loud Warrior fans any more reason to turn up the decibel level inside the Arena. After the timeout, Warriors’ coach Mark Jackson had Lee sit down and then had him check in a couple of minutes later, to the thunderous applause Karl was concerned about. Lee only took one shot (missed) and grabbed one rebound, but the fact that he suited and played on what was reported to be a post-season ending torn hip flexor, was added motivation for both his teammates and the Golden State fans, who obviously appreciated his return.

As if that weren’t enough emotion for one day, the Warriors also introduced Aaron Hern in the first quarter. Hern is a local 12-year-old that was injured in the Boston Marathon bombings.

It was announced during the day on Thursday that Jackson was being fined $25,000 by the NBA for his comments regarding Denver’s aggressive play against Stephen Curry. The official line was that he was being fined for attempting to influence the officiating of the series.

Denver built a four-point lead after the first 12, but that was cut to two points in the second quarter, sending the clubs to the halftime break with the Nuggets up 40:42.

Everything changed in the third quarter…

After Andre Iguodala opened scoring in the quarter for Denver, Carl Landry connected on a pair of singles for the Warriors and then Curry hit eight straight on a pair of free throws and back-to-back triples, putting Golden State up six. With just over two minutes to play Klay Thompson dropped in a finger-roll and then Jarrett Jack sank two charity tosses the next trip down the hardwood to put the Warriors up by 13, 71:58. As time ran out in the third 12, the hosts held a 73:62 advantage.

Golden State added seven more to their lead to open the fourth on a lay-up by Harrison Barnes, a three-ball by Draymond Green, and a jumper by Thompson, to get their peak lead of 18, 80:62. Denver wasn’t going to let that be the end of things and ran off 13 unanswered to pull to within five, 80:75, with just under five minutes to play. Kenneth Faried split a pair of singles with 32.4 seconds to play to cut the lead to two, 90:88. Iguodala picked off a Thompson pass on an in-bounds play and got it to Wilson Chandler, who drove the lane and came up empty on a floater, but got his own rebound and then missed the follow-up as well. Jack hit two big free throws with 7.3 seconds to play to send the Warriors to Round 2.

Golden State’s Stephen Curry reacts to a play on Thursday.

This is one of the biggest games in most of the guys on our team’s careers. So to have an opportunity to close it out in front of our own fans, you got a little jitters. But we settled in, in that third quarter, got our rhythm offensively and defensively, opened up an 18-point lead, but we didn’t finish it our way.”
— Stephen Curry

Chicago Bulls – Brooklyn Nets, 92:95
The Bulls and the Nets will take their show back to Brooklyn for a winner-take-all Game 7 on Saturday after the Bulls went out without three starters, Derrick Rose (torn ACL), Loul Deng (flu), and Kirk Hinrick (torn calf muscle). Deng dressed and looking to play, but was sent home by team doctors shortly before the game.

Thursday’s win was the second game in a row that the Nets have won while facing elimination.

Things are looking a lot better for us than they did when we were leaving here last Saturday.
— Brooklyn coach P.J. Carlesimo.

In one of the most entertaining series of the NBA Playoffs so far, it’s certainly fitting that the game came down to the wire.

They were tied at 27 with just over a minute to play in the first quarter, then the Nets ran off six straight to lead 27:33 at the horn. Brooklyn was able to build an eight-point lead early in the second and hold the margin for the better part of the frame before extending that to 10 points inside a minute to play in the half, only to have the Bulls pick up four at the end of the half off a technical. They headed into the dressing rooms with Brooklyn up 54:60 at the break.

After a pair of free throws by Chicago’s Jimmy Butler, Gerald Wallace hit a triple to put Brooklyn up five, 73:78. It would be over two minutes before either team would tally any points again, and when it happened, it was Wallace draining another three-ball to give the Nets their eight-point lead back, 73:81. Butler hit a jumper and Nate Robinson got a fast-break lay-up after a Joakim Noah steal to pull the Bulls to within four, 79:83. Noah got the Bulls to within two, 85:87 with a tip in of a missed Carlos Boozer jumper with four minutes on the clock. Robinson hit a jumper with a minute to play, then Andray Blatche split a pair of singles to put Brooklyn up three, 90:93. Nazr Mohammed dropped in a lay-up with 25.2 seconds to play to get the Bulls to 92:93. Blatche hit two more free throws to make it a three-point game, 92:95, with 19.2 seconds remaining. The Bulls Marco Belinelli launched a long-ball for the tie with 7.9 to play, but came up empty. Noah got the rebound, but stepped on the line. On the in-bounds play, Noah was able to tie up Deron Williams to force a jump ball, but the Nets’ Joe Jackson got control of the tip and ran out the last 3.6 seconds to give Brooklyn the win and tie the series at 3-3.

The Nets got 17 each from Brook Lopez, Johnson, and Williams, with Williams adding 11 assists. Wallace added 15, and Blatche contributed 10 points and 7 rebounds.