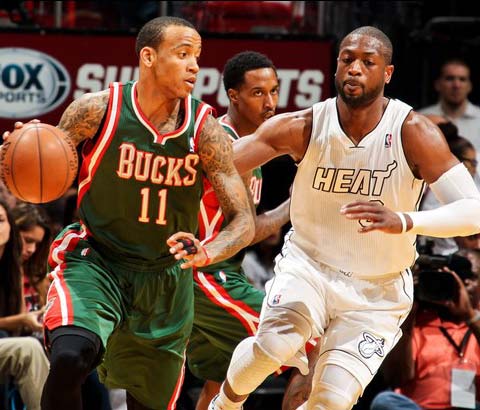 Day 2 of NBA Game 2 saw home clubs improve to 11-2 as the Miami Heat stopped the Milwaukee Bucks, the Knicks routed the Celtics, and the Golden State Warriors knocked down 131 points on 64.6% inside the arc (51-79) and 56.0% outside the arc (14-25) shooting, to tie up their series with the Denver Nuggets at 1 game each. While six members of the Nuggets scored in double figures, the Warriors had four guys drop in 20+ including Stephen Curry’s 30.

Jarret Jack drives by the Nuggets’ Corey Brewer during Game 2 on Tuesday.

The Warriors scored 35 points in each of the last three quarters of their Game 2 contest with the Nuggets in Denver en route to a 117:131 rout to even their best-of-seven series, 1-1.

Denver opened the contest with a two-point advantage after the first frame, but an 0:8 run by Golden State mid-way through the second quarter got them up by 10 and they never looked back…

At the half-time intermission the Warriors were up eight, 53:61, but after Curry hit a jumper and Thompson dropped in a triple to open the second half, the guests held a 13-point margin. After trading baskets for the better part of the third, Harrison Barnes put down a jumper and after a Jarrett Jack block of a Ty Lawson lay-up with 5.9 seconds left, Thompson found a Barnes coming hard down the lane for a dunk that shook the seats in nose-bleed section to give the Warriors a 16-point advantage, 96:80.

Anthony Randolph did his part to get Denver back in the game at the start of the fourth putting in a layup and a jumper to get the Nuggets back to 12 down. Corey Brewer helped chip away more of the host’s deficit with two triples within 25 second to pull to 93:103. After a Barnes nifty reverse dunk off another Thompson assist, JaVale McGee brought Denver to within eight, 97:105. Shortly after the Warriors started hitting shots at will and over the last six minutes went from up eight to an advantage the peaked at 20, 109:129. The Nuggets went 6 of 6 from the line in the last minute and got a dunk from Randolph with 15 seconds left to cut the final margin to 14, 117:131. A small consolation for Nuggets fans is the fact that the 110 points their club put up kicks in a discount on tacos at a local restaurant.

The Nuggets were led by Lawson’s 19 points and 12 rebounds. Brewer also scored 19, the duo of Andres (Miller and Iguodala) dropped in 18 each, and Wilson Chandler and Randolph each chipped in 14.

Game 3 will now move to Oakland on Friday.

Miami Heat – Milwaukee Bucks, 98:86
The Heat took another step towards their quest to repeat as the NBA champions with a 12-point win over the Bucks in Miami. Dwayne Wade led five players from Miami with more than 10 as he dropped in 21 points. LeBron James added 19. The Bucks got 21 from Ersan Ilyasova and 16 from Mike Dunleavy, Jr.

The Bucks did a much better job of hanging with Miami in Game 2, unlike Game 1 where they were dominated by 23. In Game 2, they were only down three points at the end of the third quarter, 65:68, but the Heat got six from Chris Andersen and five from Norris Cole in the opening two and a half minutes of the fourth quarter as part of a 12:0 run. By the time Monta Ellis dropped in a jumper with just over nine minutes to play, the Heat were up 13 and had the game firmly in hand.

Wade added 7 rebounds, 3 assists, and 2 steals to his 21 points to pace the Heat to the win. James scored 19, and added 8 rebounds and 6 assists. Chris Bosh, Shane Battier, and Andersen all contributed 10 points.

Ilyasova’s 21 was tied for game-high with Wade, he also added 6 rebounds to his totals. Dunleavy contributed 6 rebounds and 5 assists to his 16 points, and Larry Sanders added 14 points, 6 rebounds, and 2 assists for the Bucks.

Game 3 will be held on Thursday in Milwaukee.

J.R. Smith picks up his hardware on Tuesday night after being named the NBA’s “Sixth Man of the Year”

The Knicks entertained 19,000 at the Madison Square Garden with a 16-point victory over perennial rivals, the Boston Celtics, to take a 2-0 lead in their best-of-seven series. The two clubs will square off in Game 3 at the TD Garden in Boston on Friday. Carmello Anthony brought his playoff average to 35.0 with a 34-point performance that included 10 of 11 from the line. Paul Pierce did what he could for the Celtics, scoring 18, while grabbing 6 rebounds and dishing off 6 assists. The Knicks simply outshot Boston, taking (and making) six more shots inside the arc, making 32 of 76 vs. 26 of 70 for the guests.

The Knicks closed out the first quarter up six, 26:20, but Boston came back with a solid second frame, outscoring New York 16:28 in the second, to take a 42:48 lead to the half-time break. The key to the second frame was the 0:11 run the Celtics put together early on, that included four different players scoring, including Kevin Garnett, who got into foul trouble early and had to sit most of the first quarter with two fouls. Boston got up by as much as nine, but settled with a six-point advantage heading into the second half.

The Knicks came out of the break with a fire lit under them, as Iman Shupert knocked down consecutive triples to kick off a 13:2 run that got them a 55:50 lead mid-way through the quarter. After Jeff Green connected on a pair of singles for the guests, New York added 11 more unanswered, including seven from Anthony. By the end of the third 12, the Knicks had outscoring the visitors 32:11, taking a 74:59 lead into the final frame.

The last quarter was relatively uneventful as neither team could connect on anything with consistency and the Knicks dropping in one more than Boston, finishing the forth 13:12, to wrap up the scoring at 87:71. With the series at 2-0, the clubs shift the next two games to Boston, with Game 3 being held on Friday and Game 4 will be on Sunday.

Anthony’s 34 points was game-high for the Knicks, followed by J.R. Smith’s 19 points. Smith was named the NBA’s ‘Sixth Man of the Year’ on Monday and received his trophy in a pre-game presentation on Tuesday. Raymond Felton dropped in 16 points, while grabbing 7 rebounds for the Knicks.

Piece’s 18 points was in addition to 6 rebounds, and 6 assists. Garnett scored 12 and added 11 rebounds, and the duo of Green and Crawford scored 10 each.