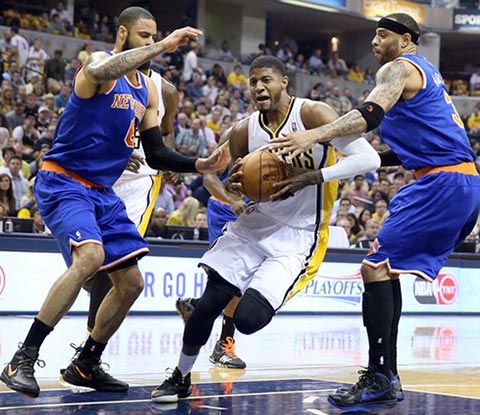 Two more NBA Conference semifinals have moved to within one game of being completed as the Indiana Pacers went up 3-1 with a 93:82 win in Indianapolis and the San Antonio Spurs improved to 3-2 over the Golden State Warriors after they ran away with Game 5, 109:91, in San Antonio.

Both series will change locations again, Game 5 for the Pacers-Knicks will take place in New York on Thursday, and the Spurs-Warriors will square off in Game 6 in Oakland, also on Thursday. On Wednesday the Miami Heat will look to wrap up their series with Chicago in Miami, and the Thunder will try to extend their series with Memphis at home in Oklahoma City.

Indiana Pacers – New York Knicks, 93:82
Led by 26 points from George Hill, the Pacers won their third game in their best-of-seven series against the Knicks in front of over 18,000 at Bankers Life Fieldhouse. The Pacers had five players score in double figures with Paul George and David West tallying double/doubles.

We’re a deep team and the way we played tonight we can be a great team. Everybody had a hand in the pile.
— Pacers’ George Hill

Indiana opened the first frame getting up 11:3 with six from George and five from Lance Stephenson. The Knicks went on a 1:7 run to close the gap and shortly after knot the score at 14, but the Pacers outscored their guests 9:2 in the final three minutes to take a 23:16 advantage into the second quarter.

J.R. Smith opened the scoring in the second with a triple, but Indiana countered with a free throw after an Amar’e Stoudemire technical and then back-to-back three-balls from D.J. Augustine and Sam Young, to put the hosts up 11, 30:19 with only two and a half minutes expired in the second. Carmelo Anthony knocked down the next seven points NY would tally, then Ray Felton scored in the paint to cut the margin to five, 35:30. The Pacers used the end of the half to again put distance between them and the Knicks, this time with a 13:2 run that had given them a 48:32 advantage until Anthony connected on a jumper with 0.4 seconds on the clock, sending the clubs into the break with Indiana up 48:34.

The Knicks were able to cut the deficit down to 11, then the Pacers hit seven straight to extend their lead to 18, 61:43. New York rallied over the last half of the third to get back to down 11, to head into the fourth frame with the score at 67-56.

Not long after play resumed in the fourth the Knick cut the gap to eight, 69:61, but seven unanswered from the Pacers got the hosts back up 15 with eight minutes to play. The Knicks wouldn’t challenge, but Smith did get the guests to within 10 with a triple with just under two minutes to play. Unfortunately for the Knicks, that’s as close as they’d get, which means they will be fighting elimination when play resumes on Thursday with Game 5.

It takes four games to get out of this series. We go home, we handle our business at home and we get back here on Friday and see if we can force Game 7. That’s what I’m thinking. That’s the only way I’m thinking.”
— New York coach Mike Woodson

San Antonio’s Tony Parker goes up for two of this game-high 25 against the Warriors on Wednesday.

As the Spurs – Warriors series has progressed, the Warriors’ backcourt duo of Stephen Curry and Klay Thompson have lit up the scoreboard with some rather impressive numbers. The pair have held their place in Spurs’ coach Gregg Popovich’s post-game pressers from the first game with Curry dropped in 44, and Thompson only hit 19. After Game 2, Popovich commented that it was nice of the pair affectionately called the “Splash Brothers”, to not be hot on the same night as Curry only scored 22, while Thompson tallied 34. Tuesday night their combined production was the lowest it’s been all year with Curry scoring 9 and Thompson only connecting on 4 (they have averaged 260 and 20.0 during the post-season), including not attempting a three-pointer for the first time this season (Thompson has played in all 92 games the Warriors have played).

Harrison Barnes became the first player in NBA history to score 25 points in consecutive games while being younger than 21. Only Barnes, Kobe Bryant and Magic Johnson have scored 20 points in four post-season games.

The clubs went right at it in the first quarter of Game 5, combining for 65 points in the first 12 minutes of play with the Spurs coming out with a nine-point lead, 37:28. Mid-way through the first the Warriors held a 12:15 lead, until the hosts ran off 15 straight to get up 27:15. Over the last three minutes of the quarter the Warriors outscored the Spurs 10:13, with Barnes hitting nine and Jarrett Jack knocking down seven for Golden State, and Kawhi Leonard tallying seven in the first 12 for the Spurs.

Richard Jefferson hit five in the first two minutes of the second to help cut the gap to six, 40:34. Curry hit a layup, and Carl Landry threw down a dunk off an assist by Curry to pull the guests to within two, 44:42. With 1:42 to play in the half Curry sliced the cords with a long-ball to cut the margin to one, 52:51. Leonard sank a jumper shortly after to wrap up the scoring for the half with SA up 54:51.

Mid-way through the third the Spurs scored seven unanswered with Danny Green connecting on a three-ball and a jumper to give the hosts an 11-point lead. Jack hit a three-pointer and a jumper to cut the lead to six, 71:65. With just under a minute to play Leonard got an offensive rebound, kicked the ball out to Joseph and got the return pass for a triple that hit the bottom of the net to push the lead to 14, but by the end of the quarter the advantage was 83:72, Spurs.