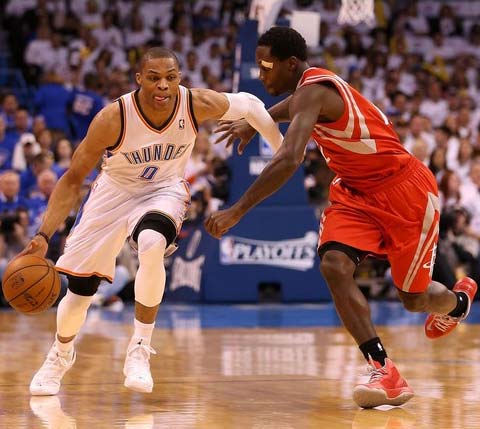 The final three groups put in their second games in the NBA playoffs on Wednesday night, with all three home clubs picking up their second wins. This brings the home club (high seed) advantage to 14-2 and has six series at 2-0, with two now at 1-1 (Denver – Golden State and Brooklyn – Chicago). In the game of the night, the Houston Rockets took the Oklahoma City Thunder to the wire before falling 105:102, despite OKC holding a 15-point advantage with nine minutes to play. In the other two contests Indiana outscored Atlanta in all four quarters en route to a 113:98 win and a 2-0 series lead, and the San Antonio Spurs got up 2-0 on the LA Lakers with a 102:91 win.

Oklahoma City Thunder – Houston Rockets, 105:102
In a game of huge scoring runs the Thunder needed all 48 minutes to pick up their second win against the Rockets. James Harden dropped in 36 points for Houston to lead all scorers, while Kevin Durant and Russell Westbrook each scored 29 for OKC.

Houston built the largest margin of the first half running off seven unanswered after OKC scored the first basket of the night, to get up by five, 2:7. For the rest of the initial 24 minutes, neither team would get up by more than four. It was a far different Rockets team than the one that lost Game 1 by 29 just a few days ago.

Westbrook got into foul trouble late in the first quarter and wouldn’t return until three minutes into the second. Houston’s Jeremy Lin was apparently hurt (chest bruise) at the end of the first half and after warm-ups determined that he couldn’t continue in the second half.

In the second half, the Thunder used a 13-point run, with seven from Westbrook, to build an 11-point advantage, 74:63, with just under four minutes to play in the third. The clubs exchanged baskets for the next three minutes with Westbrook knocking down his 22nd point on a jumper with just over a minute to play to put OKC up 10, 78:68. To close out the frame Houston’s Omer Asik and Harden connected on a pair of singles each to cut the lead to six, 78:72, heading into the fourth.

The Thunder got the first five of the fourth, then Harden dropped in a layup, countered by a pair of OKC triples, one by Westbrook and one by Kevin Martin, to put the Thunder up 15, 89:74, with nine and a half minutes to play. Houston switched to a 2-3 zone and took Oklahoma City out of their rhythm, along with a 2:21 run over the next five minutes to get up 91:94 with three and a half minutes to play. Oklahoma City got the next four to knot the score at 95, then a Harden drive the lane for layup to put Houston back up two. The turning point was the next six points, coming off two triples from OKC, including Durant’s first field goal in 14 minutes. After Thabo Sefolosha’s triple, the Thunder held a 101:97 advantage with a minute to play. Harden split a pair of free throws, then Ibaka connected on a jumper, followed by a pair of Harden free throws, to put the score at 103:100 with 14 seconds to play. Martin was fouled with 12 seconds left and he split the pair to put the hosts up four. Patrick Beverly knocked down a floater for Houston with 1.6 on the clock to cut the lead to two, 104:102. Durant was fouled on the inbounds play with a second left. He hit the first charity toss, but missed the second, Carlos Delfino grabbed the rebound for Houston, but all he had time to do was fire up a nearly full-court shot, preserving the Thunder’s second win in the best-of-seven series.

Durant and Westbrook led OKC with 29, Durant scoring 21 in the first half. Ibaka added 12 points and 11 rebounds, Sefolosha dropped in 11 points and grabbed 7 rebound, and Martin contributed 10 points.

Game three will be played Saturday in Houston.

Indiana Pacers – Atlanta Hawks, 112:98
Prior to the tip-off, Paul George was presented with the NBA’s Most Improved Player award. George would follow up his triple/double from Game 1 with a 27 point, 8 rebound night to take a 2-0 into Atlanta, a venue the Pacers haven’t won in since 2006 (11 games). Game 3 will be played on Saturday.

The Pacers would outscore their guests in every quarter, building a 59:50 lead by half-time and continuing to add to that as the second half progressed and ending with a 15-point victory.

The guests grew increasingly frustrated as the game played out, to the point that they were whistled for three technicals for arguing calls.

“The one thing we’re finding out in this series is the importance of sustaining for 48 minutes. We have not done that thus far. For three quarters, the tempo was kind of where we wanted it but we made too many mistakes — not turnover mistakes, but mistakes in the defense. The margin for error against a team like this is very small and we have to be better.”
— Atlanta Coach Larry Drew

George’s 27 was game-high for Indiana. Hill added 22, and the duo of Hibbert and Gerald Green added 15 points each. Hibbert also grabbed 9 rebounds on the night.

San Antonio Spurs – Los Angeles Lakers, 102:91
Tony Parker scored 24 of his game-high 28 in the second half as the Spurs improved to 2-0 in their best-of-seven series with the Lakers. Dwight Howard teamed up with Steve Blake to led the Lakers with 16 each, despite Howard heading to the pines early in the third quarter with four fouls and not returning until the beginning of the fourth.

The clubs battled to a 22-all tie with a minute to play in the first, then the Spurs got three-balls from Manu Ginobili and Gary Neal around a split set of singles by Howard, to go up 28:23 after the first quarter. San Antonio got the first three points of the second to extend their lead to five, before the Lakers would connect on seven unanswered to take the lead at 30:31. The hosts would close out the first half on a 13:4 run, including two triples by Ginobili) to head to the dressing rooms with an eight point advantage, 56:48.

The first five of the second half would also come from the Spurs, with Parker opening the score with a jumper, followed by a layup by Tiago Splitter and Parker dropping in a technical free throw after Howard protested, loudly, his third foul, which put the hosts up 13, 61:48. The Lakers closed the gap to six right after on a 4:11 run. Parker scored the Spurs next 10 points and helped push the lead back to 10, 75:65, with just over three minutes to go in the third, which is the margin they sat at as the horn sounded to end the frame. As the clubs prepared for the final 12, the Spurs held a 10-point lead, 78:68.

Tim Duncan kissed a jumper of the glass with just under eight minutes to play and start a seven-point run that would put the Spurs up 17, 91:74, with just over six minutes on the clock. The guests put up eight unanswered to cut the lead to nine, 93:84 with just under three left. Parker put the Spurs on his back and carried them to the line as he put down seven straight of his own, to essentially close the door on a Lakers’ comeback by extending the margin back to 16 with just over a minute to play. Los Angeles scored seven of the last nine points in the final minute, to close the margin to 11 with a Darius Morris triple with 0.2 on the clock.

The Lakers got 16 from both Howard and Blake, with the duo also grabbing 9 and 6 rebounds, respectively. Metta World Peace hit 13 points and grabbed 5 rebounds, while Pau Gasol contributed 13 points, 9 rebounds, and 4 assists. Morris added 10.

The series will continue with Game 3 in Los Angeles on Friday.