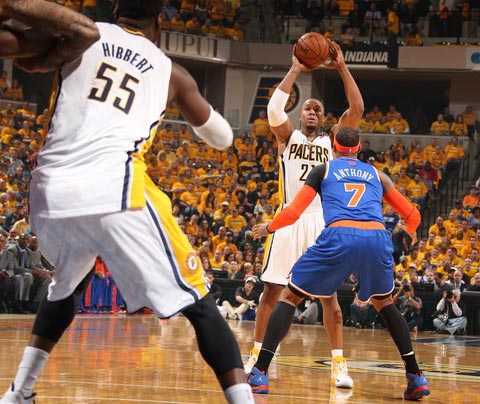 The home clubs grabbed their second wins of the NBA Conference semis on Saturday as the Indiana Pacers controlled the second half against the New York Knicks to take a 2-1 lead in their best-of-seven series and the Memphis Grizzlies tallied the last six points of their Game 3 match with the Oklahoma City Thunder after the guests knotted the score at 81 with a minute to play.

Memphis Grizzlies – Oklahoma City Thunder, 87:81
OKC came back from a six-point deficit with just over five minutes to knot the score at 81 with a minute to play, only to have the Grizzlies run off the last six points of the game at the charity stripe to grab Game 3 and a 2-1 advantage in the series. Marc Gasol netted 20 for Memphis, while Kevin Durant dropped in 25 for the Thunder.

We did everything but make shots.
— Oklahoma City’s Kevin Durant

Memphis got the first ‘big’ lead of the night scoring six unanswered at the end of the first 10 with a Quincy Pondexter lay-up and two pair of singles, one from Keyon Dooling and one from Tony Allen. A lay-up from both clubs closed out the quarter with the Grizzlies up four, 22:18.

Jerryd Bayless knocked down three consecutive jumpers to open the second and get the hosts up 10, 28:18. Durant took over after the last jumper with a free throw, a rebound off a missed Bayless triple that turned into a lay-up, then a triple resulting from a rebound off a missed Darrell Arthur jumper. A 2:8 run by the Thunder that started at the mid-way point in the half, tied the score at 40. Zach Randolph and Pondexter scored in the paint to get up four, 44:40, but Reggie Jackson hit a three-ball and Kevin Martin’s lay-up put OKC up one heading into the break, 44:45.

Two minutes into the second half Gasol dropped in a pair of free throws, then two short-range jumpers, to put Memphis up three, 50:47. At the mid-way point, Mike Conley, Gasol, and Pondexter combined for a seven-point run to put the home club up 57:50 with six minutes to play in the quarter. The Thunder cut it by four, then with two and a half minutes left they got six straight to get up by nine, 66:57. Durant nailed a triple with 28.8 to get the Thunder back to within 66:60.

Dooling hit a triple to push the lead back to nine, but OKC hit eight straight to pull to within one, 71:70. Bayless and Pondexter connected on threes to extend back to seven, 77:70. a 4:11 Oklahoma scoring drive tied the score at 81 with two minutes to play. With 1:03 to play, Serge Ibaka fouled Gasol, sending him to the line for two free tosses. After Gasol dropped in his singles, Durant missed a jumper that was rebounded by Gasol. Jackson fouled Conley, who sank his charity tosses. On the other end, Gasol fouled Durant, who missed both of his free throws. Bayless threw the ball away giving the Thunder an opportunity to cut the lead to one with a triple, which Derek Fisher missed. Pondexter got the rebound and sent it up the court to Conley, who was fouled by and tallied the final points of the contest. The Thunder still had 15.5 to close the margin, but they only got one shot off, a triple by Martin, that came up empty.

We were fortunate down the stretch that some plays went our way. Obviously they beat us in a lot of different areas tonight. For us to come away with the win, we are very happy. We’ll take it, but it just goes to show we have a lot of work to do.
— Mike Conley Memphis Grizzlies.

Gasol was high-man for the Grizzlies with 20 points, 9 rebounds, and 4 assists. Allen and Conley added 14 each, with Conley also contributing 7 rebounds and 6 assists. Bayless scored 11, and Randolph added 8 points and 10 rebounds.

Durant was game-high for OKC with 25 points, 11 rebounds, 5 assists, and 3 steals. Jackson got his first double/double with 16 points and 10 rebounds. Martin scored 13, and Ibaka contributed a 13P/10R double/double.

Game 4 will be played Monday in Memphis, with Game 5 heading back to Oklahoma City on Wednesday.

The Pacers’ George Hill dishes the ball off to the box as Pablo Prigioni defends.

A pair of Georges opened the contest for the Pacers with three triples as George Hill hit the first two, and then Paul George sank the third after Tyson Chandler hit a jumper for the Knicks to give Indiana a 9:2 lead. Carmelo Anthony sank the next five for New York with a his only three-ball of the game and a pair of singles, to start a 2:11 run for the guests that would give them an 11:13 lead. Indiana hit the next seven to get up by five, then Anthony hit a jumper to send the game to the second quarter with the Pacers up 18:15.

Roy Hibbert and Ian Mahinmi tallied deuces to extend the lead to seven. Shortly after, an Andre Stoudemire dunk put an exclamation mark on his return to court after two months (March 7) on the DL with an injury, which was followed-up by three singles from Anthony to pull the Knicks back to within two, 24:22. Hibbert and West countered with eight unanswered to swell the advantage to 10, 32:22, but over the last two and a half minutes, New York outscored Indiana 2:9 to cut the gap to three, 36:33.

I think this is his best playoff game ever, probably. He’s oozing confidence.
— Indiana coach Frank Vogel on Hibbert

Hill and George opened the second half by hitting a three-pointed on each side of an Anthony jumper. Mid-way through the frame the Pacers had a five-point advantage the grew to 14 points on a nine-point run. The Knicks got five from Stoudemire and four from J.R. Smith in the last three minutes, while the Pacers got a triple from Lance Stephenson, setting up the final quarter with Indiana up 62:53.

Hibbert split a pair of free throws, that combined with a jump hook got the Pacers back up by 12, 65:53. Ray Felton connected on a three-point play to get the margin back under double digits. George sank a pair of singles, D.J. Augustin connected on a three-ball and Hibbert tipped in a missed Augustin triple to put the hosts up by their biggest margin, 15., with just under seven minutes to play. For the next four minutes of play, neither team would connect on anything other than free throws. David West killed the drought with a dunk, followed-up by a Hill long-ball, giving Indiana a 16-point lead, 80:64, with two minutes to play. The Knicks would finish the contest on a 2:7 run to cut the lead to 11, 82:71.

Offensively we just didn’t have anything — either team. It was an ugly game, offensively.
— New York coach Mike Woodson

Saturday’s game marked the seventh straight game the Knick’s guard Jason Kidd has been held scoreless. He was 0 for 14 from the floor, including missing nine from behind the arc.

Anthony was the only member of the Knicks that scored in double figures with 21. Chandler and Smith hit 9.