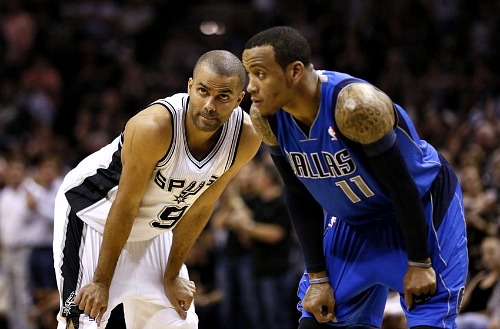 The 2014-15 NBA season is officially underway! The league treated its fans to a trio of games on opening night and the six teams that took to the hardwood floor did not disappoint one bit. Two blow-out wins sandwiched a tight nailbiter. A young phenom barely misses a rare triple-double, a promising rookie suffers a tragic injury, and the defending champions show why they are the favorites to take another trophy home this season.

This was a duel between two of the league’s most promising young big men. Pelicans’ Anthony Davis was one block shy of a rare triple-double performance, finishing with 26 points, 17 rebounds, and nine blocks. He battled in the paint against Orlando’s Montenegrin rebounding maven, Nikola Vucevic, who showed why he deserved his recent contract extension. Nik scored 15 points and cleaned up on the glass with 23 rebounds! He also added four blocks.

Neither player could carry the game by themselves, and on this night Davis got the better support from his teammates to wind up with the victory. Both teams kept the game close in the first quarter, with Orlando managing a 25-24 advantage at its end. The second and third quarters was when the Pelicans came together as a flock and flew away with some excellent offense. Ryan Anderson, who is coming back from a dangerous neck and back injury in 2013-14 took control of the third quarter as he stretched out the Magic’s defense with his shooting from long range. He scored 22 points in 22 minutes off the bench, knocking down 3-of-6 triples.

The Magic were missing the services of second-year guard Victor Oladipo, who is going to miss the first month of the season with a facial fracture. Tobias Harris did his best to step up with a team-high 25 points, but it was not enough to match New Orleans’ execution on offense.

This was an exciting battle between two teams from Texas. The 2011 NBA champions Dallas Mavericks hosted the current defending champs San Antonio Spurs. It appeared to a business-as-usual night for the visitors, despite missing 2013-14 Finals MVP Kawhi Leonard, the Spurs were in mid-season form and already firing on all cylinders. Both teams fought with a lot of intensity and if no one told you it was an opening night game, you could swear that you were watching a Western conference Playoff series.

Just when the Spurs were looking like they were going to cruise to victory with a comfortable 10-point lead, the Mavs rallied and clawed their way back in the final period, almost stealing the win at home. Recently signed Chandler Parsons had an open look from beyond the three-point arc with a few seconds left in regulation, but hit all rim with his Hail Mary shot.

Frenchman Tony Parker looked fresh and it appears that he made the right decision to rest and skip the 2014 FIBA World Cup. He had 23 points and 3 assists, shooting 9-of-15 from the field and he also nailed all four of his attempts from three-point range. The ageless Argentinian Manu Ginobili chimed in with 20 points and six assists in 28 minutes off the bench.

Dallas was led by Monta Ellis, who scored a game-high 26 points. German forward Dirk Nowitzki looked leaner and light on his feet as he added 18 points and six rebounds.

Two of the league’s (world’s) best shooting guards took to the court. Kobe Bryant led his injury-riddled Los Angeles Lakers as they came to Houston to face James Harden and the Rockets. Bryant, who at 36 years of age is attempting to put together a comeback season after undergoing two major surgeries to his Achilles and Knee. Harden and fellow All-star Dwight Howard are out to prove that they are a core duo capable of taking Houston deep into the post-season in the deadly Western conference.

Harden got the better of Bryant in this encounter as he came up with an easily notched 32 points to lead his team. The Rockets took home an easy win, considering they faced the most injured team in the league. The new-look Lakers were unable to give Byron Scott his first W at the helm of the L.A. franchise. Bryant mustered 19 points to lead the Lakers and looked healthy. Unfortunately, the Lakers’ rookie Julius Randle suffered a broken leg, adding to the Lakers’ health woes. He was selected seventh overall in the 2014 NBA Draft and it’s heartbreaking to see the young rook begin his professional career on such a sour note.

Kobe Bryant and former teammate Dwight Howard were each awarded technical fouls as they exchanged barbs when Howard swung his elbows while being defended by Bryant. Clearly, there has been no love lost between these two players, since Howard’s controversial brief stint in L.A.

The NBA season is finally here and fans around the world are more than happy to enjoy some of the World’s best basketball!