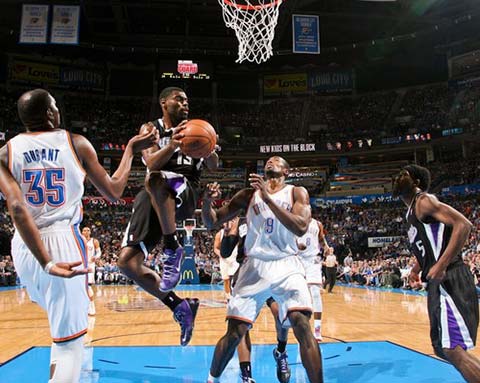 James Anderson (5) of the Rockets tries to score around Cole Aldrich of the Kings.

The NBA schedule shows a total of 18 games remaining in the 2012-13 season and all but one of the 16 total playoff spots have been spoken for. It should be noted that the Boston Celtics – Indiana Pacers contest set to tip off at 8pm EST Tuesday night, has been canceled by the NBA out of respect for the tragic events of Monday’s Boston Marathon where a reported 144 people were injured and three were killed.

The only unspoken for seat at the table is the eighth and final spot in the Western Division. Currently, The Los Angeles Lakers are in eighth place at 44-37, one game ahead of the Utah Jazz at 43-38. Ahead of the Lakers in the seventh spot is the Houston Rockets, the team they are scheduled to finish the season against on Wednesday night. The Rockets are currently 45-36, one game up on the Lakers.

The Lakers’ Dwight Howard takes the ball to the basket against Spurs’ Tim Duncan.

Here’s out the last games can play out to wrap up the final spots:

1). Utah loses to Memphis on Wednesday – Utah out, Lakers finish no worse that eighth, but their position will be determined by their game with the Rockets.
2). Lakers defeat Houston – Utah out regardless of the result of Utah-Memphis as they’d be one game down on the Lakers. Houston finishes eighth due to the Lakers having a better conference record as they would be 2-2 head-to-head. Lakers finish seventh.
3). Lakers lose to Houston and Utah beats Memphis – Lakers out, Utah finishes eighth due to winning head-to-head competition with Lakers 4-1, the teams would have an equal conference record at 27-25. Houston would finish seven

Oklahoma City has clinched the top spot in the Western Conference and San Antonio is locked into the No. 2 spot.

If Denver beats Phoenix on Wednesday, they will finish third. If they lose and the LA Clippers win both of their remaining games (at home against Portland Tuesday and on the road against Sacramento on Wednesday), then the Clippers will end up in the No. 3 spot and Denver will drop to No. 4 as they win the tie break with Memphis, should Memphis beat Utah on Wednesday. One loss by LAC puts Denver in the No. 3 positions and the Clippers in No. 4. Two losses by LAC and they move to the fifth spot and Memphis moves to the No. 4 spot regardless of the result against Utah. If Memphis wins and Denver loses, they will each have a 56-26 record, but Denver wins the head-to-head tie-breaker 3-1.

Currently Golden State is in sixth at 46-35 and Houston is in seventh at 45-36. Golden State finishes on the road against Portland, a team they are 3-0 against thus far this season. Houston wraps up on the road against the Lakers a club they are currently 2-1 against. If Golden State loses at Portland and Houston beats the Lakers, Houston will win the tie-break with the Warriors on a 3-1 head-to-head record, GSW would be seventh and the eighth spot would be determined by the Utah-Memphis game, Utah wins, they get eighth and the Lakers are out, Utah loses and the Lakers are in and the Jazz clean out their lockers.

On the other side of the league, things are a lot cleaner…

No. 1 with the best record in the NBA is the Miami Heat at 65-16 with one game at home against Orlando. The No. 2 spot goes to the New York Knicks at 53-28, with one game remaining against Atlanta at home. The No. 3 spot goes to Indiana for winning the Central Division and No. 4 spot will go to Brooklyn, who has one game remaining and is one game behind Indiana. If they tie, the tie-break goes to the team that has won their division. The No. 7 seed goes to Boston and the No. 8 seed was earned by Milwaukee.

The No. 5 and No. 6 are up in the air between Chicago and Atlanta. Currently, Atlanta is 44-36 with games remaining against Toronto at home on Tuesday and on the road against the Knicks in New York to close out the regular season. Chicago is 44-37 with one contest remaining against Washington at home on Wednesday. If the teams end the season with tied records, Chicago wins the tie-breaker on a 2-1 head-to-head record.

If the playoffs started today, the match-ups would be:

Western Division:
No. 1 Oklahoma City Thunder vs. No. 8 Los Angeles Lakers
No. 2 San Antonia Spurs vs. No. 7 Golden State Warriors
No. 3 Denver Nuggets vs. No. 6 Houston Rockets
No. 4 Los Angeles Clippers vs. No. 5 Memphis Grizzlies