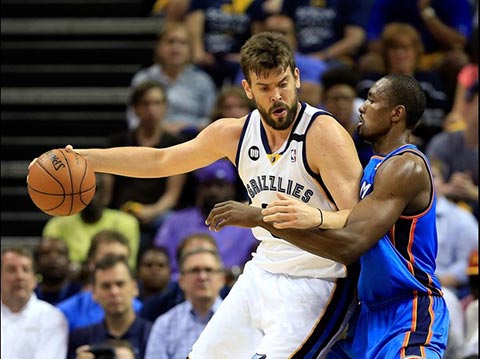 LeBron James flies for a basket against Chicago.

Two NBA Conference semifinal Game 4s were on the schedule Monday, with Miami coming in up 2-1 on Chicago as they hit the hardwood at the United Center, and the Memphis Grizzlies held a 2-1 advantages on the OKC Thunder before their G4 contest in Memphis. At the end of the day both the Heat and the Grizzlies moved to within one game of the Conference finals.

Chicago Bulls – Miami Heat, 65:88
LeBron James scored 27 and Chris Bosh hit 14 as the only members of the Heat to score in double figures, while Chicago had four players score 10 or more, yet the Heat put 23 on the Bulls to go up 3-1 in their best-of-seven series. While the final score shows that the Heat ran away with Game 4, the Bulls were still in the game early in the third until the Heat went on a 3:15 run to end the third frame.

The Bulls found getting the ball to fall through the hoop difficult, especially from long-range, where they could only manage to connect on 2 of 17 (11.8%), overall they only shot 19 of 74 (25.7%). Nate Robinson had a particularly tough time shooting 0 for 12.

You don’t miss the shots you don’t take. You have to think you are going to make the next one.
— Bulls guard Robinson

The Heat set the tone in the first four and a half minutes of Game 4’s tip by running off 11 unanswered after Carlos Boozer scored the first two points of the game. By the end of the first quarter Miami had built a six-point lead, 15:21.

Yeah, it’s been that kind of series…

The second started as the first did, with Miami putting up nine quick points off a three-point play and two triples, all in under a minute and a half. The 2:9 run put the Heat up 13, 17:30. Chicago was able to cut the gap to seven during the frame, but the guests extended back to 11 as the first half ended.

After Bosh sank a jumper, the Bulls ran off six straight to pull within seven, 39:46. Over the last eight minutes of the third 10 the Heat outscored Chicago 3:15 to head into the final quarter up 42:61.

The clubs battled in the fourth, but the Bulls couldn’t manage to cut the margin, as the Heat wrapped up their third win of the series, 65:88. Game 5 will return to Miami on Wednesday.

James was game-high with 27 points 7 rebounds, and 8 assists. Bosh added 6 rebounds to his 14 points.

The Bulls got 14 points and 12 rebounds from Boozer, 12 points from Jimmy Butler, Richard Hamilton scored 11, and Taj Gibson scored 10 points and hauled in 9 rebounds.

Memphis Grizzlies – Oklahoma City Thunder, 103:97
The Grizzlies fought back from a 17-point deficit to tie things up and send it into over time, where they took control and picked up their third win with a shot at wrapping their series up on Wednesday in Oakland.

The Thunder opened the contest with the first seven points, but Memphis caught up quickly and the clubs added to their lead exchange totals until there were four minutes left in the first. OKC then built an 11-point lead as the frame expired, 18:29.

Memphis continued to chip away at the lead, getting the first four points of the second half and drawing to with to four, 52:56. Oklahoma City extended the lead back to 10 before Memphis again fought back and with 1:46 left in the quarter, Marc Gasol brought the Grizzlies back to even at 72 each. They finished out the rest of third by exchanging mostly free throws, 76:76.

As has been the case more than 60 times in this series, the clubs exchanged buckets for the an entire final 10 with neither team getting more than a three point lead. With a minute left in the game, Zach Randolph and Gasol split a pair of free throws each and Kevin Durant drove the right side of the lane before dropping in a finger roll to tie things up at 94.

Memphis took control in the OT frame, hitting the first four points. Fisher countered for the Thunder with a three-ball to pull the Thunder within one. Fisher’s triple was the last Thunder points of the game as the Grizzlies closed the contest connecting on the last five.

Mike Conley led Memphis with 24 points, Gasol and Randolph each scored 23 and grabbed 11 and 12 rebounds, respectively.