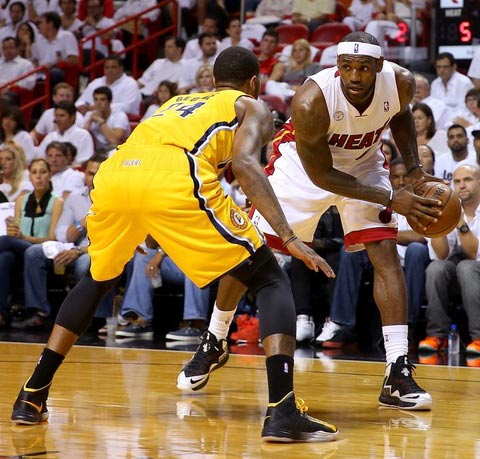 Miami’s LeBron James drops in the game-winner just before the final horn sounds on the OT of Game 1 against the Pacers.

Second guessing a coaching move is something that is common, but when a decision potential costs a team at the professional level, that second guessing hits a frenzied state in a hurry. In Game 1 on the NBA Eastern Conference Finals, Indiana Pacers’ coach Frank Vogel decided to pull big man Roy Hibbert in the final minutes of an overtime frame, which left the inside exposed, causing the talking heads to question the decision. The Miami Heat went on to win Game 1 in an extra frame on a LeBron James lay-up as time expired, after the clubs ended regulation knotted up at 92. Would Hibbert’s presence been made a difference? It’s a question that will most likely be asked for years to come, but the reality is, Indiana blew an opportunity to take a game from the defending champions on their home court. It was Hibbert that many have credited for turning the momentum in the Pacers’ final game with the Knicks when he blocked a Carmelo Anthony dunk attempt at the end of the game.

That’s the dilemma they present when they have Chris Bosh at the five spot and his ability to space the floor. We put a switching lineup in with the intent to switch, keep everything in front of us and try to go into or force a challenged jump shot. We pushed a little bit too much. LeBron was able to beat us off the bounce.
— Pacers coach Frank Vogel

For James’ part, the reigning NBA MVP ended the contest with a triple double, 30 points, 10 rebounds, and 10 assists, in guiding the Heat to a 1-0 lead in their best-of-seven series with the Pacers. Game 2 will take place on Friday in Miami.

Paul George, who was guilty of overplaying James on a well-drawn up play with 2.2 seconds remaining in OT 1 giving James an open lane, was team-high with 27 points. George had hit a triple, over James, with less than a second to play to send the game to the add-on stanza and dropped in three free throws with 2.2 seconds left in the overtime to put the Pacers up one.

James put down nine in the first quarter, leading Miami to a 22:21 advantage after the first 12.

Indiana went on a 4:10 run starting mid-way through the second frame to go up 32:39 with just under three minutes to play in the half, but Udonis Haslem got a dish from James and threw down a dunk and then Mario Chalmers hit a triple to pull the Heat to within two, 37:39. Tyler Hansbrough dropped in a lay-up and Hibbert split a pair of singles to put a cap on the first half scoring with the Pacers up five, 37:42, as the clubs headed to the locker rooms for the intermission.

The Pacers’ Roy Hibbert takes the ball to the hole against Dwyane Wade and LeBron James.

The Heat covered the difference in the first two minutes of the fresh half with buckets in the paint by Chalmers and Dwayne Wade and a Chris Bosh jumper, giving Miami the lead again at 43:42. George gave the lead back to Indiana with a dunk, then Wade split a pair of free throws and James hit a triple then with a kiss off the glass he put the hosts up five, 49:44, also marking a 12:2 run to open the half. Shortly after, the Pacers ran off seven straight to get up 53:58 with just over three minutes left in the third 12. Bosh got a deuce in the paint, was fouled by Hibbert and put the three-point play in the book with the single to cut the margin to two. D.J. Augustin split a pair of charity tosses, followed by a pair of singles by James to make it a one-point contest with the Pacers up 58:59. The next four possessions alternated the gap from one and three points, but always with the Pacers on top. Shane Battier had an opportunity to knot the score, but missed the front end of his set of free throws. Hansbrough knocked down a jumper for the Pacers with 27.2 on the clock and Chris “Birdman” Anderson picked up his eighth point with another assist by James that ended in a lay-up in the closing seconds of the frame, to end scoring with Indiana still up one. 64:65.

Miami finally pulled even with an Allen long-ball, tying the score at 67. A minute and a half later the Heat got their first lead since mid-way through the third, with a James three-point play. The fourth 12 was a battle that included multiple lead changes and ties, and it wasn’t until Miami went up by five with two minutes on the clock that either team could get more than a three-point margin. As soon as the Bosh turnaround jumper gave Miami the 89:84 advantage, Hibbert knocked down a hook in the paint and David West knotted the contest again, this time at 89 with 54.6 to play. Wade put the Heat up by a deuce with 42.6 on a lay-up, than Allen was fouled by Hill and split the pair to put the Heat up three, blowing an opportunity to make the game a two-possession contest. After a pair of timeouts by the Pacers, they drew up a play to get a three-ball look in the last 11.9 seconds. George got the ball on a hand-off to the left of the top of key and pulled up with a jumper over James that sliced the cords with 0.7 to play in regulation pulling them even at 92. Allen got an open look on a catch-and-shoot, but the attempt from the corner hit the side of the backboard, sending the clubs into an extra five.

The OT was the same as the rest of the last 24 minutes of the game with the clubs staying within two of each other for the first three minutes. George hit a lay-up and a free throw resulting from a James’ fifth foul to complete the three-point play and give the Pacers a three-point lead, 96:99 with just over two minutes on the board. Bosh countered the George three-point play with one of his own as he was fouled on a tip-in of a missed Battier triple, to draw Miami even at 99. West missed a jumper for the Pacers, giving Miami the ball with 31.6 to play. James split a pair of defenders and with Hibbert out of the game the Pacers’ best back-side help defender wasn’t there, giving him the open lane with just over 10 seconds to play giving the Heat a two-point lead, 101:99. After a loose-ball scrum at mid-court off a bad in-bounds pass, George got the ball and put up a three attempt. Wade committed his sixth foul on the play, putting him on the bench and George on the line for three shots. For the second time in the game, George hit clutch baskets, this time dropping in three straight singles to give the Pacers a one-point lead, 101:102, with 2.2 seconds remaining. Miami called a timeout to set a play and advance the ball to the front-court. The Heat ran a series of clear-out and diversion cuts with James playing a decoy as a pick, then a hard cut to the arc to get the ball. George got caught playing behind James, who got the ball and made a quick step past George on his way to the hoop, with no-one helping out (Hibbert was still watching from the bench), James had a clear path to the win as he released the ball just before the horn went off, giving the Heat Game 1, 103:102.

The Heat had five in double figures, while Indiana got 10+ from four.