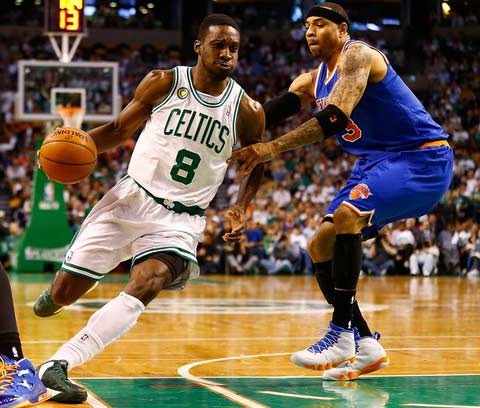 Ray Felton goes up between two Celtics in Game 4 in Boston.

With Sunday’s NBA Playoff games, the first two teams that will move on to the second round have been determined as the Miami Heat took care of the Milwaukee Bucks and the San Antonio Spurs swept the Lakers. In the other two games played, the Boston Celtics took the New York Knicks into overtime and kept their advancement hopes alive with a 97:90 win to bring their series to 3-1 in favor of the Knicks, and the Golden State Warriors improved their series with the Denver Nuggets to 3-1.

With a 77:88 win on Sunday, the Heat completed their sweep of the Bucks to advance to Round 2 of the NBA playoffs. The Heat will next face the winners of the Chicago Bulls – Brooklyn Nets series.

Miami opened the contest with a big first quarter, getting out to a 17:24 lead. The Bucks came back in the second and were able to pull to within two late in the frame, but ended up down four as they went to the break, 41:45. In the third the Bucks would get to within a point early in the quarter, but after the lead alternating between two and six, they settled for five, 62:67.

Ray Allen opened the final quarter with a jumper to extend the Heat’s lead to seven. Mike Dunleavy knocked down a triple for the Bucks and Monta Ellis hit a jumper to get Milwaukee back to down two, 67:69. Allen and Mario Chalmers hit back-to-back three-pointers to get the Heat back up eight and it was from there that the Bucks never recovered. Over the next five minutes the Heat continued to build their lead, with it peaking at 16. Over the last nearly three minutes the Heat wouldn’t score again while Dunleavy would score Milwaukee’s final five to bring the score to 77:88.

Four games, four wins, Spurs didn’t seem to even break a sweat… It was a good series for San Antonio, they didn’t have to work all that hard to get past the broken down Lakers, but they had to do their jobs and they did. On Sunday they completed the four game sweep of the Lakers and will now play the winner of the Golden State – Denver series.

“Obviously, it wasn’t a fair fight. When you’re a competitor, you want to compete even-Steven, and the Lakers weren’t able to do that.”
–Spurs coach Gregg Popovich

The Spurs controlled the game from the opening tip to the closing horn, with Danny Greens scoring a three-ball 25 seconds into the contest. The Lakers never were able to get out front with the Spurs leading 20:26 after one and 36:52 at the half. In the second half things tightened a bit, but there was no denying how the final outcome was going to be. San Antonio was up 58:78 after three and closed out the game at 82:103.

Tony Park was game-high for the Spurs with 23 points. DeJuan Blair and Kawhi Leonard each scored 13, and Gary Neal and Tim Duncan added 11.

Boston Celtics – New York Knicks, 97:90
Facing a four-game sweep, the Celtics came out with fire and desperation and even though it took them an extra five to get the job done, get the job done they did. They’ll return to New York for Game 5 on Wednesday.

The Celtics would build a 20-point lead in the second quarter before taking a 54:35 advantage into the halftime break. In the this game, New York’s go-to guy, Carmelo Anthony, was off from his game, shooting only 10 of 35 from the floor, but still hitting 16 of 20 from the line. No doubt most guys in the league wouldn’t mind scoring 36 on an off day…

The Knicks came out of the dressing rooms looking to put a cap on the series, but only had 24 minutes to turn around a 19-point deficit. Raymond Felton did what he could, tallying 16 of his 27 in the third quarter, which was two more than the entire Celtics team scored in the quarter. In the third 12 the Knicks outscored Boston 14:30, including a Felton three that left his hand before the frame-ending horn to bring the gap to 68:65.

The clubs battled in the fourth with Boston still up, until Iman Shumpert tied the score at 74. They exchanged a few baskets again, then Anthony hit a driving lay-up to knot the score at 82. Felton put them ahead with a jumper. Kevin Garnett tied the score yet again, but this time neither team could score over the last minute of the contest, sending the game in to overtime tied at 84.

Unlike Saturday’s Chicago-Brooklyn contest that lasted nearly four hours and included three overtime scores, the Celtics wanted this one over and outscored the Knicks 13:6 to get it done. In the OT period the first points were scored by Paul Pierce, then Garnett dropped in a jumper, but from there on out, Jason Terry took over and scored nine to lead the Celtics to first win of the series and another trip to New York.

Golden State Warriors – Denver Nuggets, 115:101
As Denver coach George Karl put it, “They found some magic and we’ve got to somehow take it away…”

The Golden State Warriors moved to within one game of knocking off No. 3 seed Denver, with a 115:101 victory in Oakland. The series will now move back to Denver on Tuesday for Game 5 and will return to Oracle Arena in Oakland on Thursday if necessary.

The Warriors outscored the Nuggets in every quarter except the last, with their biggest margin being 23-points with just over three minutes left in the game. From that point on Denver went on an 11:2 scoring run that cut the lead to 14 at the final buzzer.

Stephan Curry again paced Golden State, but was initially held back by his ankle injury he suffered in Game 2. It loosened up for him in the third, just in time for him to go on a 22-point scoring blitz. Curry ended the contest with 31, giving him 109 for the series (27.25ppg).

“I was considering shutting [Curry] down. I told him that. And it was almost like a boxer that knew he was on the ropes, because it was just a matter of time. . . . He captured the moment. He embraced the moment. It was almost like he had been waiting for this his entire career, and he wasn’t going to allow his body to tell him it was too hurt to match the moment.”
— Warriors coach Mark Jackson, on Curry

Getting the most love on the Jumbotron during the game was Warriors’ big man Andrew Bogut and his dunks. He won’t be winning any dunk contests any time soon as he doesn’t get style points, but the big fella can throw the rock down with authority with the best of them and he’s not afraid to run over anyone in his way. His five dunks got the nearly 20,000 friendlies packed into Oracle Arena on their feet, a lot.