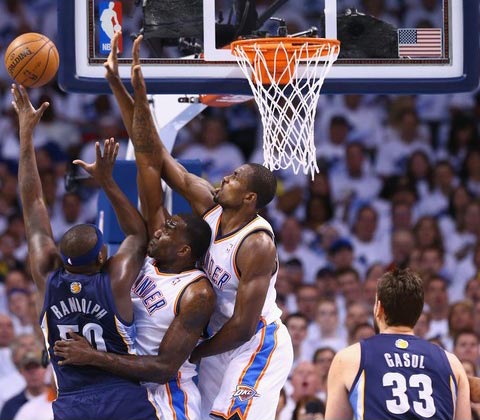 Both games scheduled in the NBA Conference semifinals were potentially elimination games, the Chicago Bulls were in Miami, down 3-1 and the Oklahoma City Thunder, also down 3-1, were hosting the Memphis Grizzlies. Both games started out with the series leader building big advantages, and both games ended with that lead disappearing and the games going down to the wire, but both Memphis and Miami did win and now wait for the results of the other two conference semis…

Miami Heat – Chicago Bulls, 94:91
Miami opened strong, let the Bulls back in the game and then played catch-up before finally getting on top in the fourth and holding off the scrappy Bulls to take their best-of-seven series 4-1 with a 94:91 win. The Bulls spent the series trying to deal with injuries and illnesses and had to replace Luol Deng and Kirk Hinrich, as well as former MVP Derrick Rose, who hasn’t played the entire season after knee surgery.

The Heat opened the contest with a 22:4 run, and the Bulls countered by outscoring Miami 8:17 through the rest of the quarter, to close out scoring with the Heat up 30:21. Carlos Boozer scored 12 in the first for the Bulls, LeBron James tallied 10 for the hosts.

Dwayne Wade regroups after slipping as he drove the baseline. Right after getting up he fired a bounce pass to Ray Allen that went through Chris Andersen’s legs. Allen missed the triple…

Chicago kept rolling in the second, going on a 4:12 run to pull to within a point, 33:34. Jimmy Butler dropped a three-ball to put the Bulls up for the first time in the contest at 36:38. After Chris Bosh hit a triple, which was his seventh straight point for the Heat, the Bulls hit four straight to get up by six, which was the lead they took into the half-time break, 47:53. Boozer finished the first half with 18 and Nate Robinson scored 14 for Chicago.

The clubs exchanged baskets for the better part of the third frame, but with just under four minutes to play in quarter the Bulls got a free throw from Joakim Noah, layup from Boozer and a triple from Richard Hamilton to get up by 10, 63:73. Shortly after, Robinson connected on a pair of singles to get their largest lead at 11, 64:75. Ray Allen hit a three-pointer and Chris Anderson dropped in a layup to cut the lead to eight, 69:77, to close out the third 12.

To open the fourth, Shane Battier knocked down a triple and Andersen was on the receiving end of a Norris Cole alley oop that cut the lead to three. Cole hit a jumper and then a dunk mid-way through the final 12 to put Miami back on top 84:83. Dwayne Wade hit two jumpers to give the Heat a four-point advantage with just under five minutes to play. Robinson cut the Heat’s lead to three with a lay-up, but James sank a pair of free throws and Wade came out of nowhere to slam an offensive rebound off a missed jumper from Cole, giving Miami a seven-point lead, 93:86. Boozer got his 26th point in the paint and Robinson knocked down a triple to cut the gap to three, 94:91, with less than two minutes to play. The last minute and a half wasn’t a clinic on fundamental basketball as Bosch lost the ball to Boozer, who went down and missed a jumper. Battier missed a three-pointer, which was followed-up by a James missed jumper. In the final 15 seconds Chicago got three shots to tie things up as Robinson missed a triple, which was rebounded by Boozer and kicked to Butler, who missed, then Robinson got that rebound and kicked it to Butler again but the shot was after the horn, giving the Bulls the win and the series.

It is sort of the story of the season. I told these guys this yesterday. Obviously, we’re disappointed in losing the series, but I was never disappointed in the team. I thought our team fought hard all year long.”
–Bulls coach Tom Thibodeau

Boozer was game-high for the Bulls with 26 points and 14 rebounds. Robinson added 21 points and 6 assists, Butler scored 19, and Hamilton accounted for 15 points.

The Heat will now face the winners of the Knicks-Pacers series. With the Pacers up 3-1, the series returns to New York for Game 5 on Thursday.

Oklahoma City Thunder – Memphis Grizzlies, 84:88
The Oklahoma City Thunder couldn’t figure out how to stop Grizzlies’ big man Zach Randolph as he led Memphis to an 84:88 win and a spot in the Conference finals with 28 points and 14 rebounds. Kevin Durant had his worse shoot day of the year from the floor only making 5 of 21, including missing a jumper that would have potentially sent the contest into an extra frame.

Every game had a chance to go to the other team. Tonight they came back in the second half and just kept coming and coming, we just made enough plays to win. Zach was huge the whole game, he came out snortin’ and gruntin’ the whole game.
— Grizzlies coach Lionel Hollins

The Thunder scored the first seven points of the contest, but Memphis tied things up at 11, mid-way through the frame. Durant hit a jumper, Serge Ibaka and Kevin Martin threw down dunks to close out the first frame with OKC up 23:18.

The Grizzlies went on a 1:11 run to open the second and get up 24:29. Starting mid-way through the quarter Memphis had their second run, this one was 3:14, giving the Grizzlies a 38:50 advantage heading into the mid-game break.

The clubs exchanged baskets for the first couple of minutes of the third, but after Randolph hit a jumper for his 18th point and Tayshaun Prince threw down a dunk, Memphis held a 14-point lead, 46:60. Durant hit four and Derek Fisher knocked down a three-ball for the Thunder to cut the margin to seven, 53:60. To close out the quarter, the Thunder outscored Memphis 9:4 to pull to within a deuce, 62:64, heading into the final frame.

Memphis opened the fourth with a 2:12 run to get up 64:76 at the half-way point. Reggie Jackson and Marc Gasol traded baskets then Ibaka sandwiched a Fisher long-ball with dunks to cut the margin to five, 75:80. Nick Collison tallied four in the paint after a Tony Allen three-point play to reduce the margin to four, 79:83, with 49.3 seconds to play. Gasol threw up a shot that looked high enough to come close to the rafters to extend the lead back to six. Martin hit a pair of freebies, then Randolph split a pair to give the Grizzlies a five-point lead. Jackson nailed a three-ball with 14.3 to cut the gap to two, 84:86. Randolph missed a pair of free throws with 11.3 seconds to play, setting up a potential last-second shot for the Thunder. As the ball came in, they got it to Durant who took two dribbles in and took an open jumper to tie the score, but was long giving the Grizzlies the win and the series.

We came up short, Memphis made it tough on us all series. That last play I was just trying to get an open look and I had one, but my shot was too long. It’s tough to lose your last game in the playoffs and down the road we’ll probably look back on this and appreciate these tough times. Sometimes you gotta ride out the storms to get to the sunshine.
— Kevin Durant

Randolph was game-high with a 28P/14R double/double for the Grizzlies. Mike Conley added 13 points and 11 assists, Allen scored 11, and Gasol contributed 10 points and 7 rebounds.

Memphis will take on the winner of the San Antonio – Golden State series.