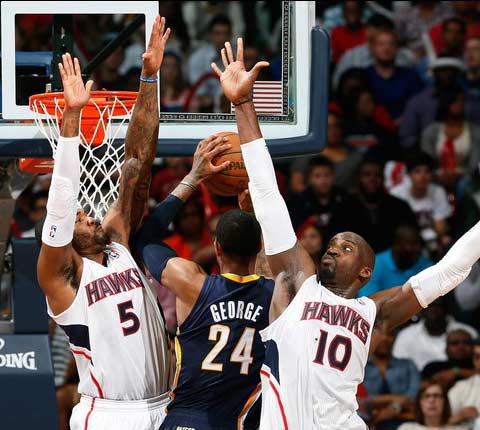 Oklahoma City’s Serge Ibaka reacts to missing a chip shot that would have sent the Thunder and the Rockets into overtime.

The NBA Playoffs will continue on a bit longer thanks to big wins on Monday night. In Houston, the Rockets held off being swept in four by the Thunder; In Atlanta they knotted up the series at 2-2; in Brooklyn the Nets pulled to within a game, while also fighting off elimination…

Houston Rockets – Oklahoma City Thunder, 105:103
Houston’s Chandler Parsons had 27 points, 10 rebounds, and 8 assists to lead the Rockets to a Game 4 win that came down to a missed five footer and a blown put-back 2 footer…

We were in this situation the last two games. There was no way that we were going to give this one up. … The pain and frustration from those last two losses, we didn’t want that feeling again. We weren’t going to let our season end with that happening for the third straight time.
— Rockets’ Chandler Parsons

OKC’s Kevin Durant played a point-forward hybrid role for the second night as the Thunder look for a way to replace the injured Russell Westbrook. In Game 3 Durant launched 30 shots trying to fill in for Westbrook, in Game 4 he settled into his new role better, putting up 38 points, while grabbing 8 rebounds, and dishing off 6 assists.

Houston took the lead after the first 29:24, but the Thunder rolled in the second outscoring their hosts 24:36 to head into the intermission up 53:60.

As Parsons stated, the Rockets were determine to not let the same thing happen to them three nights in a row and they came out from the break with what seemed to be a plan to “take it to them…” They scored the first 10, all on either dunks or lay-ups, to take the lead 63:60 before Durant hit the Thunder’s first points of the half. By the time the third quarter was in the books the Rockets were up 91:84 off a 38:24 quarter of scoring.

Mid-way through the final 12 OKC had a 1:8 scoring run that pulled them to within two, 100:98, with five minutes to play. Houston countered with five unanswered to extend back to seven, but Durant hit triple and got his 38th point on a dunk to come to within two again, with just over a minute to play. Durant was whistled on a charge as he ran over Patrick Beverley on his way to the hoop with 35.9 seconds left looking to tie the score. After Harden missed a jumper, Reggie Jackson missed a driving off-balance five-footer, Serge Ibaka got the rebound and was all alone for a two-footer that he hit the rim with, giving the Rockets the 105:103 win to pick up their first win of the series. OKC leads the series 3-1, Game 5 will be played Wednesday in Oklahoma City.

Parsons led the Rockets with 27 points, 10 rebounds, and 8 assists, Omer Asik contributed 17 points and 14 rebounds, Beverley dropped in 16. James Harden scored 15 in what was an off-day on the floor, shooting only 33% (4 of 12) inside the arc and missed all four of his triple attempts, He connected on 7 of 8 free throws on the night. Carlos Defino added 13.

Brooklyn Nets – Chicago Bulls, 110:91
The Bulls were looking to close their series with the Nets out in Game 5, but the Nets really wanted to pick up their second win in the series to head back to Chicago for a Game 6. Getting 28 points from Brook Lopez and using a 33:18 fourth quarter, the Nets got that second win to stay alive in their best-of-seven series with the Bulls.

I don’t really have a social life. I like hanging out with the guys here. So I definitely didn’t want the season to end.
— Nets center Brook Lopez on his motivation

Chicago was without the services of start guard Kirk Hinrich, who injured his calf muscle in Game 4. Hinrich averaged 11 points and 5 assists per game in the first four games.

A key stat was Brooklyn outrebounding the Bulls 44-33, including holding Joakim Noah to just four total, he’s averaged over nine per game in the first four games.

Proving that his performance in Game 4 was no fluke, Nate Robinson led the Bulls with 20 as he stepped in to a starting role with Hinrich sitting in street clothes.

The contest was tight for three quarters with the Nets taking the early lead, getting up 52:44 at the half. The Bulls cut the margin in the third, outscoring Brooklyn 25:29, to set up the fourth with the score at 77:73 in the Nets’ favor.

In the fourth Brooklyn kept the Bulls at arms length, letting them get to within a point for a few seconds before extending back to five. The game broke open late in the frame when Gerald Wallace hit the cords with a three-ball, then stole a bad pass from Robinson and ended the sequence with a big dunk. Chicago wouldn’t find the net for what ended up being nearly four minutes, while the Nets put down 12 to pick up the 19-point win, extending the season by at least one more game.

Game 6 will return to Chicago on Thursday.

Lopez led the way with a 28 point, 10 rebound double/double for the Nets. Deron Williams added his own double/double with 23 points and 10 assists. Andray Blatche added 13 points, Wallace dropped in 12, Joe Johnson and C.J. Watson picked up 11 each.

Josh Smith gets the Hawks and the crowd fired-up…

The Atlanta Hawks enjoyed their second day of home cooked meals and put up their second ‘W’ in the Phillips Arena to even things out with the Pacers at two games each. Game 5 will be played on Wednesday back in Indianapolis, while Game 6 will return to Atlanta.

Atlanta was led by Josh Smith, who put down 29 points and hauled in 11 rebounds. The point total was a playoff career high for Smith.

The Hawks game out strong, building a huge 17-point lead at the half, 57:40. In the third the Pacers used a 1:15 run that got them back to within four, 65:61. Atlanta scored the next four, then Ian Mahinmi closed out the scoring with a charity toss for Indiana to bring the score to 69:62 heading to the final 12.

In the fourth the closest the Pacers would get would be 92:87 with just under two minutes to play, giving Atlanta their second win of the series.