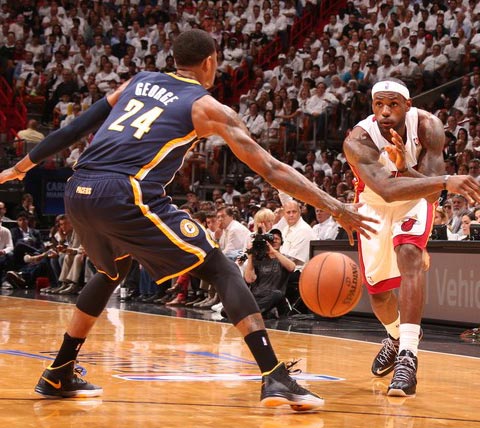 Chris “Birdman” Andersen (l) and Tyler Hansbrough not so calmly discuss the flagrant foul Andersen was called on in Game 5. The two received technicals for the exchange.

The Miami Heat used a huge third quarter over the Indiana Pacers to move ahead 3-2 in the best-of-seven series in the NBA Eastern Conference Finals with a 90:79 victory at American Airlines Arena in Miami on Thursday. LeBron James led the Heat with 30 points, including 16 in the third 12. Paul George has been battling with James throughout the Finals and countered with 27 Thursday. Chris Andersen improved to 15 for 15 from the floor in the playoffs.

Game 6 will shift back to Indianapolis on Saturday, the Heat will look to close the series out, the Pacers will be hoping to book return flights to Miami for Game 7.

[James] was pretty special tonight. There’s no question about it. This whole team is special. They’re one of the best teams this league has ever seen. We’re enjoying competing against them.
–Pacers coach Frank Vogel

The way this contest started it looked like it was going to be a very low scoring affair with the first three minutes going nearly scoreless with multiple turnovers and missed jumpers. Roy Hibbert got the first points on a tip-in of a missed David West runner, then James got his first points on a jumper. The clubs got things rolling with George and Hibbert scoring all 23 of the Pacers’ first quarter points (George 13, Hibbert 10), helping them to build a 19:23 lead.

Scoring in the second started fast, with both clubs dropping in jumpers each time down the court over the first few minutes. Hibbert put in four more in the paint and George got another jumper, giving the duo all 29 of Indiana’s 25:29 lead. Tyler Hansbrough got the first points for the Pacers that didn’t come off the hands of George or Hibbert, splitting a pair of singles after Andersen was whistled for a flagrant foul on Hansbrough, prompting a heated discussion between the two and giving the officials reason to tack on technicals to both. Near the end of the half Chris Bosh knocked down a triple and followed it up with a layup, then a James jumper knotted the score at 40 with just under two minutes on the clock. West hit consecutive jumpers for the Pacers to give them a four-point lead, 44:40, heading into the break.

Hibbert got the new half started with a dunk, then the Heat ran off seven straight to get the lead 47:46 for the first time since they held a 2:4 advantage early on. With just over five minutes to play in the third, James hit a jumper, Mario Chalmers dropped in a three-ball and then James hit a pull-up jumper to build their biggest lead of the game at five, 58:53. After a pair of West singles, the Heat got a long-ball from James and then three jumpers from Udonis Haslem, to get a double-digit lead at 67:55 inside a minute left in the frame. Ian Mahinmi and West both split a pair of free throws and James hit a three-pointer to close out the 30:13 quarter, giving the hosts a 70:57 advantage after 36 minutes of play.

George got his 20th point with a triple early in the final frame and Hansbrough sank a layup to pull the Pacers to within eight, 70:62. Ray Allen connected on a pair of free throws, followed-up by jumper from George. Norris Cole dropped in a layup and Hibbert hit a hook off the box, keeping Indiana within eight. Allen hit the cords with a triple and Dwyane Wade dropped a layup, pushing the margin back to 13, 79:66, with eight minutes on the clock. Indiana wouldn’t get their deficit under double digits again and the Heat picked up their third win of the series with an 11-point win.

Well, that’s playoff competition at its best. The second half we played much more aggressively and committed to our identity and was able to take that through to the end. We’ve already talked about leaving that behind. This is a so highly competitive series. Now we have to get ready for Game 6.
–Heat coach Erik Spoelstra

James tallied a game-high 30 points, 8 rebounds, and 6 assists for Miami. Haslem shot 8 of 9 for 16 points, Chalmers scored 12 and dished off 6 assists, Wade added 10 points and 6 rebounds.

George led the Pacers with a 27P/11R double/double. Hibbert added 22 points and 6 rebounds, and West contributed 17 points and 8 rebounds.