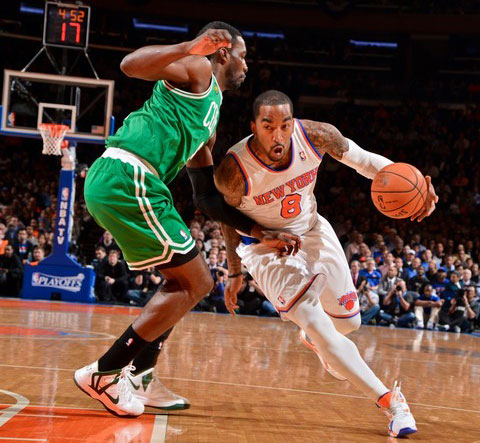 OKC’s Reggie Jackson looses the handle on the ball as Houston’s Chandler Parsons (l, #25) and Omer Asik (r, #3) look on.

They planned for a ‘funeral’ in New York, but the Celtics informed everyone that reports of their death had been greatly exaggerated… A group of Knicks’ players made the decision to wear black to the arena Wednesday night because it was going to be the Celtics’ funeral, but Boston had different plans and forced a Game 6 with an 86:92 win in New York, who now leads 3-2. Indiana also improved to a 3-2 lead over the Atlanta Hawks with a 106:83 rout in Indianapolis, and Houston forced Game 6 behind 31 from James Harden, who hit his first seven triples, coming two shy of the NBA record for most three-point field goals in a post-season game.

New York Knick – Boston Celtics, 86:92
Carmelo Anthony had averaged 32 points per game for the first four games of the Knicks best-of-seven series with the Boston Celtics, but was held to 22 shooting only 8 of 24 (0 of 5 from behind the arc). J.R. Smith, part of the pack of ‘funeral goers’, stated that had he not been suspended for Game 4, the Knicks would have already wrapped up the series, was 3 of 14 on the night. It just wasn’t New York’s night and now they’ll catch a shuttle and head back to Boston for Game 6 on Friday.

The Celtics, knowing the each game could be their last, are focusing on taking one game at a time as there is to tomorrow if they lose.

[The pressure] is on us still and them maybe but it’s definitely on us still. It’s another Game 7 for us. Every game since we’ve been down 3-0 has been Game 7 for us and that’s the way we’ve been viewing it instead of thinking of it as a 3-0 game. You want to win the Game 7’s and we’re looking at each one of these as Game 7’s, so it’s still a ton of pressure on us. We’re playing a really good basketball team and we know that.
— Celtics coach Doc Rivers

The Knicks took the lead after the first, getting up 22:20, but Boston put a plus eight up for themselves in the second, outscoring New York 25:17 to take a 39:45 lead into the break.

The Celtics added three to their advantage in the third, going 24:21, to head into the final frame up 60:69. New York was able to pull to within five on two occasions during the last 12, but couldn’t get any closer, giving the Celtics their second game in the series and setting up Game 6 on Friday.

Jeff Green was high-man for Boston with 18 points, Brandon Bass and Jason Terry each added 17 points, Paul Pierce dropped in 16, as did Kevin Garnett, who also dominated the boards with 18 total rebounds.

Another big scoring run in the third put the contest away, with Indiana building a 20-point lead on an 18:5 run and cruising in for the win. The Hawks will host Game 6 on Friday.

We had to go out and earn this win and in order to do that, we had to maintain our composure throughout the game and we did not do that. We also had to play smart, and we didn’t do that, either. One compounded the other and we got into kind of a me-me-me state.
— Hawks Coach Larry Drew

Oklahoma City Thunder – Houston Rockets, 100:107
Houston is another club that has seen the white light, but has pulled through to see another game. This time though, it would seem that the Rockets have things falling into place for them, while the Thunder are trying to figure out how to best handle losing All-Star playmaker, Russell Westbrook. With the win on Thursday, the Rockets have earned another home game in the series that is now 3-2 in favor of OKC.

Well the good news is we’re up 3-2. They’ve won the last two games and we won the first three. It wasn’t the way we wanted to start the game but they played lights out. We have to be able to match up in transition we have to do a better job of that.
— Thunder coach Scott Brooks

In this contest, the Rockets spent the first three quarters building a lead that would peak at 16-points, only to have the Thunder be able to pull to within five late in the fourth.

Mid-way through the fourth quarter Thunder coach Scott Brooks turned to a strategy of fouling Houston big-man Omer Asik early in a possession to send him to the free throw line. As the Rockets would in-bound the ball, one of the OKC five would wrap him up for a foul. Asik, and import from Turkey who former played for Fenerbahce, has shot 52.7% from the line over his three year career in the NBA, so the idea had merit, but Asik ended up going 13 of 18 from the line on Thursday.

He did a great job hitting his free throws, Scotty went with the, what would that be called ‘hack-a-Turk’ and he [Asik] was great. With this group they fight, they’re battlers. I’m really proud of these guys.
— Rockets coach Kevin McHale

The Thunder was able to take advantage of a few of Asik’s misses, but every time they cut the deficit to under 10 points, the Thunder would drop in a few of their own to pull away again.

Game 6 will be played in Houston on Friday.

Kevin Durant was game-high with 36, including 18 in the third quarter. He also added 7 rebounds, and 7 assists. Reggie Jackson has stepped into the starting lineup with Westbrook out for the remainder of the season and scored 20 on Thursday. Serge Ibaka dropped in 14, while grabbing 20 rebounds.