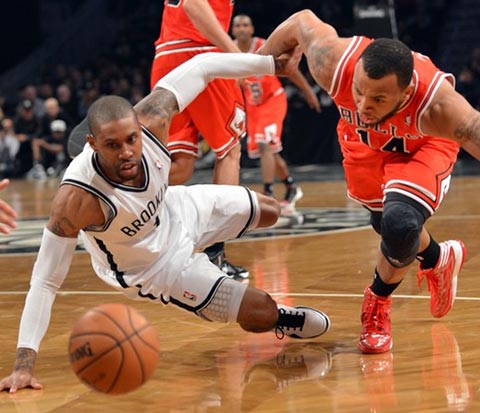 Round 2 of the NBA Playoffs start on Sunday, but before those games can start, they needed to establish which club, Chicago or Brooklyn, would square off against the Miami Heat in the next round. The Bulls traveled to Brooklyn to do just that and despite being a totally different team than Chicago is capable of starting due to injuries and illness, the Bulls used a huge second quarter and held off a rally by the Nets to close out their best-of-seven series at 4-3 with a 93:99 victory at the Barclays Center.

Brooklyn Nets – Chicago Bulls, 93:99
At this point of the season, many teams are discussing their line-ups with awards added to their players’ listings. Whether the player is an All-Star, Rookie-of-the-Year Candidate, 15-year veteran, etc., the extra information becomes good material to filter into conversations and stories…

For the Bulls, they are happy to not be using such terms as former equipment manager and Junior Varsity back-up center…

As the clubs took to the hard court, Chicago was down three key players, All-Star and former league MVP, Derrick Rose, who’s been out for the entire year with an ACL tear. Luol Deng, 7-foot center, missed another game after spending time in a Chicago hospital on Friday with complications from a spinal tap. Kirk Hinrich, who’s been battling a severely bruised calf muscle, tried to go through warm-ups in hopes of things feeling well enough for him to do what he could for the club. On top of those three, all of whom couldn’t suit up, the Bulls also had back-up point guard Nate Robinson recovering from flu-like symptoms and was reportedly throwing up into a garbage can during timeouts of Game 6 on Friday, and Taj Gibson also dealing with flu-like symptoms.

In the end, it was Joakim Noah that guided the Bulls to the win with 24 points and 14 rebounds.

The Bulls got the early lead, taking a four-point advantage, 25:29, into the second frame behind 10-points by Noah, while the Nets got nine from Deron Williams.

Mid-way through the second frame the Bulls ran off nine unanswered to extend the four-point lead from the first quarter into 13 points, 38:51. After Andray Blatche hit a jumper for the hosts, the Bulls got six more to get up by 17, which is where things sat when the horn sounded sending the clubs to the lockerroom at the intermission.

Brooklyn got a quick five from a Brook Lopez jumper and then a Williams triple. With eight minutes to play, Gerald Wallace would hit a three-ball and then get the ball back 20 seconds later after a bad pass from Noah, connecting on a second three-ball to cut the margin to seven, 60:67. Two dunks and a split pair of free throws around the six-minute mark would further slice into the margin, which had been cut to four, 65:69. Noah scored Chicago’s last six points of the quarter, to build the lead back up to seven, 75:82, heading into the final 12. Wallace would account for 11 for the Nets during the third.

In the fourth, the best the Nets would be able to do is get to within five, 81:86, off a Williams three-ball, while reserve guard Marco Belinelli was able to push the Bulls’ lead to 10 with a triple of his own. With two and a half minutes to play Williams drove the lane and was fouled. After his layup dropped through the hoop and he converted the old-time three-point-play by adding the free throw, the Nets were within five again, 88:93. Belinelli connected on a lay-up on the Bulls’ next possession and then four straight free throws to close out the scoring for the Nets, up 93:99, which was good enough to pick up win four of the best-of-seven series.

Both Noah and Belinelli dropped in 24 for the Bulls, while Noah also grabbed 14 rebounds for his double/double. Boozer added 17 points and 7 rebounds, and Robinson contributed 12 points and 4 assists.

Williams scored 24, grabbed 6 rebounds and dished off 7 assists for the Nets. Lopez added 21 points and 9 rebounds, and Wallace scored 19.

The next stop for the Bulls will be Miami on Monday to open up the Eastern Conference semis.