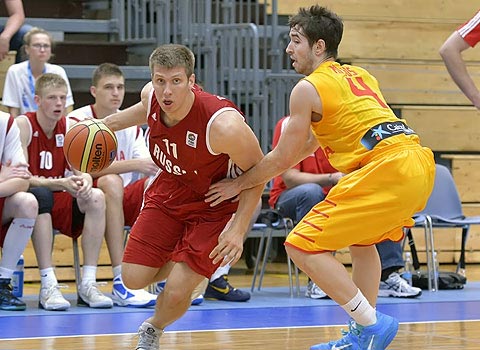 Montenegro’s Marko Mugosa heads to the hole on his way to a first day high 30.

Fans of the Men U20 European Championships were treated to just about every type of contest on the opening day of the 2013 tournament with come-from-behind wins, blowouts, upsets, and a buzzer-beater to fill the schedule.

In Group A, Germany opened the event with a 14-point win over Georgia and U20 defending champions Lithuania bridged an eight-point half-time deficit to defeat Serbia 68:64.

Turkey’s Ahmet Tuncer dropped a jumper with five clicks left on the clock to give his club a 74:73 win over Croatia in the opening match in Group B and Montenegro put up 25 on the Ukrainians, 83:58.

Group C opened with two routs as the Russia contingent was handed a 22-point loss at the hands of the club from Spain, and Latvia opened their 2013 European Championships with a solid 87:59 win over Israel.

France blew a 13-point second quarter lead to Italy and found themselves on the short end of a 76:70 score, while the 2012 U20 host nation Slovenia got their tournament off on the right foot by handling 2013 host club Estonia, 79:69.

The Germans used a 16:0 run in the first quarter to put their contest with Georgia away early, getting up 22:5. Georgia did run off 10 straight to cut the gap, but they never got closer than eight. At the end of the first half Germany went on a 10:0 run of their own to take an 18-point lead into the mid-game break, 47:29. Georgia pulled to within 13 part-way through the third 10, but by the end of the quarter the Germans had stretched the lead back to 19, 70:51. In the fourth the gap came down again, this time to 12, but the Germans kept the distance and picked up their first win in the group, 89:75.

Germany was led by Bodgan Radosavljevic, who was game-high with 25 points, Hans-George Brase added 16, and Kenneth Ogbe dropped in 15. Georgia got 19 from Irakli Mikeladze.

Lithuania – Serbia, 68:64
Serbia built a 35:27 lead at half-time, only to get outscored in the second half and fall 68:64 in their opening game in Group A. Serbia put on a shooting exhibition in the first half, dropping close to 70% from the floor, as opposed to 34.8% for Lithuania). Coming off the half-time break the Serbians extended to a 12-point advantage, but the Lithuanians shifted defenses to protect the inside and went on a 16:2 run to get their first lead of the contest at 43:41. They kept the pressure on and built a nine-point lead before Serbia got fired up and put together a run of their own, cutting the lead to a point, 59:58 with just under three minutes to play. Lithuania controlled the end of the contest, pulling away to pick up their first win of the tournament. Valdas Kariniauskas was top-man in the game with 23 for Lithuania and was helped by Laimonas Chatkevicius’ 13. Luka Mitrovic put up a 20P/10R double-double to lead the Serbians.

Group B
Turkey – Croatia, 74:73
Turkey got a jumper with five seconds to play from Ahmet Tuncer to grab win number one from Croatia, 74:73. Turkey held the lead for the better part of the contest, but the final minutes made it a thriller as the lead shifted six times in the last five minutes. For every move Turkey made during the contest the Croatians had an answer. With 11 seconds remaining, Croatia grabbed the lead off an offensive rebound put-back from Henrik Sirko, only to have the Turks draw up a set for Tuncer who knocked down the game-winner. Berkay Candan paced Turkey with 17, Erbil Eroglu added 14, and Tuncer contributed 11. Croatia got a game-high 20 from Matej Buovac, including 5 of 7 from long-range.

Montenegro – Ukraine, 83:58
Montenegro got a day one high of 30 points from Marko Mugosa on their way to a huge first win over Ukraine, 83:58. The Montenegro squad took the ball to the paint early and often getting 27 from their bigs, Mugosa and Vukota Pavic, in building a 40:31 advantage at the break. The Ukrainians had their opportunities, but choose to live outside the arc and committed numerous early turnovers. In the third Montenegro extended their lead to 56:35 and cruise to the day one win. Contributing to Mugosa’s 30 for Montenegro was Pavic’s 22. Klym Artamonov, Oleksandr Furs and Sergly Zagreba each dropped in 10 for the Ukraine.

Group C
Spain – Russia, 76:54
Spain opened their first round match with Russia by getting up 27:15 at the end of the first frame. Russia cut the gap by five at the half, but Spain controlled the second half, outscoring their opponents 39:24 to take game one in Group C by 22, 76:54. Daniel Diez led the way for Spain with 23 points and 7 rebounds. Jaime Fernandez added 14 points and 8 rebounds to the winning cause. Aleksandr Gudumak was team-high for Russia, scoring 15, while Artem Komolov added 11.

Latvia – Israel, 87:59
Israel jumped out to the early lead, getting up 15:6 early in the first, but Latvia ended up putting up 18 on the Israelis in Game 1 of their Group C round, 87:59. After Israel built their early lead, the Latvians ran off 14 unanswered to take the lead. Another 12:2 run to start the third gave them a 15-point advantage, 53:38 mid-way through the third 10. Israel was able to pull to within 10 at 53:43, but from their on out it was all Latvia as they ran away with win number one in their four-game opening round, 87:59. Ingus Jakovics was game-high for Latvia with 26, Kaspars Vecvagars added 17 and Janis Berzins dropped 15. Tom Maayan scored 14 to lead Israel.

Group D
Italy – France, 76:70
Italy had their backs against the wall early in the second quarter having fallen behind France by 13, only to rally and pull off a 76:70 upset over the much bigger French club. Livio Jean-Charles picked up 10 of his 14 points in the first quarter, helping his club stretch out their lead to 13, only to have the Italians fight back to within two a few minutes later. France took a six-point lead into the mid-game break, then extended that to nine as the third quarter opened. Italy turned up the defensive pressure and found their range from behind the arc, knotting the score at 47 mid-way through the third. The Italians took the lead and they clubs ended the third tied at 54. Italy opened the final frame with a free throw, giving them a lead that they wouldn’t give up through the entire final 10, slowly building their six-point advantage that they ended the contest with at 76:70. Marco Lagana was game-high for Italy with 16, Awudu Abass added 13, and a pair of Matteos, Imbro and Chillo, added 11 points apiece in the win. Hugo Invernizzi and Mouhammadou Jaiteh dropped in 15 points each for France.

Slovenia – Estonia, 79:69
In the final match-up of the day, the host club, Estonia, got out to an early lead, then was outscored in each of the last three quarters, picking up their first loss as Slovenia came out on the high side of a 79:69 score. Estonia got up by as much as 10, 22:12, in the first quarter, but settled for a 25:20 advantage at the end of the first 10. Slovenia hit their stride in the second, outscoring their hosts 27:20 to take a 47:45 lead into the break, capped off with an off-balance triple at the buzzer by Slovenia’s Domen Bratoz. The Slovenians took control in the third, running out to an 11-point margin mid-way through the quarter. By the end of the third Estonia had pulled to within four, 64:60. Slovenia held the hosts to nine in the final frame, while putting up 15 to take Game 1 of their first round, 79:69. Miha Lapornik was high-game with 21 points and 8 rebounds for Slovenia, Gregor Hrovat added 17, and Matej Rojc dropped in 12. Estonia was led by Martin Paasoja and Rait-Rilvo Laane’s 12 points each.