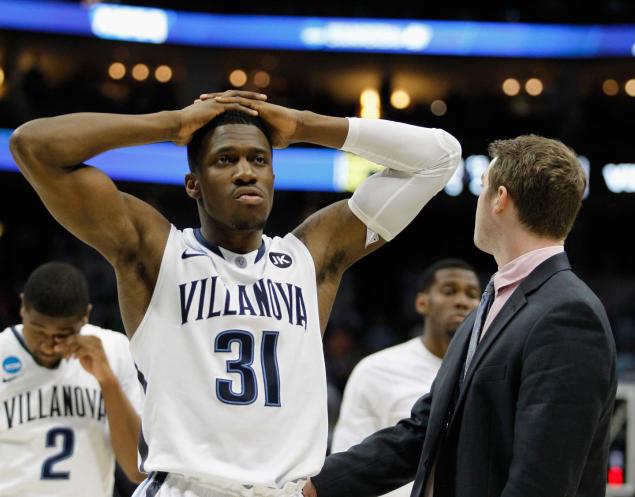 March Madness, who made Sweet 16?

March Madness continued on Saturday and threw up the typical array of interesting facts, while posing a number of questions as the tournament progresses. We saw the first Number 1 seed fall as Villanova came up short against North Carolina State, but the Kentucky Wildcats continued their unbeaten season with a win over Cincinnati.

UCLA scored well on a way to its win over UAB to progress to the Sweet 16, great news for the school that is confounding the numerous critics who said they should not have been in the March Madness tournament.

There were several other games on the night that saw Utah, Notre Dame, Arizona, North Carolina, and Xavier all collect wins.

Villanova became the first number one seed to leave the Big Dance as the school fell to North Carolina State, who looked strong in attack to make the Sweet 16. Villanova’s 16 game winning streak was snapped as N.C. State put together a courageous attacking display. The eighth seed was certainly expected to loss to Villanova, but the Wolfpack looked in control before having to suffer a rally from Villanova, paced by Darrun Hilliard who finished with a game high 27 points. Trevor Lacey led the winners with 17 points and 6 rebounds, topping a team effort from N.C. State that will leave Villanova pondering another Week 1 exit.

Xavier looked to its bench as it overcame Georgia State to progress to the Sweet 16 where it will match up with number 2 seed Arizona. Jalen Reynolds and Myles Davis came from the bench to hit 38 points for the sixth seed Musketeers. There was also a talking point on the Georgia bench as head coach Ron Hunter was using a rolling chair thanks to a pre March Madness Achilles problem. Xavier shot 81% in the second half to pull away from their opponents as Reynold’s 21 points were pivotal down the stretch.

North Carolina is in the Sweet 16 for the first time in three years thanks to a victory over Arkansas during week 1 of the Big Dance. Marcus Paige was instrumental in the win as he plundered 20 second half points on his way to 22 overhaul. It was certainly a game of two halves for Paige as he missed 7 from 8 attempts through the opening 20 minutes, before he turned game winner in the third and fourth quarters. Michael Qualls kept Arkansas in the game with a double-double of 27 points and 10 rebounds.

Number 2 seed Arizona breezed past 10th seed Ohio State to reach Sweet 16 for the third consecutive year. The Wildcats found holes in Ohio’s zonal defence to strike from the field with regularity once they had settled into the game after a slow start. The Pac-12 champs looked comfortable throughout, but made it easy down the straight by opening a 15 point lead midway through the fourth quarter. T.J. McConnell offered 19 points, 6 rebounds, and 6 assists in the winning effort.

A tight clash saw Notre Dame edge past Butler, a win that sent the third seed school to the Sweet 16 for the first time since way back in 2003. Irish are the ACC tournament champs, so are used to games getting tight and riding it out. Jerian Grant was the go to guy for the winners as he scored 16 points, including a layup with 18 seconds to go that confirmed the win. Notre Dame was not exactly impressive seeing off the Bulldogs, but The Irish certainly know how to win ugly.

For those who thought Kentucky’s march to the NCAA championship would be a procession, here is some food for thought. Yes, the Wildcats did win by double digits and progressed to Sweet 16, but Cincinnati troubled the all-conquering undefeated school. Indeed, Cincinnati worked Kentucky at both ends of the floor, and certainly pointed to a way the Wildcats may be defeated. The lesson here is, while Kentucky grabbed its sixth consecutive double digit win, they may be looking a little less unbeatable this morning.

UCLA drained the most points on Saturday as the school proved the doubters wrong with a big win over UAB. Some have claimed that 11th seed UCLA should not even be involved in March Madness, but this game flew in the face of that opinion as the Bruins claimed a second straight Sweet 16 berth. UCLA has won its last seven games and is turning into form at just the right time.

After a ten year absence, Utah is making its way back to the Sweet 16 after overcoming Georgetown. The Utes picked up the fifth seed and downed fourth seed Georgetown with some solid post play, just like the team displayed in its first tournament game. Brandon Taylor led the scoring for the winning effort with 14 points, followed by Delon Wright with 12 points.