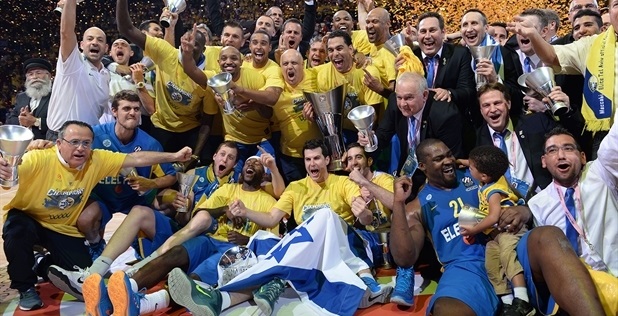 The Euroleague trophy will be returning to Israel as Maccabi Electra Tel Aviv capped a wonderful Final Four weekend with one of the most memorable Euroleague Final wins in history. The club overcame Spanish powerhouse Real Madrid 98-86 in the first final game to go to overtime in 45 years. In many ways 5 time winner of the competition, Maccabi Electra, came into the Final Four as the unfancied underdog, but the Israelis lived up to history to record surprise wins over hot favourites CSKA Moscow and Real Madrid.

Maccabi recovered from a losing first half to force overtime in the last stanza, before outscoring Los Blancos in the extra frame. It was Tel Aviv’s fifth Euroleague success overall and its first since the back to back titles of 2004 and 2005. The clubs’ Final Four triumph will come as a surprise to some as the Israeli giant has had a stop start Euroleague campaign. However, the tag of underdog suited the players in the yellow jersey and Maccabi Tel Aviv performed when it mattered.

As for Real Madrid, a season that promised so much on the continent ended in the most heart-breaking of fashions. The Spanish team has been arguably the best in Europe this season, so the players and fans will feel the hurt of this defeat even more. Los Blancos will look for scant consolation in the fact next year’s Final Four will be held in Madrid, the perfect location to set the record straight and win a first Euroleague in nearly 20 years.

First quarter
Rudy Fernandez notched the first basket of the night to give Real Madrid an early lead from beyond the arc, before he then replied to a Sofoklis Schortsanitis two for a 5-2 lead. Madrid looked good in the D with Ioannis Bourousis grabbing three blocks in one minute. However, Maccabi Tel Aviv was also in an early defensive groove and the Israeli’s shut out Los Blancos for four minutes through the middle of the first quarter. During that time Schortsanitis, Yogev Ohayon and Devin Smith all scored to give Maccabi a 5-8 cushion. Madrid retook the lead as Rudy nailed another from downtown and Felipe Reyes scored 4 unanswered as the Spanish club held on to hold a narrow 16-15 lead at the end of the first.

Second quarter
Fernandez was on fire and he opened the second quarter as he had the first, this time with a monstrous dunk that rumbled the arena. Sergio Rodriguez nailed a triple and suddenly Madrid held a six point lead, with the scoreboard reading 21-15. A timeout called by Tel Aviv did little to stem the Madrid tide as Reyes hit a two, Rodriguez hit from the charity strip, and Marcus Slaughter slammed from an alley-oop pass to make it 26-15. The Spaniards had put together a 10-0 and 19-2 run to look formidable in the game, but David Blu and Tyrece Rice scored for Maccabi to keep them in touch, before Jaycee Carroll scored a triple for Madrid (29-20). Madrid extended to double digits once more, but David Blu continued his fine form from the semi-final to score the last 7 points of the half to tighten the deficit to 35-33 at half time.

Third quarter
It seemed like Fernandez had first call on opening points as he started the second half and the third quarter with another triple (38-33). Schortsanitis hit a triple for Maccabi, but Madrid kept moving the score too, although the Israeli team did regain the lead at 40-41 thanks to Ricky Hickman’s jumper. The teams started trading baskets as nether group of players could dominate, with the score locked at 47 apiece. Rodriguez hit from downtown before Devin Smith followed suit for Maccabi Tel Aviv, and Schortsanitis took a lay up to give the eventual champs a 50-51 lead. The score was changing on a regular basis and during the end of the quarter; eight consecutive scoring plays shifted the lead. As the 30 minute buzzer sounded, Rodriguez scored a lay up to restore Madrid’s advantage at 55-53.

Fourth quarter
Alex Tyus broke the Fernandez quarter opening streak when he tied the game again at 55-55 with a smashing dunk. Rodriguez claimed a triple for Los Blancos, but Hickman scored a two pointer and Rice sunk from distance to give Tel Aviv the lead at 58-60. It was not to last though and the teams continued to trade baskets and the lead in an enthralling battle of wits. Indeed, in the second half there were 19 lead changes and 7 tied scores. Rice was proving the pace setter for Maccabi and would be a game changer later on, but Madrid kept in touch and nothing could separate the teams. There were no scores in the final 21 seconds of regulation as the teams tied the game, with the score 73-73 after the final buzzer.

Overtime
The game headed into an extra frame. The 11,843 spectators would be treated to more Basketball action, although Madrid fans were scarce as the sea of yellow jerseys showed that 95% of the crowd came from the Tel Aviv camp. Madrid scored four points from the charity strip early in the added frame, but Maccabi kept in touch thanks to a triple from Rice (77-76). Rice then reeled off another five points without reply to claim the last 8 points in the game and give Tel Aviv a 77-81 lead. Rice then supplied an alley-oop for a Tyus dunk in response to more points from the line for Madrid (79-85). Rice hit another two points and Tyus scored again to extend Maccabi to double digits (82-92) and the Israeli team kept ticking over with baskets to keep Madrid at bay for the win.

Rice was phenomenal for Maccabi Tel Aviv in the fourth quarter and extra time as he won the Finals MVP. He collected 21 of his 26 total points in those periods to pace the Israeli club down the stretch and to propel them to Euroleague glory. Also scoring well for Maccabi was Hickman with 18 points, Blu with 14, and Smith with 15. Tyus had a solid all-round game with 12 points and 11 rebounds.

Rodriguez celebrated his Euroleague MVP award with 21 points for Madrid, while Fernandez had 15 points and 8 rebounds.