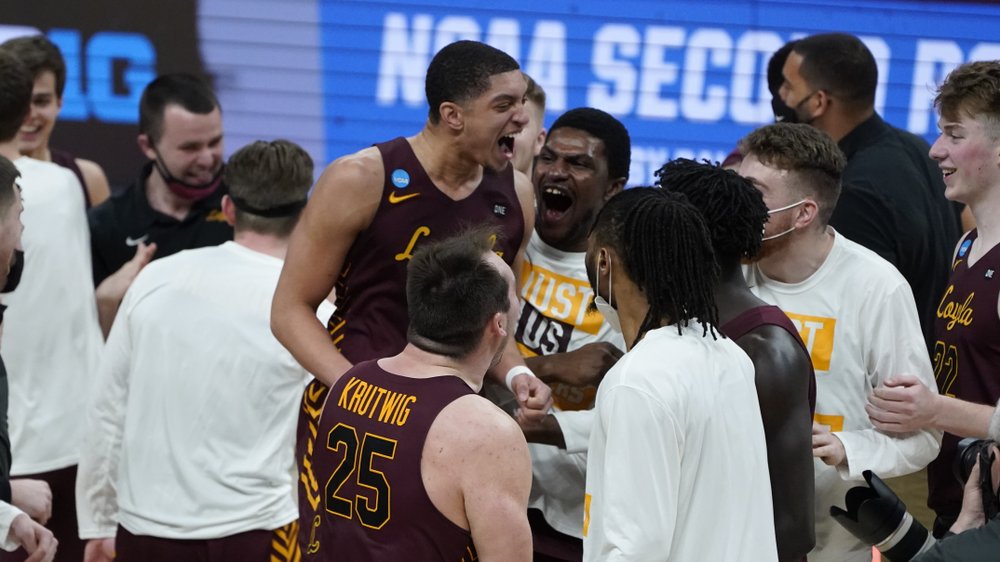 Loyola Chicago led from start to finish and shocked the No. 1 seed University of Illinois, winning 71-58 in an NCAA Tournament second-round game on Sunday in Indianapolis.

Cameron Krutwig sparked the eighth-seeded Ramblers (26-4) with 19 points and 12 rebounds.

It was a classic case of a team’s plan working at or near perfection.

“We just executed, played our game and controlled the game from the start,” Krutwig told reporters. “Nobody was really doing anything out of body or out of mind. We just stuck to the game plan.”

Up next: Loyola Chicago, which advanced to the Final Four in 2018, faces No. 12 Oregon State in the Midwest Region Round of 16. Oregon State defeated No. 4 Oklahoma State 80-70 on Sunday.

The Ramblers, who took a 33-24 lead into halftime, led by as many as 14 points in the opening half. To his credit, coach Porter Moser’s club never let the Illini finding their offensive rhythm.

For Loyola Chicago, guard Lucas Williamson poured in 14 points. Backcourt mate Keith Clemons also played a pivotal role on defense, making a pair of steals and teaming up with Williamson to limit Illinois All-American Ayo Dosunmu’s effectiveness. The Illinois star, who entered the game averaging 20 points per game, was held to nine points.

It wasn’t just an off-day for Dosunmu. Fellow guard Trent Frazier missed 9 of 10 shots and was held to two points.

“We tried everything in the bag,” Underwood conceded. “Everything that’s made us one of the most efficient offensive teams, today, just for whatever reason, didn’t work.”

As a result, the Illini became the first No. 1 seed to be eliminated in this tournament.

Now 101 years ago, Sister Jean was back in the spotlight for the 2021 NCAA Tournament. She got the OK from the NCAA to attend Ramblers tourney games after getting two COVID-19 vaccine shots.

“As we play the Fighting Illini, we ask for special help to overcome this team and get a great win,” Sister Jean said. “We hope to score early and make our opponents nervous. We have a great opportunity to convert rebounds as this team makes about 50 percent of layups and 30 percent of its 3 pointers. Our defense can take care of that.”