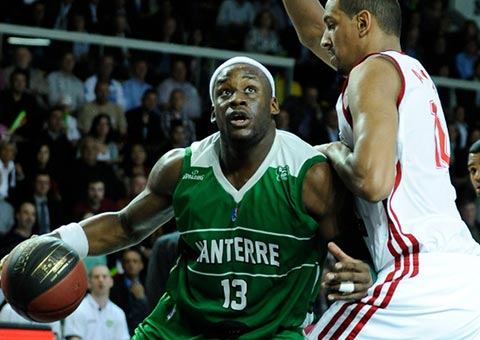 After Game 1 of the LNB best-of-five Finals Strasbourg had sent a not-to-subtle message with a 34-point win over Nanterre, they were not planning on being the next team that Nanterre would upset in the playoffs. After Game 1, many most likely believed just that and many teams would fold up after a pounding like they took. Fortunately, the boys from Nanterre seem to have missed the memo that the series was over before it started and used a big advantage in the first frame of the follow-up contest, then held on to take Game 2, in Strasbourg, 79:84, to even up the series as it heads to Nanterre for Games 3 and 4.

Trenton Meacham had a big game for the guests, knocking down 10 of 15 from the floor, including 6 of 9 behind the arc, to tally 26. Overall, Nanterre connected on 11 of 22 from beyond the arc, compared to 3 of 10 for the hosts. Strasbourg once again outrebounded Nanterre, this time 37-28. In Game 1, only one member of the Nanterre squad scored in double figures, on Friday they had four. Game 3 will take place on June 4th as a home game for the Nanterriens, but not on their home court, the Sports Hall in Nanterre, as it doesn’t seat enough spectators for the biggest series of the season. They will relocate a few miles up the road to the Pierre de Courbertin Stadium in Paris, home of league rivals, Paris-Levallois.

I was very disappointed with my game Wednesday. Strasbourg is a great team, we respect, but tonight we played our game rather than watch… We knew we had a second chance and we did it. We love playing in Nanterre, but the fact of going to Paris will not interfere with us. Our fans follow us and it will be amazing!
— Trenton Meacham (translated)

Strasbourg got their first points quickly, when Ricardo Greer put up an alley-oop for Alexis Ajinça for a big dunk with only 12 seconds gone in the contest. The guests put their shooters to work early, dropping 5 of 8 from behind the line in the first 10, building a 17:26 advantage.

At the start of the second Nanterre extended their lead to 17:32 due to a continued shaky start from the hometown club. By the time the first half would wrap up, Strasbourg would commit 10 turnovers. They got control of things and started to fight their way back. With the score at 23:37, the hosts went on a 12:0 run to pull to within a deuce, 35:37. Nanterre closed out the half with five singles to head into the break up 35:42.

Meacham opened the scoring in the second half with a triple, but Strasbourg ran off six unanswered to cut the margin to four, 41:45. For the rest of the third frame the clubs took turns with scoring runs, starting with the Nanterriens hitting seven to extend their advantage to 11, 41:52. Then it was SIG knocking down an 11:2 run to again pull to within a bucket, 52:54. At the end of the third 10 Nanterre held a 56:59 lead.

The home club struck first in the final frame to draw to a point, 58:59, but as was the case numerous times in the contest, as soon as Strasbourg had the lead in sight, the guests pulled away, this time tallying 10 straight to get up 58:69. With three minutes left on the clock, the visitors enjoyed a 15-point lead, 63:78. Strasbourg put up a final push and put up 14 while JSFN only added three, cutting the lead to four, 77:81, with a minute to play. In the final stretch, Nanterre held on, dropped in their charity tosses and picked up a big road win in front of nearly 6,200 Strasbourg friendlies. The win knots the series at a game apiece as they prepare to shift the series now to Paris.

It seems to have played badly. They offered a lot of aggression and we thought we had a margin unconsciously. It was too rough, and shows too much haste. That said, the series is long and it has only just begun but it is true that we lost the home field advantage.
–Aymeric Jeanneau (translated)

Trenton led the way for Nanterre with a game-high 26 points, Johan Passave-Ducteil and Stephen Brun dropped in 13 points each. David Lightly contributed 12.

Louis Campbell was high-man for Strasbourg with 20, Jeff and Ricardo Greer both knocked down 16, with Ricardo adding 10 rebounds.