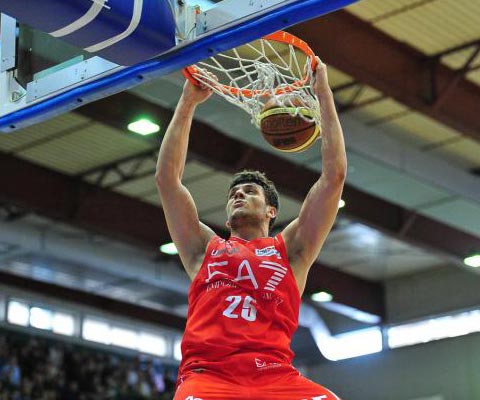 Members of Juvecaserta react to their 65:66 win over Lenovo Cantu

With just five weeks remaining in the Italy SerieA, the clubs continue to work for playoff positions, and Week 25 pitted a number of the top eight against each other bringing the number of games between the top clubs and those on the bubble even closer together. This week No. 2 Banco di Sardegna Sassari fell to No. 6 EA7 Emporio Armani Milano at home, 79:85; No. 1 Cimberio Varese pounded No. 3 Acea Roma, 81:58; No. 4 Montepaschi Siena was tripped up for the fourth time in five weeks, this time by No. 12 Sidigas Avellino, 75:70; No. 6 Lenovo Cantu fell to No. 9 Juvecaserta in the final seconds at home, 65:66, keeping Juvecaserta just two games out of the last playoff position; No. 7 Trenkwalder Reggio Emilia earned an important road win over No. 13 Enel Brindisi, 69:84, staying three games ahead of Juvecaserta; No. 8 Umana Reyer Venezia helped their playoff cause with a home victory over No. 10 Vanoli Cremona, 80:74, putting them three games up on Vanoli and staying two in front of Juvecaserta for the last advancement spot.

No. 1 Cimberio Varese improved to 20-5 on the season with an impressive 81:58 win over No. 3 Acea Roma at home. With the loss Roma falls to 18-7, staying one game out of the No. 2 spot and also remaining two games in front of the No. 3 clubs, Siena, Milano and Cantu, all at 15-10. The contest was close through the first half, with Varese heading into the halftime break up five, 33:28. To open the second half the hosts ran off eight straight and never looked back, outscoring Roma 21:10 in the third frame and then adding another seven to the margin in the final 10. Varese used a balanced scoring attack with eight players scoring eight or more, with Ebi Ere leading the way with 13 and Erik Rush adding 10. Roma got 19 from Luigi Datome and 13 from Jordan Taylor.

No. 2 Banco di Sardegna Sassari took a hard loss at home when they hosted No. 6 EA7 Emporio Armani Milano and came up on the short end of a 79:85 score. The win moved Milano into a three-way tie with Siena and Cantu at 15-10, while Sassari stays in the No. 2 slot with an 18-7 record, now two games out of first and just one ahead of No. 3 Roma. Sassari got the early lead, but Milano used an eight point run midway through the first to get a lead that they never gave up. Through the end of the first and into the second they ran off 14 unanswered to get up 22:40, but the hosts countered with a 20:11 run to end the half and cut their deficit to nine, 42:51, at the break. Milano added three to the margin in the third, but Sassari charged hard in the fourth with a 13:4 run to close out the game. Milano had built a 15 point advantage prior to allow them to hold on for the key win. Keith Langford was game-high for Milano with 26 points, Alessandro Gentile added 18 points and 5 rebounds, and Leon Radosevic dropped in 11. Drake Diener paced Sassari with 23 points and 6 rebounds, while brother Travis Diener and Tony Easley contributed 21 points and 6 rebounds each to the host’s efforts.

No. 4 Montepaschi Siena continued their free fall in the SerieA with their fourth loss in five weeks, their Week 25 loss came on the road to No. 12 Sidigas Avellino, 75:70. The loss moves Siena into the traffic jam at No. 4 with Cantu and Milano. Avellino keeps their playoff hopes alive with the win as they sit three games out of the No. 8 spot held by Venezia. Montepaschi jumped out quick, building a 8:21 lead midway through the first frame. Avellino cut the lead in half by the end of the first 10, knocking down 10 free throws along the way to head into the second quarter down 20:26. The hosts took the lead four minutes into the second stanza after an 11:4 run to bring the score to 31:30. The clubs exchanges baskets and the lead for the rest of the half to head into their break with the score 42:41. Things took a quick turn for Avellino as they opened up the second half knocking down three triples, then went inside for a dunk and an tip in off a miss to cap a 15:3 run, giving them a 57:44 lead midway through the third. Siena tallied six unanswered to cut the lead to seven and shortly after Kristjan Kangur sliced the cords on two consecutive three-balls to pull the guests to within three at 59:56. Heading into the final 10 five points separated the clubs with Avellino up 63:58. David connected on three charity tosses for Siena to pull to within one, 71:70, but after Brandon Brown was fouled and knocked down his pair of singles and Siena missed their three-point attempt to tie, they were forced to foul. Siena never got another shot off and Avellino held on for the win. Jaka Lakovic lead Avellino with 19 points, Kaloyan Ivanov added 15 points and 10 rebounds, and Jimmy Lee Hunter contributed 14 points to the win. Bobby Brown paced Siena with 20 points, Kangur added 16 points and 8 rebounds, and Moss dropped in 10.

No. 4 Lenovo Cantu was taken to the wire by No. 9 Juvecaserta and lost in the final seconds, 65:66, to fall into the three way tie with Milano and Siena at 15-10. Juvecaserta stays two games out of the playoffs at 11-14 with the win. This was a tight battle from start to finish as the two clubs traded off winning quarters and neither by more than three points until the fourth. Cantu took the first frame 16:14, but the guests rallied and knotted the score at the half at 31. In the third the hosts got the advantage again outscoring Juvecaserta 19:16 to head into the last frame up 50:47. Cantu extended their lead to six when Nicolas Mazzario was fouled on a triple attempt and connected on all three singles. The guests knotted the score at 55, then the clubs traded the lead before Juvecaserta got out by four, 59:63. Marco Cusin threw down a dunk for Cantu and shortly after split a pair of three throws to pull the hosts to within one, 62:63. Andrea Michelori hit a deuce for the visitors and the Maarten Leunen knocked down a three-ball to tie the score at 65 with a minute to play. Domenico Marzaioli was fouled as time was winding down and connected on one of his two charity tosses to put the guests up one, 65:66. Peter Aradori got a triple off at the buzzer, but came up empty for Cantu, giving Juvecaserta a big win on the road to stay in the playoff race. Stevan Jelovac lead Juvecaserta with 17 points and 12 rebounds, Stefano Gentile added 12 points and 5 rebounds, and Jeleel Akindele contributed 11 points and 6 rebounds. Aradori was game-high for Cantu with 19 points and 5 rebounds.

No. 7 Trenkwalder Reggio Emilia kept their position in the playoff race with a solid road win over No. 10 Enel Brindisi, 69:84. The loss dropped Brindisi from No. 10 to No. 12 and the win puts Trenkwalder at 14-11 and just one game behind the trio locked in No. 4 at 15-10. The guests built a 30:36 advantage at the half and then blew the game open in the third, outscoring Brindisi 14:24 to head into the final frame up 44:60. The hosts picked off one point in the last 10, but weren’t able to overcome the deficit and gave Trenkwalder a big win that keeps them three games up on Juvecaserta with just five games remaining in the regular season. Troy Bell was game-high for the guests with 24 points. Donell Taylor added 17 points, 5 rebounds, and 4 assists, Greg Brunner contributed 14 points and 11 rebounds, and Andrea Cinciarini added 13 points and 6 rebounds. Scottie Reynolds led the way for Brindisi with 22 points and 4 rebounds, and Jonathan Gibson dropped in 12 points.

No. 8 Umana Reyer Venezia overcame a 16-point deficit at the end of the first quarter to pick up a much needed home victory over No. 9 Vanoli Cremona, 80:74. The win improves Venezia’s record to 13-12, two games ahead of this week’s No. 9 club, Juvecaserta. The loss drops Cremona to the No. 10 spot and into a four-way tie with Sutor Montegranaro, Sidigas Avellino, and Enel Brindisi at 10-15, and three games out of the last playoff spot held by Venezia. Cremona came out swinging, running off 15 unanswered points to get up 4:19 before their hosts would tally another point. By the end of the first 10 the guests were up 6:22. On the strength of scoring runs of 7:0 and 5:0, the hosts were able to cut deep into their 16-point disadvantage in the second, outscoring Cremona 29:20 to head into the break down 35:42. The hosts knocked down the first five of the second half and then knotted the score at 47 midway through the third 10. They built a five point lead until Vanoli’s Brian Chase hit a three-pointer with just under two minutes to play in the third quarter, which would be the last points scored in the frame, giving Venezia a 58:56 lead heading into the last stanza. The home club got up by as many as seven early in the frame, but a pair of Vitali Luca singles brought the guests back to within two with just over two minutes to play. Alvin Young got two baskets in the paint to push the lead back to six. Chase cut it to four with a pair of free throws and then Venezia went five of six from the line as Cremona had to foul to try to get the ball back. Chase did hit a three-ball late to cut the lead to four, but that was the last bucket the guests would get. Keydren Clark was game-high for Venezia with 19 points. Jiri Hubalek added 15 points and 5 rebounds. Guido Rosselli contributed 13 points and 5 rebounds, and Yakhouba Diawara sank 10. Hrvoje Peric led Vanoli with 15 points and 7 rebounds, Chase and Andrija Stipanovic (12 rebounds) contributed 14 each to the guests tally, and Vitali added 11 points and 6 rebounds.