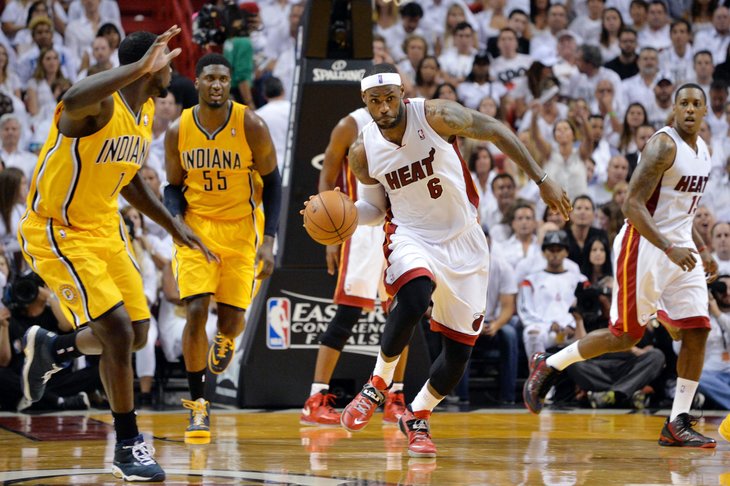 It is a potentially make or break season for the Miami Heat, but whatever happens post campaign the franchise will be able to look back on another NBA finals series. The franchise booked its fourth finals appearance in as many years (joining the Lakers and Celtics in that club) by humbling the Indiana Pacers 117-92 at home, a crushing win that answered a few questions.

The Pacers have provided a challenge to Miami’s supremacy in the Eastern Conference this season, with Indiana playing the kind of ball that got some thinking they could dethrone the Heat. Sure, Frank Vogel has led his charges close, with the Pacers winning Game 6 to plunge the series into a decider. In the end though, Miami’s championship class showed through. As for the Heat, this is about so much more than simply defeating the Pacers or proving a point (they downed Indiana for third straight season), it is all about the finals and of course the title.

It could be argued that this is a must win NBA championship for the Florida based franchise, it is certainly vital if a legacy is to be created. Miami has the last two NBA titles to its name, but three in a row will look so much better jotted in the history books, it is the kind of number that commands attention. That magical three-peat would assure that this Heat team is revered through time, while there is also the admittedly unlikely possibility that this could be the franchises last bite at the NBA championship for some time.

Much has been written and discussed this year about the fact that LeBron James, Chris Bosh, and Dwayne Wade are free to terminate their contracts at the end of this season. The golden trio have propelled the Miami Heat to these heights and made the franchise the most formidable force in the NBA at the moment. The triumvirate are all making the right noises about staying with the franchise, but the worst case scenario is that all depart Miami and leave the Heat back at square one.

That is a worry for another day though, for now the Heat can look forward to a face off against the San Antonio Spurs or the Oklahoma City Thunder. With the myriad of interesting subplots surrounding the Heat this season it is easy to forget that there was actually a game of Basketball last night.

The Pacers got off to the better start with the visitors taking an early 2-9 lead. Powered by James and Bosh, the Heat answered in the most emphatic of fashions, pouring in baskets through the middle quarters to outscore Indiana 54-21. Even though the Pacers won the last frame by eight points, it was not enough to reel in Miami, with the home team in total command of the scoreboard.

LeBron James and Chris Bosh set the tone for the Heat with 25 points each, and James was eager to stress that this is a job half done. He was also full of praise for the franchise, offering further hints that the best player in the league will remain in Miami next season.