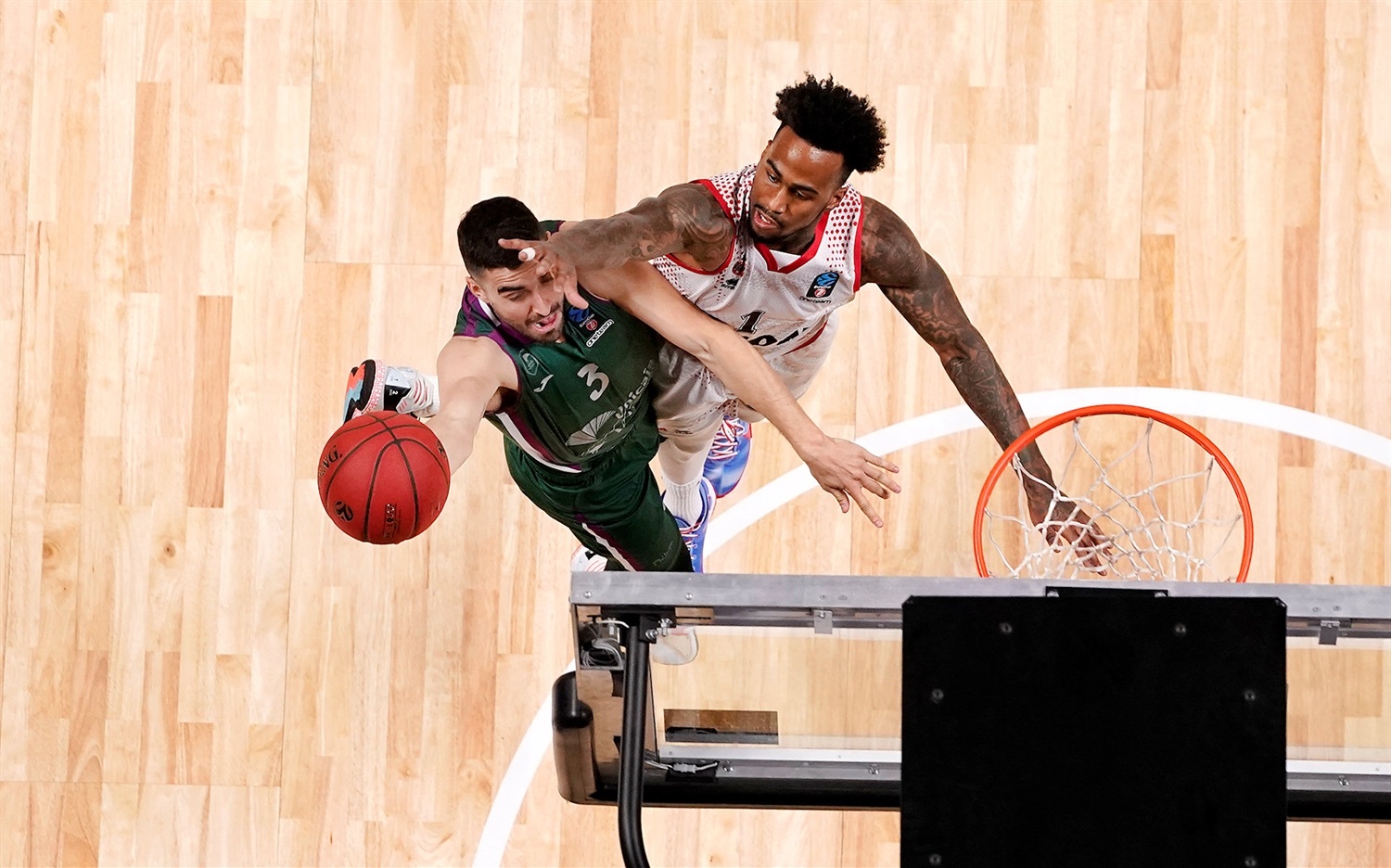 Tuesday night action saw Buducnost VOLI Podgorica and Joventut Badalona register respective wins to send themselves into the 7DAYS EuroCup Quarterfinals. Buducnost bested Cedevita Olimpija Ljubljana to clinch second place in Group G and set up a quarterfinals showdown with Group E winner AS Monaco. Then Joventut defeated Nanterre 92 to finish second in Group E. it will face Virtus Segafredo Bologna in the quarters. On Wednesday, victories for Boulogne Metropolitans 92, Lokomotiv Kuban Krasnodar, and Herbalife Gran Canaria ushered them into the playoffs. Metropolitans finished first in Group F and will play Gran Canaria in the quarterfinals. Group H winner UNICS Kazan will challenge Lokomotiv in a series between former EuroCup winners from Russia.

Joventut Badalona reached the EuroCup Quarterfinals with an 88-95 victory over Nanterre 92 at Maurice Thorez. Joventut finished second in Group E with a 4-2 record and will face Virtus Segafredo Bologna in the next stage. Nanterre, which needed to win by at least 6 points to qualify, was eliminated from third place at 2-4. Ante Tomic led the winners with 18 points, and Pau Ribas added 16 on 11-of-11 free-throw shooting. Marcquise Reed paced Nanterre with a career-high 27 points. Joventut was up 45-47 at halftime before Xabi Lopez-Arostegui led a 0-11 run that boosted the guests’ margin to 47-61, and Joventut kept full control of the situation until the final buzzer AS Monaco defeated Unicaja Malaga 89-98 on the road on Tuesday night. The visitors built an early 6-15 lead but allowed 37 second-half quarter that saw them trail 76-71 early in the fourth. Consecutive three-point plays by Mathias Lessort and Rob Gray boosted a 2-13 run down the stretch that sealed the outcome for the visitors, who finished first in the group with a 5-1 record. Mathias Lessort led the winners with a double-double of 21 points and 11 rebounds, both career-highs, against his former team. Jaime Fernandez poured in a career-high 28 points on 5-of-8 three-point shooting for Unicaja, which finished last in the group with one win in six games.

A late rally from 9 points behind in the fourth quarter lifted Boulogne Metropolitans 92 past host Partizan NIS Belgrade 70-75 and into the quarterfinals at the end of a thriller in the Serbian capital on Wednesday. Metropolitans took first place with a 4-2 record, while Partizan was eliminated after falling to 2-4 on a sweep by the visitors. Brandon Brown supplied the game’s 12th and final lead change on a three-pointer, and Anthony Brown, his team’s leading scorer with 18 points, hit another in the final minute to seal the deal for the winners. Rashawn Thomas had 20 points for Partizan. Earlier Wednesday, Lokomotiv Kuban Krasnodar advanced to the quarterfinals with an inspired 100-86 victory over Dolomiti Energia Trento at Basket Hall. Both teams finished Group F with 3-3 records. However, Lokomotiv earned the tiebreak edge over Trento to clinch a spot in the next stage. Mindaugas Kuzminskas starred with a career-high 26 points plus 9 rebounds, and Mantas Kalnietis came up big with 21 points, 10 assists, and 3 steals for the winners. JaCorey Williams led Trento with 27 points on 13-of-17 shooting plus 10 rebounds.

Buducnost VOLI Podgorica dominated down the stretch to defeat Cedevita Olimpija Ljubljana 79-66 at Moraca and clinch a spot in the EuroCup Quarterfinals. The hosts needed to win by at least 4 to advance. Otherwise, Olimpija would have claimed the ticket to the playoffs, but Buducnost dominated the fourth quarter 21-9 to set up the celebrations. The victory gave Buducnost a 3-3 record, like Olimpija, but the Montenegrin side advanced via the tiebreaker. Melvin Ejim tied his career-high with 20 points to lead the Buducnost attack, and Nikola Ivanovic added 17 off the bench. Jaka Blazic paced Olimpija with 18 points. Virtus Segafredo Bologna finished the Top 16 undefeated as it rolled past JL Bourg en Bresse 83-62 at home. Julian Gamble led the way with 15 points for Virtus, which had already locked up first place in Group G coming into the game. Bourg made things interesting with a late third-quarter run but failed to pick up a Top 16 win in its debut on the European stage, finishing at 0-6. Danilo Andjusic was Bourg’s top scorer with 17 points.

Herbalife Gran Canaria survived yet another do-or-die situation by downing UNICS Kazan 96-90 at home on Wednesday to clinch a spot in the quarterfinals. After a 0-3 start in the Top 16, Gran Canaria finished second in Group H with a 3-3 record due to its tie-break advantage against MoraBanc Andorra. UNICS dropped to 5-1. A.J. Slaughter led the winners with 24 points, and Matt Costello and John Shurna each added 14. Jamar Smith scored a career-high 32 points in defeat. Gran Canaria hit five three-point shots in the first quarter to take a 31-17 lead after 10 minutes. Gran Canaria boosted its halftime margin to 57-40 and then to 78-58 and then held on the rest of the way. Andorra did its part to stay in the race by knocking off Mornar Bar 89-61 at home, but its campaign ended when Gran Canaria won. Jeremy Senglin led the way with 16 points and six rebounds for Andorra, which finished Group H with a 3-3 record in third place. Mornar got 13 points from Nemanja Vranjes and bowed out of its first-ever Top 16 with a 1-5 record.