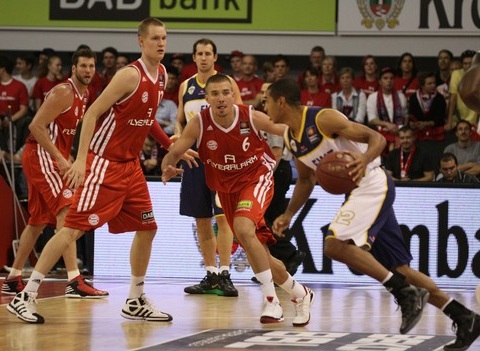 As many leagues in Europe and elsewhere have seen multiple contests already, a handful of European leagues tipped off yesterday namely the German Beko Basketball Bundesliga (BBL), the Finish Korisliiga, and the Russian Professional Basketball League (PBL). The show stopper of the day was the thrashing FC Bayern Munich took at the hands of EWE Baskets Oldenburg, on Bayern’s home court, less than one week after management decided to fire head coach Dirk Bauermann

Beko BBL Wrap-up
The 2011-12 season was dominated by the squads from Brose Baskets and Ratiopharm, who finished 1-2 in regular season play, as well as in the league playoffs. As the 2012-13 campaign was ready to get underway, the German basketball society was shocked to hear that FC Bayern Munich had fired Dirk Bauermann, who has also been the German National Team coach for a number of years. Assistant coach Yannis Christopoulos was named new Bayern head coach in the wake of Bauermann’s dismissal and the team had to prepare for the changes with very little time prior to the season starting. The top three teams from 2011-12, Brose Baskets, Ratiopharm Ulm, and ALBA Berlin, all took care of business on Wednesday with wins.

EWE Baskets Oldenburg – FC Bayern Munich 80-61. It took Bayern three quarters to seem like they had any life in them, according to a post-game comments by newly appointed head coach Christopoulos, “In the second and third quarter, we did not fight hard enough, especially in rebounding today we had deficits and lacking in attack.” The hosts held a single-point advantage after the first quarter, but found themselves down by 18 at the half. During the third frame the Oldenburg margin extended to as much as 30, before the Munich boys got their rhythm and pulled themselves together. By the time the final horn sounded the home crowd of over 5,000 were left wondering what management was thinking in the timing of their decision to remove Bauermann. Only time will tell if the move is a positive one for the team.

Brose Baskets – Eisbaren Bremerhaven 85-68. A home crowd of 6,800 saw the defending champions open their new season in style with a substanial victory over visiting Bremerhaven, 85-68. Maik Zirbes had the hot hand for Brose, shooting eight for nine from the floor and six for seven from the charity stripe, to tally 22 points total on the night.

Ratiopharm Ulm – New Yorker Phantoms 92-91. In front of 4,129 fans, the Phantoms took the BBL’s second place squad all the way to the end of regulation and into overtime, before falling by one. Free throws were the key in this game down the stretch as Steven Michael dropped in two from the charity stripe for Ulm with three seconds left in regulation to put the visitors up by three. Casey Mitchell sent the game into an extra frame when he drained a three-ball shortly after to tie the contest at 80. At the end of the extra five-minutes, Philipp Schwethelm was fouled with four seconds on the clock and Ulm down by one, calmly dropped in both free tosses and gave Ratiopharm Ulm the win.

Russian PBL Wrap-up
The Russian PBL tipped off with the top squad, CSKA opening their season with a blow-out against Spartak-Primorie and the numbers two and three from 2011-12 Khimky and Triumph squaring off on the first night.

CSKA – Spartak-Primorie 82-51. Spartak, who finished fifth in the PBL in 2011-12 with an 8-8 record, looked like they might give the defending champions a game, coming out of the first quarter with a six-point advantage, but things changed quickly after a 25-4 second quarter that favored CSKA. Milos Teodosic dropped in 16 points and dished off five assists in the winning effort for CSKA. Four CSKA players turned in double figure performances. Troy Gillenwater tallied 17 points and six rebounds for Spartak.

Khimky – Triumph 76-72. In the battle of the number two and three, the host squad Khimky took the first game of the season. Triumph took the first quarter 18-15, but Khimky rallied to take a two-point advantage into the halftime intermission. They battled to a 17-17 tie of the third frame and the hosts added two more to the margin in the last 10-minutes with a 25-23 score. Vitally Fridzon lead Khimky with 20 points and Alexey Zhukanenko dropped in 17 in the win. Sergey Karasev lead all scorers with 23 for Triumph and Tywain McKee contributed 14 in the loss.

Finnish Korisliiga Wrap-up
During the regular season, Kataja stood out taking the top spot with a 31-9 record. Following closely behind were the Nilan Bisons at 28-12, and Pyrinto with an equal 28-12 mark. Kataja made it through to the finals of the league playoff with easy wins over Salon Vilpas (3-0) and ToPo (3-1), but the Bisons and Pyrinto met up in the semi-finals, with the Bisons moving on with a 3-2 series win. In the championship series, Nilan stopped Kataja 3-1 to take the league playoff championship. In 2012-13, Kataja has just earned a spot in the EuroChallege and will begin that season on Nov. 6th. They got the first week off, but will open their Korisliiga campaign on Oct. 8th against Korihait. Nilan also had the first night off and will open against Kauhajoki on Oct. 7th.

Pyrinto – Lapua 93-79. This contest was close for one half, as the two teams battled to a 21-all tie after one, and a two-point advantage for Pyrinto at the half. In the third the visitors extended their lead to seven and the doubled that in the final frame. Damon Williams tallied a triple-double with 19 points, 10 rebounds and 10 assists for Pyrinto in the win. Team mate Lamonte Ulmer added 21 points and seven rebounds. Samuel Haanpaa dropped in 18 points for Lapua, while Chris Commons added 19.

Namika Lahti – Kauhajoki 86-88. Kauhajoki finished fourth in the 2011-12 Korisliiga regular season and were beaten by ToPo in the first round of the playoffs, but opened the 2012-13 with a two-point win over last season’s league bottom-dweller Namika Lahti (11-29). J’Nathan Bullock accounted for 23 points in the win for Kauhajoki and Giordan Watson added 18 points and five assists. Namika Lahti got 25 points from Emmanuel Holloway and seven assists, while Louis Johnson added 17 points and eight rebounds in the loss.