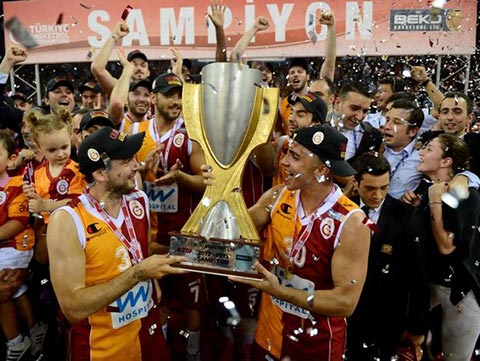 The 2012-13 Turkish Basketball League (TBL) champions were crowned on Saturday night after Galatasaray Medical Park defeated Banvit, 76:58, in Istanbul. This marks the first TBL title that Galatasaray has won since 1990 and with the Galatasaray Football club’s recent championship, it’s the first time in 44 years that both teams have won a title.

Banvit had won Game 4 86:85 to extend the series to a Game 5, which saw the clubs shift venue to Galatasaray’s home arena in Istanbul, the Ali Sami Yen Spor Kompleksi – Türk Telekom Arena. They played Games 3 and 4 at the Bandırma Kara Ali Acar Sports Hall.

The hosts got the early lead and never let it go in their pursuit of the TBL trophy. Just four minutes into the contest they had already build an 11:4 advantage and were able to extend that to 16:4 shortly after. Banvit was able to slice the deficit as time ticked away on the first 10, pulling to within six, 18:12, at the end of the frame.

Cenk Akyol had the hot hand for Galatasaray in the first half, knocking down five triples on his way to a game-high 22 points. To make matters worse for Banvit, while Akyol was draining threes from a distance, forcing the defense to tighten up on him, Ndong Boniface was in the paint wreaking havoc on bigs, scoring 14 in the half. At the mid-game break the hosts had the contest firmly in hand, sporting a 37:23 advantage as they retired to the dressing rooms to discuss and strategize.

As the second half tipped off, the home club picked up right where they left off and they stretched their lead to 50:31. Playmaker Carlos Arroyo got into the mix and the big three of Arroyo, Boniface and Akyol put the game essentially out of reach in the third 10, having compiled a 25-point lead, 62:37, as the contest entered the final 10.

Banvit was able to control the pace and the score in the fourth frame, cutting the difference from 25 points to 18 as the final buzzer sounded, but it wasn’t enough to force a Game 6 and Galatasaray gathered all their team members and VIPs at center court for their first awards presentation in the TBL in 40 years.

Akyol was game-high with 22; Boniface added 16 and Arroyo dropped in 15.