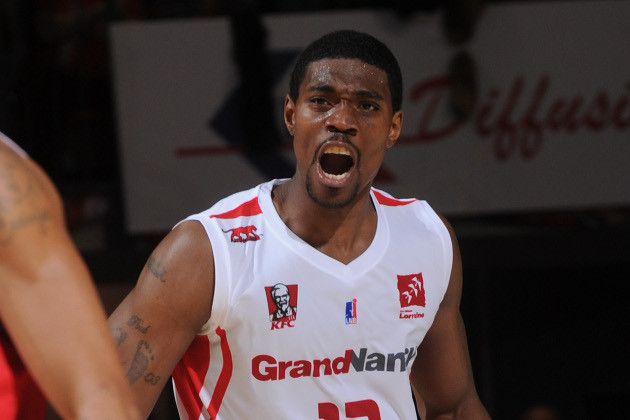 The French ProA is going right down to the wire as Round 26 of the league failed to really separate the teams fighting it out at the top. Throughout the campaign it has been uncomfortably tight and with just four rounds to go in the Regular Season it seems “games against” is going to be a hugely important deciding factor.

Nanterre vs. Strasbourg, 89-93
Strasbourg continued to lay down a marker for the season title by outperforming Nanterre on the road. The season has not worked out well for Nanterre, with the clubs´ Euroleague campaign taking a lot out of the team during the start of the campaign. Strasbourg entered the game as strong favourites, but trailed by a single point after thirty minutes of play before taking a victory in the fourth.

Nanterre´s lead was built on a successful first quarter as the hosts found the net consistently to take a confident 28-21 lead after the first period. Strasbourg got to grips with the Nanterre offense in the second quarter and managed to take the frame 19-20 to put the score at 47-41. The visitors would need a big third quarter and they got it by consistently scoring from the charity strip. With 30 minutes on the clock the lead had been cut to one point, with the score board now reading 69-68. Nanterre still held a slender advantage, but the home team slipped in the fourth as Strasbourg scored 25 and limited Nanterre to 20 in a game winning effort.

Trenton Meacham gave Nanterre a strong base early in the game and went on to record a game high 22 points. Also hitting double figures in the losing effort were Sergii Gladyr (17 points), DeShaun Thomas (13 points), Will Daniels (13 points), and Marc Judith (11 points).

The win puts Strasbourg top of an increasingly close French ProA, but the club only enjoys its place thanks to good head to head. With a record of 17-9, Strasbourg is locked with Limgoes and Le Mans on the same record. Nanterre´s season looks to be over, although a late spur could theoretically put the club back in playoff contention. For that to happen though, Nanterre would need several teams above them to collapse, so it does look like the defending champs have fallen at the first hurdle.

Nancy vs. Le Mans
Nancy slipped to a 62-68 home defeat against Le Mans despite tying the game after three quarters. The visitors used a strong 16-22 fourth stanza to snatch a win that keeps them in contention with a 17-9 record at the top of the French ProA.

Orleans vs. Dijon
Terence Dials led Orleans with a 22 point contribution as the club overcame Dijon 76-60 at home. The hosts won every quarter and used a strong third period to make victory down the stretch comfortable. The win put Orleans back into sixth place tied with four clubs with a 15-11 record. Despit the loss Dijon stays on fourth and is tied with Paris-Levallois on 16-10.

ASVEL Lyon vs. Antibes
Overtime was needed to separate ASVEL and Antibes and even then the score was only decided by one point. ASVEL emerged victorious at home with a 73-72 win to move up to 7th place with a 15-11 record. Antibes´ season continues to collapse as the team rooted itself further to the bottom of the French ProA with a 5-21 record.

Cholet vs. Paris-Levallois
Despite a poor season, Cholet played for pride and defeated title chasing Paris-Levallois 68-64 at home. Lamayn Wilson paced the winners as the hosts recovered from a losing first half to outscore Paris in the third and fourth quarters. Cholet climbed to 12th with an 11-15 record, while Paris slipped to sixth with a 16-10 record.

Le Harve vs. Chalon
Le Harve picked up a routine 86-69 home win over Chalon for a result that surprised a few. The winners are currently ranked 14th with a poor (but now improved) 7-19 record, while Chalon sits in 8th with a 15-11 record. The visitors would have fancied their chances on the road in this game, but Le Harve played well and won every frame to secure the victory.

Limgoes vs. Gravelines
The game between Limgoes and Gravelines Dunkerque went to form as the home team recorded a solid 61-54 victory. Nobel Boungou Colo led second placed Limgoes with a fantastic display that included 25 points and nine rebounds.

Pau-Lacq-Orthez vs. Roanne
The second overtime game of the week saw Pau-Lacq-Orthez scrape an 86-80 win over struggling Roanne. The teams were locked at 77 apiece at the end of regulation time, but the hosts restricted Roanne in the extra period to pick up the win. The winning effort was propelled by a stunning 33 point haul from D.J. Strawberry.