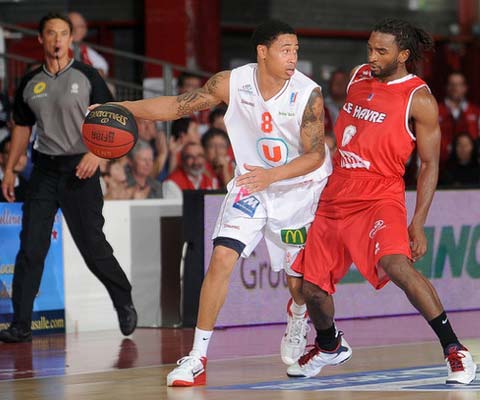 As the France LNB wrapped up Week 28 of 30 Saturday, the majority of the top half of the league ended up on the losing end of their respective scores. With just two weeks left in regular season play, the shuffle for positions as playoffs are set to begin is important for all clubs to determine playoff matchups and home court advantages. With the top five teams losing, as well as the No. 7 team, the middle of the pack has tightened up dramatically. Interestingly, every game was won at home by the lower seeded team.

ASVEL Lyon-Villeurbanne – Gravelines-Dunkerque, 67:65
The No. 1 club in the LNB took to the road to face No. 6 ASVEL in a critical game for the hosts as there are seven teams within range of the last five playoff positions. The win puts Lyon-Villeurbanne at 16-12 and tied with Le Mans and Roanne, just one game ahead of Nanterre at 15-13, and two games in front of two clubs at 14-14 (Cholet and Orleans). Dijon also has 14 wins, but they also have played an extra game and sit with 15 loses. The guests remain at top of the league at 20-9 and have clinched the league title, having already played 29 games as well.

Gravelines got out to the early lead with a 10:12 first quarter, but ASVEL took control in the second and amassed a 15-point lead heading into the intermission with a 25:8 second quarter score. The visitors cut the gap to eight in the third frame by outscoring Lyon 15:22, to head into the final frame still down 50:42. Gravelines made a solid effort to come back in the fourth, but fell two points short. The results have no impact on Gravelines standing, as they’ve sewn up the league title due to Chalon and Strasbourg both losing as well.

Edwin Jackson was high-man for ASVEL with 13 points, and Amara Sy contributed 11. Dwight Buycks was game-high with 21 for Gravelines, J.K. Edwards added 18, and Kennedy Winston dropped in 11.

Cholet – Chalon/Saone, 79:78
In another game that came down to the wire, No. 8 Cholet picked up their third straight win, and their fifth in six games, with a 79:78, come-from-behind win at home over No. 2 in the LNB, Elan Chalon. The win keeps Cholet in the hunt for a playoff spot as they are currently seeded No. 8, but are tied with Orleans at 14-14. With just two games remaining, they can move up if games fall their way. Cholet and Orleans square off in Week 29 with contest being held in Cholet. The loss prevents Chalon from a shot at the league title as they lose the tie-breaker to Gravelines and Gravelines only has one game remaining.

Cholet got out quick against Chalon, building a 28:18 lead after the first quarter. The guests fought back to within three at the half, 46:43, and continued their hot hands in the third holding Cholet to just 11 points in the third 10. The clubs headed into the last quarter with Elan Chalon up 57:60, but the guests were outscored 22:18 in the fourth to hand the win over to their hosts, 79:78.

Dijon – Strasbourg, 84:69
Dijon used a 27:10 fourth quarter to keep themselves in the race for the eighth playoff spot with their 14th win, an 84:69 pounding of Strasbourg in Dijon. The No. 3 club fell to 17-11, a game out of second and only one up on Le Mans, Roanne, and Lyon-Villeurbanne. The lost was Strasbourg’s third straight, and their fourth in the last five games.

Strasbourg controlled the game through the first three quarters, taking an 18:24 lead out of the first, a 41:42 score at the halftime break, and 57:59 after three quarters. It was the fourth that did them in though as they allowed their hosts to outscore them 27:10 in the last 10 minutes to earn the win.

Jeremy Leloup was game-high for Dijon with 20 points, Larry Owens added 19, and Ferdinand First dropped in 13. Alexis Ajinca led the way for Strasbourg with 17 points and 7 rebounds, and the duo of Louis Campbell and Romain Duport contributed 12 points each for the guests.

Orleans – Le Mans, 83:67
No. 9 Orleans kept their playoff aspirations in tact with a rout of No. 4 Le Mans, 83:67 in Orleans. The win keeps Orleans in pace with Cholet at 14-14 with a huge match-up between the two clubs next week. The loss for Le Mans drops them to 16-12 and in a tie in the standings with Roanne and Lyon-Villeurbanne.

The clubs played to a 21:20 tally after the first frame and Orleans grabbed a big advantage in the second with a 24:13 score in the quarter. They headed to the locker rooms with Orleans up 45:33 at the half. Le Mans bridged the gap in the third stanza, outscoring their hosts 9:22 to pull ahead by one, 54:55. The lead was short-lived though as Orleans held their guests to just 12 in the final frame, while knocking down 29. As the final horn sounded the hosts had earned a solid 83:67 victory and a shot at grabbing the eighth playoff spot next with if they can defeat Cholet next week.

Le Havre – Roanne, 78:70
Le Havre is out of the race for the playoffs, but their 78:70 home win over No. 5 Roanne in-part caused a traffic jam in the middle of the top eight clubs as the loss drops Roanne to 16-12 and tied with two others. The loss was also Roanne’s second in three weeks.

The hosts didn’t beat up on the Roanne, but they did win three of four quarters, building a 14-point lead heading into the final 10 in the process. After the first Le Havre was up 21:17, then they took a 36:30 advantage to the intermission at the half. They were able to pad the gap a bit in the third with an 8-point margin to get up 58:44. Roanne attempted a come-back in the fourth, outscoring their hosts 20:26, but the difference was too much and they ran out of time falling 78:70.

Boulazac – Nanterre, 75:63
In a critical game for both clubs, Boulazac got a much needed win as they fight to not be relegated to Pro B next season, currently sitting in the No. 15 spot in the league. For Nanterre, they are in the No. 7 position at 15-13, one game behind the trio at 16-12, and one game in front of the trio with 14 wins. With two games remaining, where Nanterre will end up is completely up in the air. In this contest, held in Boulazac, the club fighting relegation won out 75:63, and pulled to within one of the club right ahead of them, Nancy, who is 10-17 and has three games to play.

Nanterre controlled the first half, building a six-point lead in the first quarter and adding another point in the second to head into the dressing rooms at the half up 34:41. The turning point of the game was the third quarter as the hosts came out and held Nanterre to just 7 points in 10 minutes, to take a 52:48 advantage into the last 10. In the final frame Boulazac also played big, outscoring their guests 23:15, to walk off the court at the end of the contest with a solid 75:63 win and hope for keeping their standing in the Pro A next season. For Nanterre, their season is pinned on next week’s match-up with No. 3 Strasbourg, a club searching for answers to their downward spiral. Either they’ll keep freefalling next week, or figure things out and come out to pound any team that stands in front of them to get ready for the playoffs…

Boulazac was led by Amadi McKenzie’s 17 points and 14 rebounds. Alex Acker added 16 points and Arnaud Kerckhof dropped in 13. Nanterre got a game-high 20 from David Lighty, and 11 points and 6 rebounds from Juan Palacios.