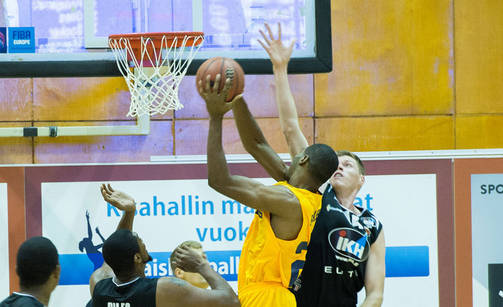 The Finnish Korisliiga is underway for the 2014/2015 campaign with five games tipping off the season on Wednesday. Eleven teams make up the top flight of Basketball in Finland so the action is rapid and the season is always packed full of drama, with a healthy helping of twists and turns along the way. A big talking point is the fact that capital city Helsinki will be represented in this season’s Korisliiga thanks to the promotion of Helsinki Seagulls during the last campaign.

All eyes now turn to the hardwood as the competing teams enter another gruelling Regular Season that will end on April 14th, 2015 after 40 rounds of action. The play-off games this season will run from April 18th until May 19th, with the top 8 teams from the Regular Season competing. Pyrinto Tampere will be looking to defend their Finnish Korisliiga title this season and the champions were in action on day 1 of the campaign.

Pyrinto Tampere vs. Tapiolan Honka, 90-67
Reigning champs Pyrinto Tampere welcomed Tapiolan and traded blows with their guests through the first quarter. Both teams went bucket for bucket to match scores after 10 minutes, the scoreboard locked at 23-23. The hosts started to show their class in the second frame at both ends of the floor, offering 21 points in offense and holding Honka to 13 in defence. At the halftime buzzer the score was 44-36 in favour of the champs. Tampere added to the score in the third quarter, adding another 23 points to extend its lead to 67-54 after 30 minutes of play. The visitors were overwhelmed by the consistent scoring of Pyrinto as the home team notched another 23 points in the fourth quarter to ease to victory. Asenso Ampim was the driving force in the winning effort, nabbing a double-double of 24 points and 15 rebounds.

Namika Lahti vs. Lapuan Korikobrat, 86-93 OT
Lapua based outfit Korikobrat travelled to Lahti and came away with the victory after seeing off Namika Lahti after four close quarters and an added overtime period. The visitors never had it easy and the game could have gone either way, with the hosts taking a 22-19 lead after the first period. The teams swapped baskets in the second quarter and could not be separated, tying the frame 18-18 (40-37 at halftime). Namika got the better of the third stanza (22-21) to extend its lead to 62-58 after thirty minutes, holding a four point lead at the buzzer. Lapuan came back in an edgy fourth to win the 10 minutes 18-22, enough to send the game into overtime. After a tied regulation and 22 lead changes and 8 ties, the visitors outpaced Lahti in the OT period to win the game.

Helsinki Seagulls vs. Kauhajoki Karhu, 67-72
The Seagulls have brought top flight Basketball back to Helsinki and are competing in a Korisliiga season for the first time. However, they could not stop Kauhajoki from riding into town and leaving with the win. It was going so well for the hosts during the opening exchanges as they raced into a 17-13 lead after the first quarter and extended it to 33-25 at the long break. It looked like a maiden victory was in store for the Seagulls, but Kauhajoki had other plans and paced by the 20 points/13 boards double-double from Greg Mangano, the visitors carved their way back into the game. They won the third 19-27 and the fourth 15-20 to win the game as the Helsinki team collapsed and went patchy from distance, converting just 3 from 21 attempts (14%) behind the arc.

KTP Basket Kotka vs. Salon Vilpas Vikings, 81-74
Kotka registered its first win of the season by downing Vilpas at home in Round 1. The team used a very good first quarter to pace the victory, and during the ten minutes they put the Vikings to the sword to win the frame 26-16. That double digit lead from the opening stint was reduced in the second quarter, but Vilpas could only cut it by one point, winning Q2 17-18 to put the score on 43- 34 at halftime. The visitors closed the deficit further in the third quarter, taking the period 20-23 to make the final stanza interesting, but ultimately that first quarter cushion saved the hosts as they held on to the lead and claimed the win. Kenneth Simms set the tone in the winning effort, adding a double-double to the cause that consisted of 23 points and 10 rebounds.

Nilan Bisons Loimaa vs. Kouvot Kouvola, 93-79
The Bisons picked up the third home win of the 2014/2015 Finnish Korisliiga Round 1 by easing past Kouvot at home, but they needed a big second half to do it. The game started in a high octane fashion and it rained buckets through the first quarter as the teams went toe to toe on the scoreboard. After ten minutes the score read 24-25 in favour of the visitors. Kouvot added to their lead during another high scoring period in the second, scoring 25 points again to hold a 47-50 advantage at the midway buzzer. The hosts started the third in better touch and managed to edge another close frame to win the stint 20-18, the score now stood at 67-68 with ten minutes to play. Loimaa went hot in defence during the fourth quarter, restricting Kouvot to 11 points while pouring in 26 at the other end… that put some gloss on the final score for sure.