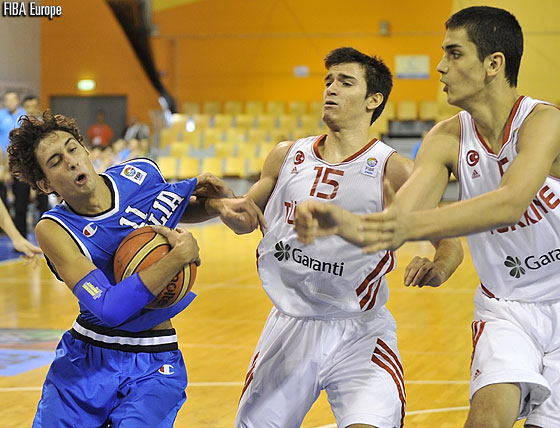 France, Latvia, Spain and Turkey advanced into the semi-final of the FIBA U16 European championships and will now contest the last four on Friday.

Latvia vs. Germany, 53-39
Host nation Latvia booked its place in the FIBA U16 European Championships semis with a low scoring success over Germany in Riga. The Latvians looked strong defensively, cutting off Germany at the perimeter and restricting them to just 14 points in the paint, an area where the Germans are considered strong. However, it was a largely disorganized game as nerves took hold and while Latvia took the win, they could never ease off the gas as Germany maintained a threat during the 40 minutes.

Nothing could separate the teams during the first frame as both sets of players jostled to take hold of the game, but after 10 minutes the score was locked at 11 apiece. The hosts finally found some breathing room during a more energetic second quarter, while Germany continued to look sloppy with the ball in hand. At the long break buzzer the Latvians had opened a 26-22 lead. The third quarter was huge as Germany failed to hit consistent buckets, only scoring 4 points throughout the term while Latvia poured in 17. The scoreboard read 43-26 after thirty minutes and while Germany always kept in touch by winning the stanza, the Latvians had too much down the stretch.

In a low scoring game, Arturs Strautins scored 11 and Roberts Blumbergs scored 10 for the winners.

Serbia vs. Spain, 64-78
In a repeat of last year’s final, Spain once again emerged victorious over Serbia to reach the final four of the competition. As the most successful team in the tournaments history and the standout performers so far this year (6-0 unbeaten until this game), Serbia would have felt confident about progressing. However, after an up and down game, Spain emerged victorious as they built success on impressive offensive rebounding, scoring 23 points from second chance boards.

Spain started the game well, efficiently dealing with Serbia in defence while offering sparks in attack, eventually leading 10-21 at the first break. Serbia finally found the touch that saw the team sweep the group stages and piled in 27 points through the second quarter. Spain could only muster 10 points in reply so it was the Serbs who led at halftime (37-31). A yo-yo game continued in the third quarter as it was Spain’s turn to go on the attack, pouring in 29 points while holding Serbia to 9 to lead 46-60 at the final split. The third quarter knocked the stuffing out of Serbia and the teams traded through Q4 as Spain took the spoils.

Pol Figueras had a big game for the Spanish with 17 points, 9 assists, and 4 rebounds, while Maxim Esteban grabbed 16 points.

Aleksandar Aranitovic was huge in the losing effort, taking a double-double of 32 points and 13 rebounds.

France vs. Bosnia, 82-52
France continued to impress as the country swept aside Bosnia to reach the semi-final of the U16 European Championships. The French are the only team remaining in the competition with an unblemished record and in this game made their solid roster count, with 23 points coming from the bench.

It was Bosnia and Herzegovina that started the game in better form though, outpacing France through the first quarter to lead 19-23 after ten minutes. The second quarter proved to be the turning point of the game as France found another gear to win the 10 minute stint 24-12, enough to hold a 43-35 lead at halftime. Les Bleus turned the screw in the third frame and once again sent consistent buckets crashing through the net. After 30 minutes on the court, France had extended the lead to 58-44 and were in cruise control. The jaunt to victory was not halted in the final act as the French won Q4 24-8 to demolish Bosnia and Herzegovina at the final buzzer.

Amar Gegic was the high scorer for Bosnia with 19 points.

Turkey vs. Italy, 82-73
Turkey booked its place in the next stage by defeating an Italian side that has started to run out of steam over recent games. The Italians struggled to get going in the first half and shot under a quarter from the field (24%), while Turkey put together an all-round solid performance that was enough to see them through to the semis.

The game started well for the Turks as they outpaced the Azzurri in the opening exchanges, leading to a 19-15 deficit at the first split. The gap widened significantly in the second stanza as Italy collapsed at both ends and Turkey took advantage with a massive 23-8 quarter. The lead at halftime was sitting 42-23 in Turkey’s favour, but Italy had a little more left in the tank. A huge third quarter effort saw the Azzurri win the frame 17-30 to cut the score to 59-53 after 30 minutes, but the frame took all the energy out of the team, so Turkey regrouped in the last quarter to seal the win.