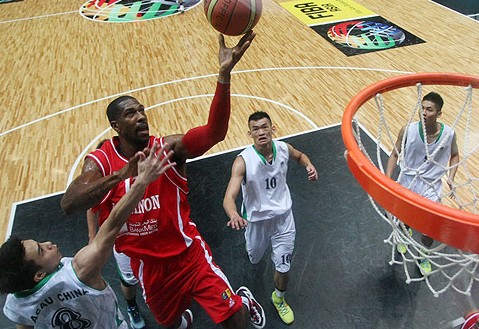 The 4th FIBA Asia Stankovic Cup tipped off today at 1130 local time in Tokyo (GMT +9), with the first game being between Lebanon and Macau. Coming is as the defending champions, Lebanon wanted to get off to a quick start and got a very inexperienced squad from Macau lined up against them in their first contest of the tournament. Having traveled six time zones to get to Tokyo, Lebanon’s coach commented that his guys still haven’t fully adjusted to the difference, but they are feeling better.

“We are finding our rhythm,” said Lebanon coach Ghassan Sarkis.

“A win is a win. And we need to get these games out of the way as quickly as we can. I am happy to start with a win,” he added.

Lebanon trailed after a minute of play and never trailed again.

Next up for the defending champs will be Philippines and Uzbekistan for Macau.

The second game pitted Iran against India in a much closer contest that saw Iran come out on top 83-71.

India took advantage of very poor shooting by the Iranian squad and were able to traded baskets for the better part of the first half. Iran held one-point advantage with 43 seconds and then they ran off five straight points to close out the quarter with a 23-17 margin. India built up a six-point gap twice during the second quarter, only to have Iran start finding the bottom of the net and outscoring the Indians 13-4 in the closing minutes of the half to take a 40-37 lead into the halftime break.

Iran put some space between them in the first half of the third quarter going on a 17-6 run, but India managed to pull back to within six points at the end of the third quarter. The main difference in the game was the hustle of Iran after loose balls and India watching balls drop and not going after them. Iran was able to get numerous second and third shots.

India didn’t score in the first two and a half minutes of the final stanza, while Iran built up a 12 point margin. With 3:07 the advantage had grown to 16 points, but then India mounted an effort to come back, going on a 6-0 run, but they couldn’t get the gap to less than nine, ultimately falling 83-71.
Iran didn’t help their cause with continued shots outside the arc, shooting 2 for 22 (9%) from three-point land. Likewise, India’s connection rate inside the paint was low, but they pushed the ball inside more and got more high-percentage shots. The stat of the game was Iran’s 24 points off turnovers to 14 for India…

As the final two games are completed, we’ll add their results