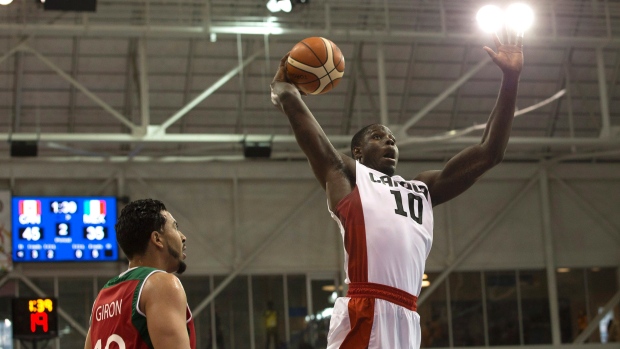 Canada secured a spot in the 12-team FIBA AmeriCup 2022 tournament by beating the U.S. Virgin Islands 95-90 on Saturday in San Juan, Puerto Rico.

With the victory, Canada raised its record to 3-1 in Group C phase play.

Anthony Bennett, the No. 1 pick in the 2013 NBA Draft, led Canada with 30 points and  Kaza Kajami-Keane poured in 27 and dished out nine assists.

Canada coach Gordie Herbert’s team didn’t have much preparation time together in the run-up to its first game of the week, holding just one practice. But they pulled together for a 95-93 win over the U.S. Virgin Islands on Wednesday.

“Give our players a lot of credit. They faced a lot of adversity and showed a lot of mental toughness dealing with it,” Herbert said.

After the FIBA AmeriCup qualifier, Kajami-Keane gushed about Hodge’s skills as a player, according to The Canadian Press.

“Walter Hodge is one of the greatest players I’ve played against in my career so far,” Kajami-Keane said.

In the FIBA AmeriCup 2022 qualifier, Bennett was a force to be reckoned with on offense. He made 7 of 9 shots from the field, including 3 of 5 from beyond the 3-poit arc. He snared nine rebounds at Coliseo Roberto Clemente.

Teammate Johnny Berhanemeskel went 3-for-3 from long range in a 10-point outing. He drained two 3s in the decisive fourth quarter.

Herbert noted that Berhanemeskel made a profound impact on the game.

“A kid who hadn’t played for 34 minutes, did not dress for the first game, came in and made three threes,” Herbert told reporters. “Those were huge plays for us.”

In another FIBA AmeriCup 2022 qualifier on Saturday, the United States hammered Mexico 96-75 in a Group D phase play game.

RaShad James had a team-best 21 points for the U.S. Edgar Garibay led Mexico with 19.

The United States won the most recent FIBA AmeriCup championship, which was held in 2017.

The United States improved to 6-0. Mexico fell to 2-4. Both teams have qualified for the 2022 tourney.