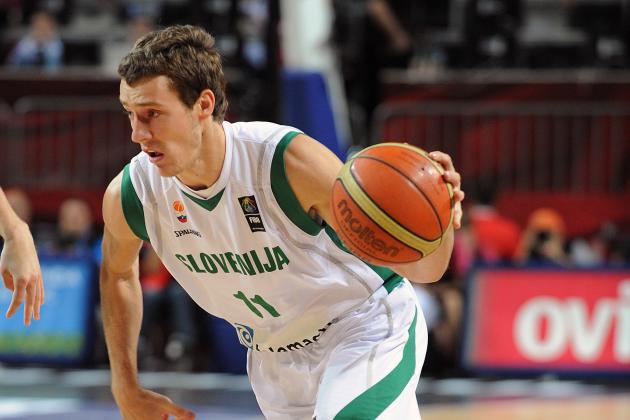 After a frenetic night of Basketball action around Europe, we now know the participant nations for next year’s FIBA 2015 Eurobasket tournament. There was plenty of drama along the way as teams fought it out on the court, while others cruised through to the tournament.

Group A
Iceland will play in a European Championships for the first time despite losing 70-78 to Bosnia and Herzegovina at home. Both teams progress to next summer’s tournament as Bosnia had already booked its place as group winners. The visitors set about Iceland in the first quarter to take a commanding 16-24 lead, but the hosts responded with a 31-19 second stanza to lead 47-43 at halftime. Bosnia won the third quarter 11-15 to tie the game after 30 minutes before blitzing Iceland 12-20 in the fourth to claim the win to finish the group undefeated.

Group B
Israel progressed to the FIBA 2015 Eurobasket as Group B winners even though the team lost 61-69 to a spirited Bulgaria. It was too little too late for the Bulgarians though as they lost five consecutively before this game and will miss out on the showpiece event. Israel looked in command as the hosts paced to a 19-16 first and 22-12 second to lead 41-28 at the long break. Bulgaria showed spirit in the second half as the visitors won the third stanza 11-17 and romped down the straight with a 9-24 last quarter.

The Netherlands joined Israel at the main tournament after defeating Montenegro 68-55 in a qualification decider. Montenegro travelled to Leiden in Holland and took the first quarter 17-18 and then backed it up in the second to lead 30-33. With the Dutch qualification hopes slipping the hosts put on a massive third quarter that proved to be decisive in the contest, winning the ten minutes 20-5 before winning the fourth 18-17 to seal the success.

Group C
Germany demolished Luxembourg on the final day of the qualification stage for the FIBA 2015 Eurobasket tournament. The Germans let the ShowTime come down on the road to win 66-118 to book a place in the tournament next year. The game was close through the first 20 minutes with the teams trading quarters, but the Germans led 40-43 at halftime. After the break the visitors exploded and run Luxembourg ragged, pouring in 36 points in the third and 39 in the fourth while holding the hosts to 26 points through the whole half. It was destruction on the court as Germany won the game.

Poland needed overtime to see off Austria 90-85 and progress to the European Championships as winner of Group C, while Austria missed out after Germany’s victory. Austria looked the better team in the first quarter, winning the 10 minutes 15-22. The hosts responded in the second frame to win it 24-18 for a halftime score of 39-40. The tight encounter continued in Q3 as Poland claimed the stanza 19-16 to lead 58-56 with ten minutes left of regulation. A 23-25 fourth quarter saw Austria tie the game after 40 minutes, but in the extra period the Poles had one last gear and won the game.

Group D
Belgium topped Group D with a 5-1 record after travelling to eliminated Denmark and coming away with a 63-77 win. The visitors set the early pace during a touch and go first quarter, emerging at the first split with a 15-18 advantage. Denmark replied in the second to win the frame 17-16, putting the scoreboard on 32-34 at halftime. Belgium found some extra breathing room in the third, extending the lead to six points after 30 minutes (50-56). The Belgians made it a formality down the stretch, winning the final period 13-21.

Right with Belgium on 5-1 and also qualifying to the FIBA 2015 EuroBasket is Macedonia, after the company picked up a 72-66 home win over Belarus. The hosts set a strong rhythm in the first stanza and commanded the ball to take a 26-17 lead after the first ten minutes. In Q2 Belarus scored 17 points again while holding the home team to 14 points, but it was Macedonia who held the halftime lead at 40-34. The third quarter proved pivotal as the hosts won 17-9 to open a sizeable lead, and although the visitors won the fourth 15-23 it was not enough to snatch the win.

Group E
Hungary completed half of its task by beating the Czech Republic 83-68 at home, but did not pick up the 17 point win needed to progress to next year’s tournament. The Czechs will now head to the competition that has yet to have a host nation decided. Hungary led from the opening tip off and carved out a 20-13 lead at the first break, but by the long break the visitors had cut the deficit to one point, with Hungary holding a 32-31 lead. The home team went in the hunt of the 17 point deficit needed to progress and a 26-19 and 25-18 third and fourth put Hungary mighty close. However, just one score short, the team crashed out as the Czech Republic moved on.

Georgia completed the three way tie at the top of Group E and progressed with a 71-59 home victory over the eliminated Portugal. The Georgians took the first quarter 22-15 to hold early command of the contest, but Portugal found its best Basketball of the game to win the second quarter 14-16. Georgia held a 36-31 lead at the start of the third and extended through the second half winning Q3 16-14 and the final frame 19-14 to record a comfortable win.

Group F
Latvia joined Bosnia and Herzegovina as the only undefeated team at this stage, sweeping Group F with a 6-0 record. The latest team to fall to the Latvians was Romania, who slipped 70-82 at home but still qualified for the tournament. A relatively close fought first half saw Latvia win Q1 by 16-22 and Romania respond in the second period 21-15 to put the score at 37-37 as the midway buzzer sounded. The third quarter proved pivotal as Latvia poured in 27 points and held Romania to 18, enough to let the visitors ease through the final stanza.

Sweden ended its ultimately failed qualification attempt on a high by defeating the also eliminated Slovakia 83-77 on home soil. The hosts looked good at the first split after winning the ten minute stint 22-16, but Slovakia came screaming back in the second quarter to lead 39-40 at halftime. Sweden found more consistency under the bucket in the third and won the frame 20-15, while outlasting Slovakia 24-22 in a high octane final period.

Group G
Italy defeated Switzerland 65-80 for an easy road win, progressing to the tournament at the top of Group G and bringing Russia along too. The Azzurri never looked unduly troubled and won the first quarter 15-28 and the second 14-20 to lead 49-48 at the midway point. That 19 point cushion was plenty for the Italians as they eased through the second quarter, even allowing Switzerland to win the fourth quarter 21-13.