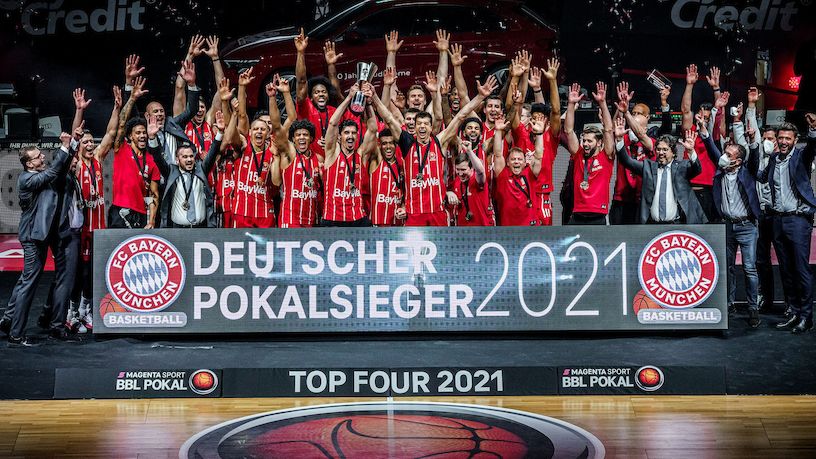 FC Bayern Munich rebounded from a slow start en route to an 85-79 victory over ALBA Berlin in the German Cup final on Sunday.

The tournament champions trailed 29-17 after the opening quarter, but flipped the script in the second period.

As a result, FC Bayern Munich took a 41-39 edge into the halftime break.

The road to the German Cup final

ALBA Berlin triumphed 112-96 in its semifinal showdown with BG Göttingen.

FC Bayern Munich sank 29 of 36 free throws, including Lucic’s team-best 7-for-7 at the Audi Dome.

And how did ALBA Berlin fare at the foul line? The runner-up squad made 15 of 23.

After suffering a 100-62 loss to ALBA Berlin in the German Bundesliga on April 26, FC Bayern Munich relished the sweet taste of victory in the Cup finale.

FC Bayern Munich coach Andrea Trinchieri surprised nobody by summing up his team’s play this way: “Today it was a great performance from the whole team. We played 50 minutes yesterday, but wanted the title so much.”

Trinchieri credited his players for maintaining their poise despite a disappointing start.

“Berlin scored everything in the first seven minutes. But we did not fall apart,” the coach commented. “We then put ourselves in the only possible position to win the game. With solid defense, great fight and a lot of effort.”

Reflecting on the loss in the tournament title game, ALBA Berlin veteran swingman Niels Giffey said, “It was extremely frustrating for us. We didn’t quite manage to put our stamp on the game. … We tried to push in the end, maybe we should have done it more.”

He went on: “We were in the game and found our rhythm early on. Munich then turned it into a half-court game. We like the faster game better. We found ourselves in one-on-ones too much and dribbled too much. It’s extremely bitter.”