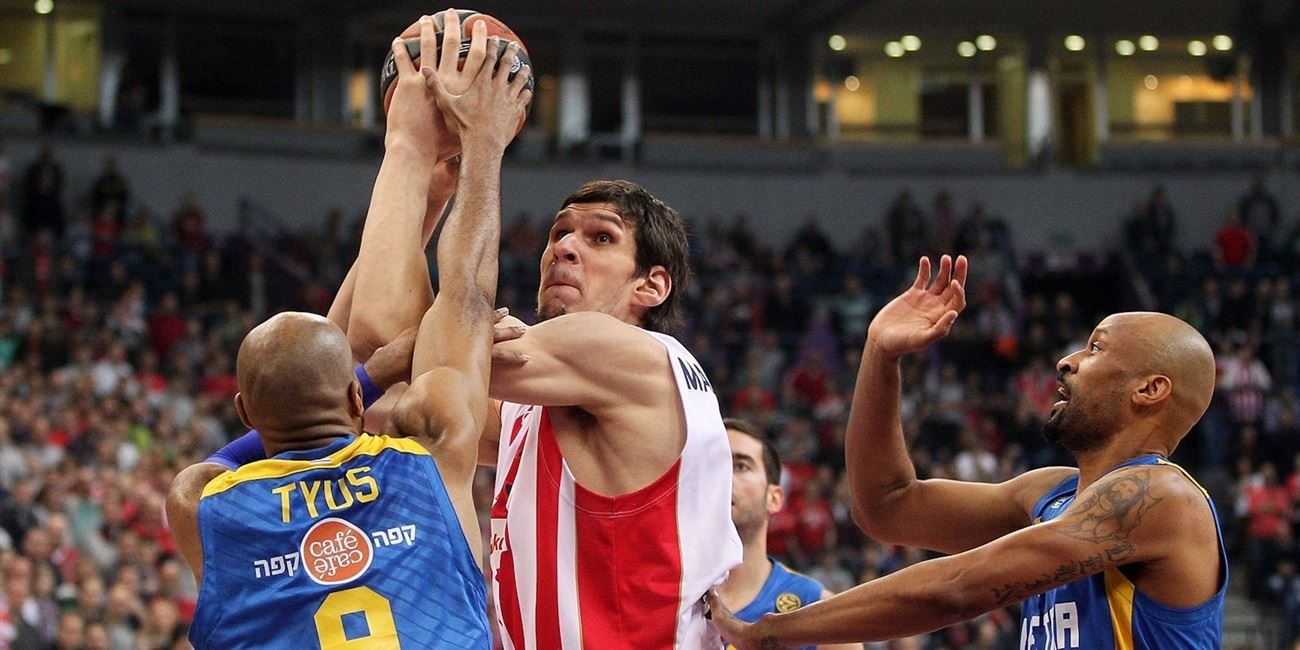 The Euroleague Top 16 reached Round 9 on Thursday with five games kicking off the action around the continent. Group E had three games, while there were two contests in Group F, and as always the Basketball was of the highest quality as the best teams from around Europe fight to make it to the Play-Offs.

Qualification is not assured for any club, but some took another big step in their Euroleague Top 16 campaigns. Barcelona continued to claw its way back to form with a confidence boosting road win over Greek powerhouse Panathinaikos Athens. The other games in Group E brought shock results, with ALBA Berlin keeping itself in the mix with a home win and Crvena Zvezda Belgrade keeping its hopes alive with a huge win over the current champs. In Group F, Fenerbahce and CSKA Moscow continued their push at the top of the table with cruising wins.

Group E
Crvena Zvezda Belgrade vs. Maccabi Tel Aviv, 89-76
The shock of Thursday’s action undoubtedly came in the Serbian capital as Red Star defeated current Euroleague champions Maccabi Tel Aviv. Yes, the Serbian powerhouse had home court advantage, but with wins hard to come by in the Top 16 and the Israeli giants visiting, a Tel-Aviv win was expected.

Crvena Zvezda confounded those expectations with an important win that sends the club to 2-7 in the standings, still last however. As for Maccabi Electra Tel Aviv, the club holds onto second place with a 6-3 record. The Israeli club was actually leading through thirty minutes, with a 54-59 lead, but Crvena Zvezda roared back into contention with a 20-0 run in the fourth to steal the game in style. Boban Marjanovic had a stunning game with 19 points and career-high 17 rebounds for the winners.

Panathinaikos Athens vs. FC Barcelona, 77-81
Barcelona continues to put its patchy early Euroleague Top 16 form behind it with a big win over Panathinaikos in the Greek capital. Both clubs entered the game on 5-3 records, but Barca cleared The Greens to tie with Maccabi Tel Aviv on 6-3 in the race for second in Group E, while Panathinaikos now holds fourth with a 5-4 record.

The hosts looked comfortable through the first quarter with a 21-16 run, but Barcelona exploded with an 11-26 second period and never looked back, managing to hold off a fight back from the Greek contingent in the second half. Justin Doellman topped the scoring for Barcelona with 21 points, while Juan Carlos Navarro rolled back the years with 17 points.

ALBA Berlin vs. Zalgiris Kaunas, 80-72
ALBA Berlin has breathed new life into its campaign in recent weeks and the German club bounced back from a loss last week to down Zalgiris in Berlin. The win set ALBA alone in fifth place with a 4-5 record, out of the qualification places yes, but firmly in the mix. As for Zalgiris, the Lithuanians continue to labour through the group, but still have a chance from 3-6.

Reggie Redding was the driving force for the Germans with 27 points, no teammate even made half that amount of points. In a complete performance, Redding also added 7 boards and 5 assists.

Fenerbahce Ulker Istanbul vs. Nizhny Novgorod, 92-79
After defeating CSKA Moscow last week, Fenerbahce played Russian opponents again and eased past Nizhny Novgorod in Istanbul. The hosts went big in the second quarter with a 32-17 run that made it 50-34 through halftime. Credit should go to Nizhny for making a game of it, but Fener controlled the hardwood to win the game in a comfortable second half. The win sent the hosts to 7-2 in the standings, one foot firmly in the playoffs, while Nizhny dropped to seventh with a 2-7 record.

Laboral Kutxa Vitoria vs. CSKA Moscow, 74-81
These clubs had contrasting weeks in Round 8, CSKA losing at home to Fenerbahce and Laboral Kutxa downing Anadolu Efes in an impressive road win. However, CSKA resumed normal winning service on Thursday with an important away win to get the team back on track. The visitors moved to 7-2 in a share of second place in Group F, while the Spanish hosts stayed in fifth place with a 4-5 record.

There were alarm bells on the CSKA bench after 10 minutes as Vitoria had blitzed the Russian giant with a 27-15 run. The Moscow club settled after that and eased through the remaining stanzas to win the game, even making it comfortable down the final straight. Vitaly Fridzon topped CSKA with 13 points, but the star performer was Laboral Kutxa’s Darius Adams with 31 points.