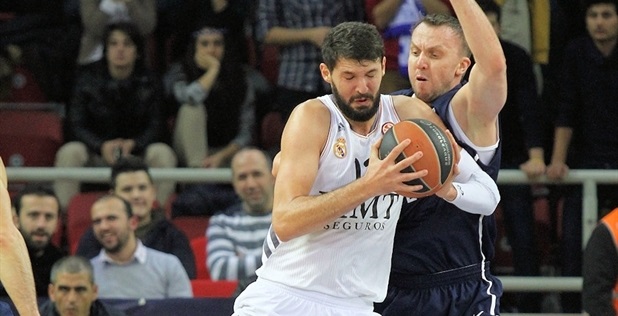 It has been another Regular Season of fantastic Euroleague action and with Week 10 now underway there is only Friday left until we turn our attention to the Last 16.

There were eight games on Thursday with plenty of business to be taken care of as the final five positions for the Last 16 of the Euroleague were decided. In Group A Partizan NIS Belgrade slipped to a home defeat against CSKA Moscow but still found a way into the next round thanks to Nanterre´s loss at home to Fenerbahce.

Zalgiris advanced to the next phase with a vital road win over Brose Baskets in Group B and Turkish club Efes followed despite a loss at the hands of all-conquering Real Madrid. Unicaja Malaga took it to the wire away to Montepaschi to secure passage from Group C and was joined by Bayern Munich despite the German team not playing until Friday.

Partizan sneaked through to the Last 16 after slipping to defeat against Russian giant CSKA Moscow. The Serbian powerhouse finished 4th in Group with a 3-7 showing and progresses ahead of Nanterre thanks to the French clubs loss to Fenerbahce on Thursday. CSKA closes the Regular season with a win to go 7-3 in third position in Group A.

CSKA was in charge throughout the game and never relinquished the lead, managing to win every quarter. The visitors started well, but Partizan offered a stern test in the first 10 minutes to put the score at 19-20 after the first period. CSKA opened the deficit in the second quarter to make things more comfortable and to head in at halftime winning 36-43. The Russian team kept a winning mentality during minutes 20 to 30 and outscored the hosts again to lead 49-59 after three quarters of the game. With the game sewn up Moscow completed a routine road win in the 4th to end a successful Regular Season.

Dragan Milosavljevic grabbed a game high 17 points in the losing effort and was backed up by Joffrey Lauvergne with 11, Dejan Musli 11, and Bogdan Bogdanovic 10.

Real Madrid put on another top class showing in the Euroleague on Thursday to maintain the club´s perfect record in the Regular Season. Los Blancos defeated Efes on the road, but the Turkish club progressed to the Last 32 anyway with a 4-6 record in fourth place. Madrid´s win also ensured that Zalgiris Kaunas would progress to the next stage too, regardless of the Lithuanian team´s win over Brose Baskets Bamberg.

Real Madrid has been in fantastic form and claims Group B with a 10-0 record, becoming the team to beat in this season´s Euroleague competition. The home team started the game in good touch and restricted Madrid´s attacking prowess to snatch the first quarter 20-18. In the second period the Spanish visitors began to turn the screw and stole a lead in the game that was maintained until halftime, with Los Blancos leading 34-38 heading into the locker rooms. The game remained tight throughout the third quarter as Efes looked for a win that would guarantee qualification to the Last 32. However, Madrid managed to remain in front and led 49-54 after thirty minutes of the game. In the last stanza the away team found another gear and secured a comfortable win with a fantastic 0-17 run.

Sergio Rodriguez picked up 24 points thanks to 6 out of 6 from range, while he also laid five assists. Nikola Mirotic added 17 for Madrid and Felipe Reyes scored 13 and also picked up 10 rebounds for a double-double.

Unicaja Malaga left it to literally the last second of the Euroleague Regular Season to book a place in the next stage of the competition. The Spanish club has suffered patchy form in recent weeks but managed to overcome Italian champs Montepaschi Siena to progress. Malaga´s win put the team third in Group C with a 5-5 record and also sent through German club Bayern Munich before the team takes to the court tomorrow.

A tense first quarter saw both teams struggle to find the hoop in the early exchanges, but both recovered for Malaga to take a low scoring first quarter 12-15. In the second period Malaga shored up at the back and stopped the home team from finding consistent baskets to take control of the game. The visitors kept a solid scoring rhythm to take a 22-32 advantage into halftime. Montepaschi kept missing plenty of three point efforts but slowly the Italian team started carving that five point midway deficit to put the scoreboard at 38-42 after half an hour. Siena kept chipping away until the fourth became very tight, with both teams trading the lead and struggling to dominate in the game. The game was tied at 62-62 with just 3.9 seconds on the clock, but with the game heading to overtime Malaga found a basket on the buzzer to take the win and a place in the Last 32.

Nik Caner-Medley was the high scorer for the winning team with 20 points, while Granger and Earl Calloway each added 13 for the Spanish team.

Othello Hunter and Josh Carter paced Montepaschi with 14 points each with Eric Green adding 12 for the Italian club.