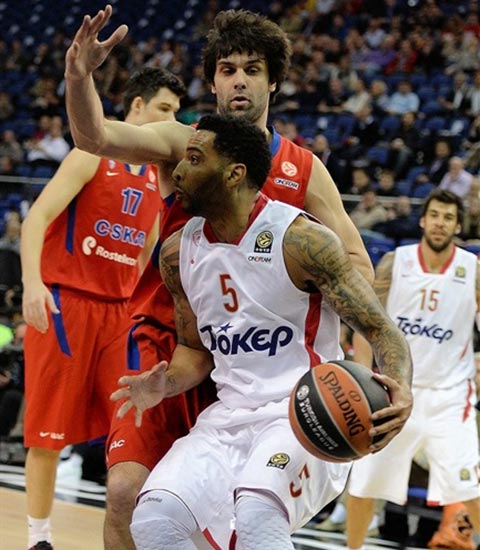 Regal’s Alejandro Abrines sets to dish inside or drive on Madrid’s Jaycee Carroll.

The much anticipated Euroleague Final Four got underway Friday at the O2 Arena in London with Semifinal match-ups that pitted 2012 finalists Olympiacos against CSKA Moscow, and a Spanish Derby between FC Barcelona Regal and Real Madrid. In the first game, Olympiacos got out quick and left no doubt as to which club was best suited for the finals as they pounded the Russian powerhouse 69:52 to grab the first spot in the Finals. In Game 2, Real Madrid put together a 17:2 run late in the fourth quarter to earn the second spot in the Finals with a 74:67 win over their Spanish rivals.

The finals will be played on Sunday at 21:00 CET while the third place contest will take place at 18:00 CET. The last time Real Madrid has in the Euroleague finals was the 1994-95 season when they won the title with a 73:61 win over Olympiacos. Even so, the men from Madrid hold the distinction as having won the most Euroleague titles over the years with eight. They’ve also been runner-up six times. Olympiacos has won the title twice, in 1997 and last season (2012), while coming up short three seasons, 1994, 1995, and 2010.

Olympiacos – CSKA Moscow, 69:52
Pero Antic may have said it best:

Last season we won only in the last second, but this season it was a totally different story. But it doesn’t matter. In the Final Four the key is to get a win. By a point or by 20. I don’t know what people expected from the game, but we gave a good show today. If I’m a fan of basketball who bought a ticket to the Final Four I cannot be disappointed from what we showed today.
–Pero Antic, Olympiacos Piraeus

2012-13 Euroleague MVP Vassilis Spanoulis gets two in the paint against CSKA in the Quarterfinals.

Olympiacos showed up having peaked at the right time of the season and dominated CSKA from the start to earn a spot in the finals on Sunday against the other semifinal winner, Real Madrid. The story of the game was defense and poor shooting from the line, CSKA could only manage to shoot 7 of 21 (33.3%) inside the arc and connected on only 17 of 30 (56.7%) at the stripe. On the other side of the court, the Reds hit 20 of 41 (48.8%) and 14 of 17 (82.4%) from the line. They also outrebounded the Russian club 41-29.

The first quarter opened with the clubs exchanging baskets and the lead, until the Reds closed out the frame dropping in the final eight points to take a 24:17 advantage into the second 10.

Mid-way through the second frame Kyle Hines sank a pair of singles, Antic dropped in a jumper and Acie Law connected on a lay-up to give the Reds a 12 point lead, 35:23. Sasha Kaun threw down a dunk and then hit a lay-up shortly after to account for all the field goals CSKA would get in the second half of the second quarter. Neither team scored in the last two and a half minutes of the half, until Victor Khryapa split a pair of free throws for the Russian club to send the game to the mid-game break with Olympiacos up 40:28.

Euroleague 2012-13 MVP Vassilis Spanoulis tallied the first points of the second half driving through CSKA’s defense for a lay-up, and nearly two minutes later team mate Kostas Papanikolaou sliced the cords with a three-ball to give the Reds their biggest lead of the game thus far at 17, 45:28. CSKA got the next six points off free throws, two sets from Sonny Weems and then a pair from Kaun to cut the gap to 11, 45:34. Neither team would tally any points for nearly three minutes, then Hines hit a deuce and Antic knocked down a long-ball to get their lead back to 16. Antic split a pair of free throws to close out scoring in the first 30 with Olympiacos up 53:36.

The defending champs’ advantage swelled to 21 with two fast break lay-ups nearly two minutes into the fourth quarter, giving the Greek club a 57:36 lead. After a Milos Teodosic triple at the mid-point of the fourth that cut the lead to 15, 62:47, the clubs found the lids on the baskets for two minutes, with the next six points coming from free throws and the next field goal not coming for four minutes. The next CSKA field goal came at the hands of Vladimir Micov, who sank a triple with time expiring on the Russian club’s season.

Between the two teams only four players scored in double figures, with three of them tallying 13. The Reds had a fairly balanced score sheet with nine players contributing, all with five or more points.

Hines and Antic led the way for Olympiacos with 13, with Hines picking up MVP of the game honors for his double/double that included 10 rebounds.

CSKA Moscow got 13 from Weems and 11 from Khryapa.

They had to travel to London for the next installment of the decades old rivalry and the clubs from didn’t disappoint the fans that showed up at the O2. They battled into the fourth, when Regal took control and then Madrid used a 17:2 run through the heart of the quarter to put the game away and move into the finals against Olympiacos. Felipe Reyes led Madrid with 17 and Marcelinho Huertas was high-man for Regal with 19.

Barcelona took the early lead, getting up with free throws and jumpers to extend their lead to 11:18 after the first 10.

Real Madrid opened the second with a triple from Sergio Llull, followed by a driving lay-up by Marko Todorovic on the other end of the court. Felipe Reyes dropped in a lay-up and Llull sank a triple to pull Madrid to within one at 19:20. Juan Carlos Navarro countered with a three-ball and then Llull knocked down his second in under 60 seconds. After trading lay-ups, Regal’s Tomic split a pair of free throws to get up by two, then Sergio Rodriguez connected on a triple to give Madrid their first lead of the game at 27:26. After a three-point play by Tomic, Madrid outscored Regal 12:4 to head into the break up 39:33.

It took over two minutes before Mirza Bergic’s dunk was the first points of the second half, then Regal took less than a minute to run off seven unanswered to pull to within one at 41:40. They traded baskets over the next few minutes and then Regal ran off 12 straight starting near the end of the third, running into the early part of the fourth to put Barcelona up 48:56. Shortly after Joe Ingles knocked down a three-ball to extend their lead to nine, 52:61. Reyes hit the next five to start a 17:2 run that put Madrid up 69:63. Huertas connected on a pair of singles to break the drought for Barcelona and cut the lead to five with just over a minute to play. The last five points that Madrid would tally came from the line, while Regal would only manage one fast break lay-up, giving Madrid the win and their first return to the Euroleague Finals in nearly 20 years.

Barcelona put up a big fight, but we got the win eventually, and that’s what matters right now. What made the difference for me was the second half. We played a lot of zone defense and that’s how we came back to the game. Our intensity helped too. We had to find energy to come back like that in the closing quarter. It’s the first title game for Real for many years, and I’m very happy I returned to the Euroleague and this is what I experience already in the first season. We have less experience than Olympiacos because they won the title last season and managed to keep a lot of players on the roster, but we still have very good players who can step up and win the game. We want our fans to celebrate on Sunday night. The whole season is on the line.
— Rudy Fernandez

Barcelona got a game-high 19 points from Huertas and a double/double from Tomic who sank 18 points and hauled in 12 rebounds.