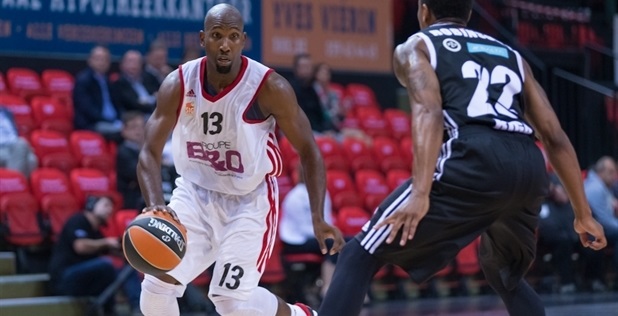 The Euroleague Qualifying tournament got underway today in Ostend, Belgium, as eight clubs from around the continent push for one place in this season’s Euroleague Regular Season. The do-or-die contests started with two French club prevailing in their respective games to progress to the next stage of the competition.

VEF Riga vs. Strasbourg, 53-82
Latvian champions VEF Riga could not get their game together and were swamped by French club Strasbourg, who are looking for their second consecutive season in Europe’s elite club competition. The reward for victory is a contest with French rival ASVEL Lyon Villeurbanne, who overcame tournament hosts Telenet Ostend in Tuesday’s other game.

The French outfit raced into the lead with an early 0-9 run built on triples from Louis Campbell and Anthony Dobbins, before Gerald Robinson registered the first points for Riga (2-9). Kevin Dillard picked up a couple of buckets, but Strasbourg had early control and looked good at 8-16 as the quarter stretched through the middle minutes. However, Dillard was pacing the Latvians early on and was helped by Arturs Berzins avoided the zone from downtown and Bamba Fall took two dunks, enough to put Riga back in the game as the first split arrived (19-22).

Janis Timma continued VEF Riga’s good run to open the second quarter and make it a one point game at 21-22, but it was not to last. Strasbourg’s defence started to tighten as the team collected 4 steals in quick succession that allowed Antoine Diot, Campbell and Dobbins to score, while Jeremy Leloup struck from beyond the arc to make it a double digit game. The Latvian powerhouse tried to recover but Leloup hit another triple and Campbell followed suit to make the deficit sit at 15 points (27-42). Riga responded with the final five points of the half, but at the long break trailed 32-42.

Strasbourg’s big men started to control the hardwood, taking command in both painted areas and dictating both offense and defence. The French team shut up at the back and shipped just 2 points during the opening four minutes of the third quarter, while scoring 7 at the other end (34-53). At one point in the third stanza Strasbourg opened a 20 point gap (36-56), this was extended as Riga collapsed, and after 30 minutes the French team was in complete control (42-65).

Strasbourg eased off the offensive basket in the fourth frame, but always maintained a solid defensive foundation to make sure the Latvians could not spring the comeback of the century. An 11-17 final frame in favour of the French team was enough to seal an emphatic win that saw them claim each quarter on the way to success.

Gerald Robinson scored 14 points, and Kevin Dillard had 12 in the losing team.

Telenet Ostend vs. ASVEL Lyon Villeurbanne, 77-86
Tournament hosts Telenet Ostend would have been hoping to give their fans something to shout about by going deep into the Euroleague Qualifying campaign. However, the club came up against a solid ASVEL Lyon performance that saw the French club progress to the next round where they will now play compatriots Strasbourg.

David Lighty got the scoreboard ticking by sending home his own missed effort to give ASVEL the first advantage, but Gregory Echenique logged for Ostend in the paint. An early J.P. Prince slam dunk pumped the crowd and the Belgian team roster, but Lyon kept pace in the early exchanges as the teams traded buckets for an 11-11 score. Taurean Green scored to put ASVEL 14-18 in front, but once again Echenique was proving a threat in the key and drew Ostend back into the game. However, Ahmad Nivins left the bench to score five points for the French team and at the end of the first quarter the score was 20-24.

Jared Berggren (basket plus foul) and Mateusz Ponitka gave the hosts the lead at the start of the second, and while ASVEL kept scoring, Ponitka nailed two buckets from downtown to give the Belgians a 33-28 lead. Edwin Jackson and Green got the baskets needed to put Lyon back on level terms at 35 apiece, but Ostend was on fire from the field as Guy Muya and Dusan Djordjevic both hit from beyond the arc. Once again the visitors came back and through 20 minutes the teams could not be separated, heading into the locker room locked at 43-43.

Amara Sy opened the third frame with three triples to stun the home team, and even though Ostend registered in the second half, Green compounded the misery with a jumper (45-52). Sy was on a hot streak and took one off the glass to open the first double digit lead of the game, handing the French team a 47-58 advantage. The Belgians were shaken, but Prince and Berggren continued to pace the team and reeled the deficit back to 5 points. Sy was still finding scores, while Ponitka hit a three point play to make it 56-62 at the final split.

Wes Wilkinson and Ponitka combined to give Ostend a good start to the fourth stanza, but Sy was now controlling the scoring and kept putting ASVEL back in front. The game was never comfortable for the French team, but they managed to ease down the stretch, keeping the home team at arm’s length to progress in the Euroleague Qualifying tournament.

There were plenty of high scorers in the ASVEL ranks, with Sy scoring 23 points and grabbing 10 rebounds for a game winning double-double. He was followed by Jackson with 20 points, Green with 17, and David Andersen with 13.