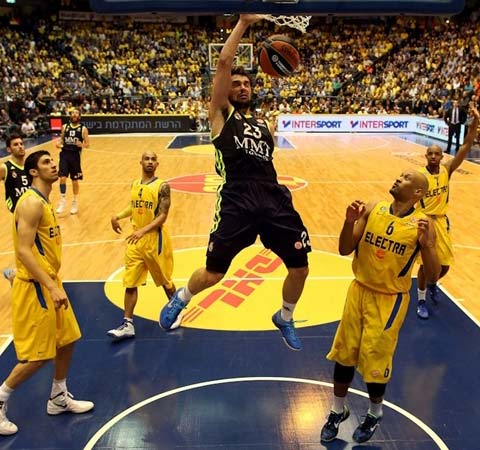 Euroleague: Madrid in, Panathinaikos up 2-1

Panathinaikos’ Roko Uric looks for a cutter to dump the ball to while Barça’s Nate Jawai stands wide and tall cutting down passing lanes.

As the 2012-13 Euroleague season progressed, one thing was fairly certain, FC Barcelona Regal was one of the favorites in each stage to advance to the next and to ultimately take home the Euroleague title. The finished 9-1 in the regular season and then 13-1 in the Top 16 round, then they had to square off with Panathinaikos Athens. In three thrillers thus far, the total margin of victory has been five points, the first ended in overtime with Barça on top 72:70 at home, the second went to the Greens in Barcelona, 65:66, and on Tuesday, Panathinaikos took a 2-1 advantage with another heart-stopper, this time in Athens, but again only one basket difference with a 65:63 decision going the home club’s way. Game 4 will be played in Athens on Thursday, April 18.

In the other semifinal contest of the night, the Real Madrid contingent started making arrangements for the Final Four at the O2 in London with another sound win over Maccabi Electra, 57:69, in Tel Aviv. Led by Jaycee Carroll’s 16 points, the men of Madrid took control of the second quarter and cruised to a 12-point win and the Final Four.

Maccabi Electra – Real Madrid, 57:69
After two solid wins in Madrid, the Real Madrid squad took their show on the road and headed to the Nokia Arena in Tel Aviv. In front of an estimated crowd of roughly 11,000, the home town club was handed their third and final defeat in the quarterfinals with a score of 57:69. The trip to London marks the fifth time Real Madrid has been in the Final Four since the format began during the 1987-88 season. FC Barcelona has been to 12 Final Fours, Panathinaikos and Maccabi Tel Aviv have been to 11, and CSKA Moscow has been in 10. Real Madrid holds the mark for the most Euroleague Championships and times being runners-up with 14 (8 wins, 6 as runner-up). The last time Madrid was in the Final Four was in 2011, the time prior to that was in 1995 which was also the last time that they were Euroleague Champions.

The two clubs had difficulty scoring early in the first frame until Regal went on a 2:9 run to bring the score to 5:14. The scoring drought for Electra continued until Shawn James scored on a three-point play, lay-up plus foul, and Ricky Hickman found an opening in the middle of the Madrid defense for a driving layup, cutting the margin to 10:14. Carroll picked up two of his team-high 16 points with a put-back that beat the 10 minute horn, giving Madrid a 10:16 early advantage.

The second frame made up for the lack of scoring in the first with some fast and furious scoring that brought Maccabi to within one, 24:25. Four unanswered by Madrid gave them some breathing room as time ran down on the half, but Hickman knocked down a triple which was followed up by Yogev Ohayon’s jumper to knot the contest at 30. Sergio Rodriquez beat the horn with a triple to send the clubs to their dressing rooms with the guests up 30:33.

The second half opened with the hosts looking inspired and picking up their first lead of the game at 40:38. They extended to 42:38, but Carroll countered with a triple and Serio Llull connected on two singles to put Madrid back up by one, 42:43. Five points later, Maccabi wanted to regroup with a time-out after a Madrid 0:10 run. James killed the run with a lay-up out of the timeout, but Madrid extended their lead to eight, 44:52 heading into the fourth.

In the final 10 it didn’t take the guests long to pull away and at 48:61 Maccabi wanted to talk things over again shortly before the stanza was half complete. The club’s traded triples for the rest of the way, keeping Maccabi from doing anything to the margin they had to make up and locking up the first semifinal seat for Real Madrid.

Carroll led the way for the winners with 16 points. Llull added 13 and Rodriguez contributed 12.

James was game-high for Electra with 18 points, also adding 6 rebounds. Hickman, Ohayon, and David Logan each dropped in 11 on the night for the hosts.

Panathinaikos Athens – FC Barcelona Regal, 65:63
The Greens ground out another tight win over Barcelona Regal, this time in front of their home crowd estimated at just under 18,000, to take a 2-1 lead in their best of five series. Panathinaikos used a 6:0 run to close out the game with the win, while Barça went scoreless in the last minute plus some.

The hosts set the tone early, jumping out to a huge 20:10 first quarter lead off the strength of a 12:2 run. For nearly seven minutes to open the contest the clubs found it a struggle to score and were knotted at eight when Jonas Maciulis dropped in a triple to start the scoring run. Dimitris Diamantidis, Panathinaikos’ go-to man, sank a pair of deuces and Stephane Lasme connected on a tip-in just before the buzzer.

The margin was extended to 15 with a 9:2 run to bring the score to 31:16. Regal got two jumpers from Erazem Lorbek to cut the lead to 11 then a couple of minutes later Sarunas Jasikevicius hit the cords with a triple, followed by a pair of singles by Juan Carlos Navarro and the gap was sliced to six, 33:27. Michael Bramos hit a three-pointer for the greens to push the lead back to nine, which is what the margin was when the half ended, 38:29.

Coming out of the dressing rooms after the intermission, Barça took control of the contest and went on a 4:14 run to take the lead mid-way through the third quarter, 42:43. Over the next three minutes they traded baskets and the lead, until Bramos dropped in a triple and Regal’s Ante Tomic found a hole in the defense and scored on a lay-up, knotting the score at 49. Alejandro Abrines connected on a lay-up and James Gist split a pair of free throws for the Greens to give Barcelona a one-point advantage, 50:51, heading into the final 10.

Barcelona stretched their lead to five early on, 50:55, but were countered by a 9:2 run by the Greens to bring the score to 59:57. C.J. Wallace and Jasikevicius knocked down consecutive triples to take back the lead, 59:63. Unfortunately for Barcelona, that would be the last time they’d find the bottom of the net, while Lasme shook the backboard with a thunderous dunk to get the crowd on it’s feet and fuel the comeback. Shortly after Maciulis stole the ball from Jasikevicius, dished it off to Diamantidis, who dropped in a triple off the glass to put the hosts up by one, 64:63.

The final minute of play was a comedy of errors for both clubs as Tomic came up empty on a pair of singles for Barça, Lasme then lost the ball for the Greens. Jasikevicius had a chance to give the guests the lead back with a jumper on the baseline, but came up empty. Gist nabbed the rebound and was fouled with 5.6 seconds on the clock. He could only connect on one of the two charity tosses, but did give Panathinaikos a two-point advantage. Navarro had trouble getting down the court and put up an off-balanced shot that came up short, giving the hosts a 2-1 lead in their series.