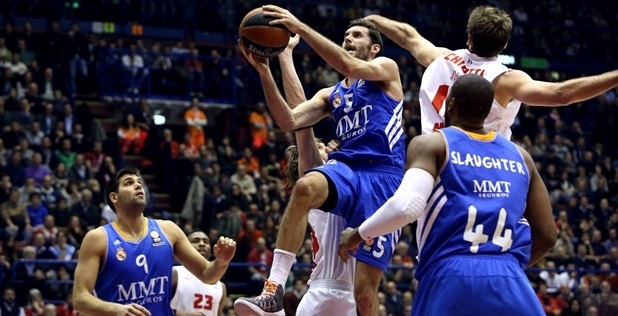 There are just two more games to go in the Euroleague Regular Season as Round 8 got underway on Thursday night with plenty of action around Europe. Teams secured positions as group winners while others merely survived to fight another week and there were even more places in the Last 16 claimed.

The basement clubs from Group A clashed on Thursday and the Serbian home team emerged victorious with a comfortable 76-61 score line. After a low scoring first quarter Partizan pulled away in the second to take a convincing 42-27 lead into halftime. After the break the hosts continued to dominate and held a commanding 59-37 advantage after 30 minutes of play. With a 21 point gap and the game assured Belgrade closed out an easy win in front of the fans at the Kombank Arena.

Bogdan Bogdanovic put in a barnstorming performance and collected 15 points, 10 assists, 6 rebounds and 5 steals to push Partizan to a victory that keeps their Last 16 hopes alive. The Serbian team sits in fifth place in Group A with a 2-6 record. Kiev is now on the verge of going out if Nanterre defeats Barcelona on Friday.

Real Madrid is playing arguably the best Basketball in Europe at the moment and the Spanish juggernauts showcased that again with a road win over Emporio Armani Milano. While not having things their own way, the Madrid team did control the game throughout and went into each split with a lead. Indeed Los Blancos led 19-23 after the first quarter, 34-48 at halftime, 46-63 after the third period, and 71-78 by the final buzzer.

Rudy Fernandez gave the winners a platform for success with 16 points, 5 rebounds and 3 assists, while Sergio Rodriguez added 10 points and Salah Mejri scored 10 with 7 rebounds and 4 blocks.

The win secured Madrid´s position as winners of Group B as the Spanish club moves to 8-0 this season. Despite a tough day at the office, Milano is still in the hunt for a Last 16 place with a 4-4 record in 3rd position.

Zalgiris Kaunas traveled to France and lost to Strasbourg, but the hosts needed a buzzer defying three pointer from Louis Campbell to get the job done.

With the teams locked at 18 apiece after 10 minutes, this was destined to be a close game, although the visitors opened up a 37-42 lead at halftime. Strasbourg reeled in the deficit in the third to take a 53-51 advantage into the final period of the game. Throughout the fourth the teams continued to be neck and neck and the game seemed destined for overtime with the scores at 74-74 with 36 second left. However, Zalgiris went 2 ahead with just 2.4 second remaining on the clock to apparently seal the deal, but with the buzzer sounding Campbell nailed a three to take the win for Strasbourg.

The loss keeps Zalgiris in 4th place now with a 3-5 record, while Strasbourg stays alive in the Euroleague despite being last in the standings with 2-6.

From seeming down and out just a few weeks ago, Italian champs Montepaschi Siena have turned the season around and on Thursday recorded a third win of the campaign. The club needed a last second miss from opponents Stelmet Gora to seal the victory, but nevertheless it was a win that takes Siena to fourth in Group C with a record of 3-5. Despite the loss and sitting last in the group, Gora is not out of sight and the club´s 2-6 record is still enough to be in contention for a Last 16 berth.

One club not worried about booking a Last 16 place is Galatasaray after the Turkish club claimed a home win against Malaga to progress to the next stage. The TBL club stays in second place in the group with 5-3 record, but all eyes will be on Malaga as the Spanish team has two games to turn its season around. The club drops to fifth after this defeat and now has a poor 3-5 record.

After a good start to the season Malaga has lost four of the last five so Galatasaray would have been confident of getting the job done at home. It proved to be a tough encounter though as the visitors recovered from losing the first quarter 19-16 to win both the second and the third. With the Spanish team winning 55-53 after 30 minutes of action Galatasaray found another gear in Q4 and outgunned Malaga down the straight to claim the win.

Carlos Arroyo once again demonstrated his credentials as one of the best players in the league with 22 points and 5 assists for Galatasaray. Carlos Suarez tabbed 16 points and 8 rebounds for Malaga.

The highest scoring game of the night came in Group C where Bayern Munich fell to current Euroleague champions Olympiacos in Germany. While Madrid lights up the competition, Olympiacos is also unbeaten and wins Group C with a current 8-0 record. Bayern Munich´s season has crumbled and the team has lost the last 4 Euroleague games, but the early form of the debutant has meant the club stays in contention in Group C with a 3-5 record in third.

Lokomotiv Kuban completed a great achievement last week by qualifying for the Last 16 at the first time of asking, and despite already making it to the next round the Russian club made a good go of things on the road against Tel-Aviv. However, the Israeli giant snatched victory despite squandering a 12 point lead in the fourth quarter to book a place in the Last 16 and also trade places with Kuban for first position in Group D.