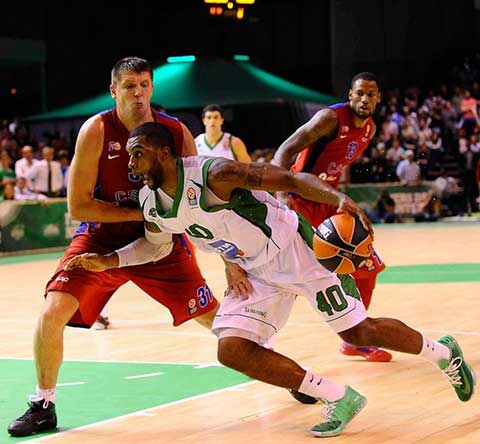 On Day 2 of Week 1 in Euroleague competition it was battles to the wire across the league as five of the seven matches came down to seven or fewer points, with four of those four or few points and one ending in OT. An interesting fact from Week 1 is that six of the nine games played have had 84 as one of the team’s scores, including all three home teams in Group D.

Is it time to panic in Tel Aviv? Maccabi Electra opened their 2013-14 Euroleague campaign on Thursday with a road trip to Laboral Kutxa and suffered their second opening day loss in a week, this time falling 84:80. After losing their first Israel Super League opening match in 23 years, to now lose in their Euroleague opener has to have some in the Electra camp a bit nervous.

In other matches Fenerbahce Ulker won on the road over Budivelnik Kiev, CSKA Moscow headed to France and picked up a win over French National champions JSF Nanterre, Barcelona earned a home win over Partizan, Anadolu Efes picked up where they left off last season and defeated Armani Milano, Lokomotiv Kuban beat Red Star on their home court, and Lietuvos Rytas stopped Panathinaikos in a thriller.

On Friday Week 1 will be complete as Zalgiris Kaunas hosts Real Madrid, Stelmet Zielona Gora takes on Bayern Munich at home, and Olympiacos opens their Euroleague title at home against Unicaja.

The guests got out the to early lead, taking the first frame 15:18, but Budivelnik countered in the second and took a 43:41 lead into the mid-game break. Kiev added three to their advantage in the third, outscoring Ulker 34:30 to head into the fourth up six, 77:71.

Ulker used scoring runs of 0:12 and 3:17 in the fourth quarter, while outscoring Budivelnik 7:31 to pick up their first win of the season and spoil the Euroleague debut of Kiev’s contingent.

JSF Nanterre – CSKA Moscow, 59:62
CSKA Moscow survived a thriller in Paris against JSF Nanterre, the reigning French National Champions. The contest came down the final seconds with Mam Jaiteh getting off a long-ball at the buzzer that would have tied the score, but he came up empty giving the Russian squad the win.

Nanterre built a nine-point lead over the first 10 with an 11:0 run to close out the quarter up 20:11. The lead peaked at 12, 24:12, then CSKA slowly chipped away, eventually getting to within four, but settling for a seven-point deficit, 35:28, at the half. The third quarter opened with a CSKA 0:10 run to put the guests up three, 35:38. They exchanged baskets for the rest of the frame with CSKA coming out up by two, 48:50. The fourth quarter was a battle that had Nanterre leading mid-way through. CSKA took the lead back with three minutes to play on a Sonny Weems lay-up, then added two Jeremy Pargo singles to get up three, 57:60. Johan Passave dropped a lay-up for Nanterre to pull back to within one. Victor Khryapa split a pair of singles for CSKA, then Will Daniels missed from short-range for Nanterre with 33 seconds left Pargo split a pair of free throws, Passave got the rebound of the second, but lost it out of bounds.CSKA couldn’t take advantage, giving Nanterre an opportunity for a last-second shot, which Jaiteh came up empty on, giving CSKA the win.

FC Barcelona – Partizan NIS Belgrade,67:60
Barcelona opened their 2013-14 Euroleague campaign by hosting Partizan NIS Belgrade and came out with a 67:60 victory. Barcelona was led by Ante Tomic and Kostas Papanikolaou, each scoring 13 points, while Marcelinho Huertas turned in a 10P/10A double-double. partizan got 15 from Dragan Milosavljevic, 10 from Leo Westermann, and 9 points and 13 rebounds from Jeffrey Lauvergne.

During the first quarter the lead changed eight times, with Partizan coming out with a 17:18 advantage after the first 10. Barcelona got the advantage in the second, outscoring their guests 11:8 to take a 28:26 lead into the break. The score remained tight in the third with Barcelona adding three to their lead, taking a 45:40 advantage into the final frame. The locals extended their lead to 12 during the fourth, but then let Partizan back in the contest, pulling to within five before Barcelona pulled away again, securing the win.

The contest was relatively close in the first half with Efes taking a 25:17 lead after one and Armani picking off one in the second, outscoring Efes 17:18, giving the hosts a 42:35 lead at the break. The second half was all Efes as they extended their margin in the third to 14 points, 66:52 at the end of the frame. In the fourth Milan worked to come back, but it wasn’t enough and the Turkish club put up their first win of the season.

Jamon Gordon and Kostas Vasileiadis each added 16 for Efes, while Keith Langford scored 20 and Alessandro Gentile added 19 for Milan.

Group D
Laboral Kutxa – Maccabi Electra, 84:80
Laboral Kutxa Vitioria earned their first win of the 2013-14 Euroleague season on Thursday with an 84:80 decision over Maccabi Electra Tel Aviv at home. Laboral built a 10-point margin at the half and had to fight off a comeback attempt by Electra, but was able to hold them off to secure the win.

The hosts pulled away late in the first frame to put together a 24:18 advantage, and extended the advantage to 10 at the half. The third quarter belonged to Electra as they were able to cut the gap to a single with a 4:13 run that ended the frame and send the clubs to the fourth quarter with the hosts up 62:61. Maccabi took the lead early in the fourth and extended it to three, 69:72. Shortly after Laboral regained the lead and was able to hold on for the rest of the contest. With just under a minute to play they held a four-point advantage that was cut to two. The hosts got a jumper as the shot clock was going off to extend to four, 84:80. Maccabi’s final attempts came up empty and Laboral nailed down their first win.

Crvena Zvenda Telekom – Lokomotiv Kuban, 84:87
Lokomotiv Kuban shocked the 19,000 in attendance at Kombank Arena on Thursday when they picked up their first ever Euroleague victory at the expense of Red Star Belgrade in their home arena. Kuban was led by Marcus Williams’ 23 points, including 5 of 6 from the line in the final 13 seconds.

The guests took the early lead during a high-scoring first frame that saw 50 points hit the board. By mid-way point Kuban had nine-points on Crvena 6:15 and they ended the frame at 20:30. Red Star came back in the second with the 14:2 run that gave them the lead, 34:32. They exchanged baskets through the rest of the half with Crvena holding a slight advantage, 42:38, as they headed to the dressing rooms for the mid-game intermission. The guests were able to get three back in the third to end the quarter with Red Star up 59:58. Lokomotiv went on a 0:9 run early in the fourth to get up 63:74 and then extending to a 13-point lead, 65:78. Red Star countered and went on a 15:4 run to cut the gap to four, 80:82, with just under a minute to play. In the final seconds of the game Williams was fouled three times and he connected on 5 of 6 of those free throws to seal the win for Kuban.

Lietuvos Rytas – Panathinaikos, 84:83
In what was no doubt the most exciting game of the day, Lietuvos Rytas outlasted Panathinaikos through 40 minutes in regulation and an extra 5 minute overtime period to pick up their first Euroleague win of the 2013-14 season. Renaldas Seibutis led Lietuvos with 19 points and the game winner in OT. Niether team put together a lead of more than six points during the contest.

The hosts got up 17:11 mid-way through the frame, but the Greens countered and pulled even at 25 at the end of the first. Panathinaikos got up by six in the second, but gave away the margin when Seibutis knocked down a pair of triples to end the half with the clubs tied at 42. Through the third they exchange baskets and the lead with the Greens heading into the final frame up by one, 59:60. The fourth quarter was the lowest scoring quarter of the contest, with the margin between the two staying tight. They battled through the final 10 until Dimitris Diamantidis sliced the cords with a three-ball with 18.8 seconds to play. Rytas had opportunities in the final seconds, but their shots came up empty, sending the contest into the extra frame. They exchanged baskets throughout the frame, setting up the final minute and a half where Mike Batiste connected on a pair of singles to tied the game at 80, then Seibutis dropped a jumper to regain the lead. Jame Gist hit one of a pair of free throws then grabbed the lead for Panathinaikos with a dunk inside a minute to play. The contest was decided by the Seibutis jumper with 5.5 seconds to play, giving the Lithuanians their opening win.

Seibutis was game-high for Lietuvos, with Darius Songaila scoring 13 points and grabbing 8 rebounds. Jonas Maciulis led the Greens with 13, followed by Batiste and Ramel Curry, each with 12.