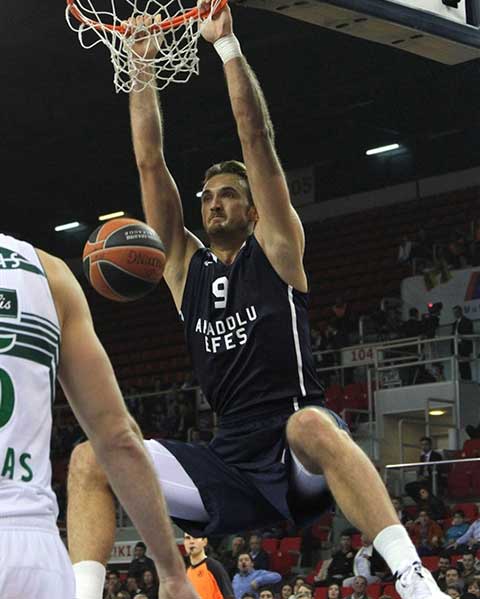 A win by a deuce counts the same as a win by a dozen… Maccabi Electra, seen to be struggling in the early part of the 2013-14 season, made it three straight in Euroleague competition with a 74:76 victory on the road against Lietuvos Rytas on Thursday.

It wasn’t a good day for the home clubs as 5 of 6 Thursday contests were won by the guests, with the sole home winner being Anadolu Efes.

In other Week 4 action Lokomotiv Kuban got a big road win over Panathinaikos, Red Star Telekom beat Laboral Kutxa Vitoria by 10 on the road, Real Madrid pounded Strasbourg by 19 in Strasbourg, EA7 Emporio Armani Milan traveled to Bamberg to take on Brose Baskets and came away with a 14-point win, and the only club to win one for the friendlies in the stands was Anadolu Efes with a solid 11-point win over Zalgiris Kaunas.

Group B
Brose Baskets – EA7 Emporio Armani Milan, 62:76
Milan pulled even in the Group B standings with Bamberg with a 14-point decision over the German club on their home court. A solid first half that ended with the Italians up 10 and then a nine-point spread in the fourth in Milans favor was too much for Brose to counter. Alessandro Gentile netted 18 and dished 6 for a 25 PIR for the winners.

Milan got up 0:6, but then saw Bamberg run off 12 unanswered, but that lead didn’t last long as the visitors knotted the contest at 14 shortly after. After the first 10 was in the books the guests held a slim 18-20 advantage. Milan took control with a 2:10 run and closed out the half with a Curtis Jerrells lay-up with three seconds on the clock and a David Moss jumper at the horn after he stole the inbounds pass to finish up 10, 33:43. Bamberg sliced five off the gap with an 18:13 third quarter. The hosts got to within a deuce but then couldn’t find the net for nearly six minutes in the fourth while Milan added seven in the same period to open the margin and cruise to a big road win, 62:76.

Gentile was game-high for Milan with 18, Samardo Samuels scored 13, Jerrells and Nicolo Melli (8 rebounds) added 11 each. Zach Wright was high-man for Bamberg with 13, Damir Markota tallied 10, and Sharrod Ford came one point away from a double-double, scoring 9 and hauling in 12 rebounds.

Anadolu Efes Istanbul – Zalgiris Kaunas, 72:61
Efes earned their third win of the season with an 11-point decision over Zalgiris in the only home win of the day. The win didn’t come easy for the hosts though, as they found themselves in a 54-all tie early in the final frame and needed a 12:2 scoring run to pull out the ‘W’.

Efes had a 10:2 run mid-way through the initial frame to get the first big lead of the contest. Zalgiris countered and the clubs finished the high-scoring first quarter knotted up at 27. The guests put a little distance between the teams, but it didn’t last long and the first half ended with the teams still tied now at 38-all. Efes got up by as much as seven in the third before Zalgiris countered again and set up the final frame with the hosts up 51:49. They drew even at 54 early in fourth, but a 12:2 run by Anadolu put them up 64:56 and a lead that the guests wouldn’t be able to cover before the final horn.

Scotty Hopson was game-high for Efes with 15, Dusko Savanovic and Kostas Vasileiadis scored 13 each, and Semih Erden (8 rebounds) and Tadija Dragicevic added 10 each. Justin Dentmon was high-man for Zalgiris with 14, Ksistof Lavrinovic scored 11, and Arturas Milaknis dropped in 10.

Strasbourg – Real Madrid, 66:85
Real Madrid cruised to their fourth win of the season with a solid 66:85 road win over Strasbourg. The loss drops the French club to 0-4 on the season.

Madrid won the first three quarters with big margins, getting up 17:25, then 31:46 at the half. They added another 11 in the third to take a 26-point lead into the final frame and gave up seven to finish with a 19-point advantage.

Rudy Fernandez had a big game for Madrid, netting 24 and earning a PIR of 28 on the night. Jaycee Carroll added 14. Alexis Ajinca scored 23 points and grabbed 8 rebounds for Strasbourg, and Kevin Murphy dropped in 17.

Group D
Lietuvos Rytas Vilnius – Maccabi Electra, 74:76
In a thriller in Lithuania, Maccabi Electra snatched up their third consecutive win in Group D with a last second floater by Deven Smith, beating his former club in the process. The win bumps Maccabi to 3-1 and keeps them at the top of the group, while Lietuvos falls to 1-3.

The guests got the early advantage, getting out front 18:26 after the first 10. At the start of the second Rytas was able to close the gap and pull to within three, but then Electra went on a 2:16 run to get up 25:40. As the clubs retired to the dressing rooms for the mid-game intermission, the scoreboard showed the guests leading 33:45. The third frame belonged to Lietuvos as they were able to claw their way back into the contest, running off nine unanswered late in the frame to pull to within four at the end of the quarter. In the fourth Maccabi got a bit of distance, but it didn’t last and Rytas took the lead with just under two minutes to play, 71:70. Inside 20 second to play saw the guests go out front with two pair of singles, then a triple on the hosts’ end of the court with 12.6 seconds knotted the score at 74. A miss with a follow-up offensive rebound kept the ball in Electra’s hands and a cutting Smith got a dish and closed the deal with a floater to put the guests up by a deuce with 3.5 to play. Renaldas Seibutis got the ball with time to fire up a triple to give the locals a win, but he came up empty giving Maccabi their third straight.

Smith was high-man for Electra with 18, Ricky Hickman scored 11, Shawn James and Sofoklis Schortsanitis added 10 each. Martynas Gecevicius was game-high for Rytas with 24, Seibutis added 15, and Omar Cook dropped in 10.

Kuban jumped out to a 5:12 advantage in the first on their way to a 12:17 final first 10 tally. The margin stayed the same in the second as the clubs tied 19-all in the second to send them to the intermission with Kuban up 31:36. The guests tacked on seven after the break with some power moves inside and hot shooting outside. As the final frame got underway the guests held a 41:53 advantage, but Panathinaikos had no plan to walk through the last 10 and made quick work of the 12-point deficit they had. A 12:1 run brought them within a basket, 55:57 with just over half the final quarter remaining. Kuban countered with a run of their own to get back up by seven, but that was also short-lived as the hosts ran off seven straight to tie things up at 65. Simas Jasaitis was sent to the line with 13 and connected on the pair to put the guests up three, 66:69. Dimitris Diamantidis knocked down a three-ball with seconds left on the clock to tie things up at 69. On the other end of the court Simon launched a potential game winner that sliced the cords with 0.3 seconds left on the clock.

The guests opened the contest by putting up 10-points in their hosts, finishing off the first 10 up 15:25. In the second the Laboral defense picked up their intensity and held Serbia club to just six points, while running off 13 unanswered to take the lead at the break, 32:31. The clubs stayed tight for the better part of the third frame , battling to a 46-all tie with just over three minutes to play in the frame. Red Star took the lead in the final minute to head into the fourth up 51:54. A 2:8 scoring run through the middle part of the fourth put the game firmly in the guests hands, who finished out with a 10-point margin for their first Euroleague win.