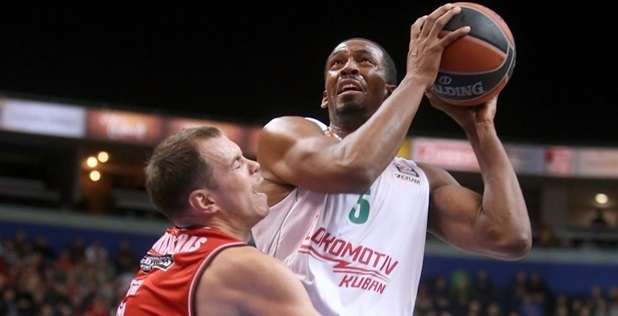 Euroleague Round 7 kicked off on Thursday with six games around Europe and now that we are deep into the Regular Season the clubs to take part in the Last 16 are booking their places. Last week Real Madrid, Fenerbahce, and reigning champs Olympiacos secured their places in the next round and this week Russian club Lokomotiv Kuban joined those giants in the Last 16.

Kuban defeated Lietuvos Rytas on the road to progress from Group D, while Tel Aviv also recorded an away win in the group on the night by overcoming Crvena Zvezda. Runaway Group B leaders Real Madrid were also in action and Los Blancos cruised to a comfortable away win over Bamberg. In Group A Nanterre took a narrow home win against Partizan.

The most mouth watering clash of the night happened in Group C where defending champions Olympiacos downed Turkish giants Galatasaray at home. Rounding out the action was a game between Stelmet and Malaga in which the Spanish team picked up a win away from home.

Real Madrid continued to impress in the Euroleague this season and the Spanish club remains unbeaten in the competition this campaign. It was another dominant performance as Madrid put twenty points on Brose Baskets Bamberg in front of the German crowd. The win puts Real number one in Group B with 7-0, while Bonn stays in fifth, but now with a 2-5 record.

Despite the crushing score the game was actually close in the early stages with both teams trading baskets in the first quarter, leaving the score at 20-20 after ten. In the second period the hosts continued to stay in touch but Madrid´s quality started to come to the fore and by halftime Los Blancos lead 38-43. After the intermission the visitors continued to be in control of the game and by the end of the third had carved an 11 point lead with the board reading 49-60. At that point the game looked secure but for perhaps the first time this season Madrid became complacent and allowed the gap to be cut to 3 points. Luckily the Spanish team found yet another gear and surged through the second half of the fourth to go from a three point lead to a twenty point lead in 4 minutes.

Nikola Mirotic nailed 4 from 5 three-pointers to lead the way for Madrid with 20 points. Sergio Rodriguez took 19 for the winners, but Rudy Fernandez was the star of the show with 13 points, 8 assists, and 4 steals.

Sharrod Ford and Maik Zirbes both hit 12 for Bamberg.

While Real Madrid and Fenerbahce have grabbed all the Euroleague headlines, current champions Olympiacos have been going along nicely and like those two in form teams are also unbeaten in the competition. The Greek team extended that run on Thursday with a home victory over Galatasaray, in the tastiest game of the night. The champs now have a 7-0 record in Group C, but Galatasary stays in the hunt for a Last 16 berth in second place with 4-3.

The home team got off to the perfect start in the first quarter and dominated the early proceedings until they led 18-10 at the close of the period. During the second quarter Galatasaray woke up and started putting pressure on Olympiacos, but The Reds responded to carry a 35-24 margin into the changing rooms. During minutes 20-30 the Greek champions continued to keep a safe distance from the visitors and by time the third ended the score read 59-35 and the game was over. Q4 saw much of the same, despite Galatasaray narrowly outscoring the hosts, and Olympiacos took the win.

Bryant Dunston was in good form for the winners and collected 18 points, 5 rebounds and 3 blocks. Vassilis Spanoulis was yet again a big contributor for the home team with a 12 point haul.

Furkan Aldemir recorded 10 points plus 7 rebounds in the losing effort.

Kuban went to the Siemens Arena in Lithuania and defeated home team Lietuvos Rytas and get the win needed to progress to the Last 16 of the Euroleague. The win puts the Russian club 6-1 in Group D, a fantastic achievement in a Group that also includes giants Panathinaikos and Maccabi Tel-Aviv. Rytas continues to sit at the foot of the table with a dismal 1-6 record, which currently ties with Partizan as the worst in the competition.

Despite the comfortable margin of victory at the final buzzer, the early clashes did not look good for Lokomotiv as Lietuvos set about the visitors in the first quarter. By the end of the first 10 minutes the hosts led 24-16 and the visitors had a mountain to climb. In the second quarter the Russian club started climbing that mountain and basket by basket finally reached the summit, making a turnaround in the game to lead 31-39 at halftime. That second quarter collapse proved to be the end of Rytas as a force in the game and during the third quarter Lokomotiv continued to press and led 40-61 after 30 minutes. The fourth quarter proved to be easy for the visitors as all the fight had left the home team, and with the win Lokomotiv progressed to the Last 16, a stunning achievement in the club´s debut Euroleague season.

Derrick Brown paced Lokomotiv with 20 points and 8 rebounds in a fine display, while Richard Hendrix was also immense and had 14 points, 6 rebounds, 5 assists and 4 blocks.

Renaldas Seibutis was the pick of the bunch for Rytas with 15 points and was backed up by Juan Palacios with 13.

***
Other games on the night