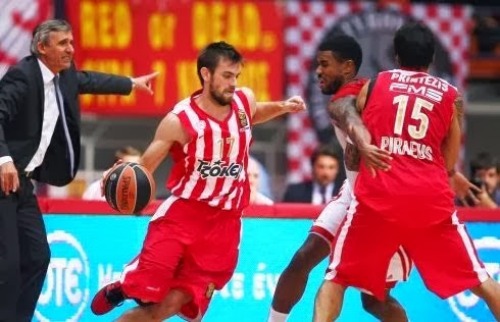 Four games took place on Wednesday as the second round of the Euroleague Last 16 got underway. The pick of the action was in Group E where FC Barcelona picked up an important road win over Fenerbahce and Olympiacos fell to defeat away to Milan. There were also two games in Group F as Tel-Aviv downed Lokomotiv Kuban at home and Bayern Munich continued to impress with a home win over Partizan NIS.

There will be a further four games on Friday night as Round 2 is concluded with Efes welcoming Malaga, and Laboral Kutxa hosting Panathinaikos in Group E. In Group F Zalgiris Kaunas will visit CSKA Moscow, while Real Madrid is at home to Galatasaray.

Reigning champs Olympiacos lost for this first time in this season´s Euroleague competition after an uncharacteristically poor performance away to Milan. The two time defending champions lost by thirty points as the Italian hosts played a wonderful game and sounded their own Last Four aspirations (the Last Four will be held in Milan´s Mediolanum Forum). Milan now goes 1-1 in Group E in 4th place while Olympiacos sits 5th with the same record.

A slow opening to the match saw neither team register a basket in the first three minutes of the game, but that was ended as Milan scored. The first 10 minutes saw a lot of back and forth action, but it was the visiting Olympiacos that headed the scoreboard 16-21 at the end of the period. The Greeks were looking good and could not have predicted the thrashing that was to come, but during the second quarter Milan started working the basket more often and reaped the reward of a 39-32 halftime lead. Milan came out in the third an inspired team and set about halting any thoughts of an Olympiacos comeback, so much so that the Italians held a 63-40 cushion after 30 minutes. The game had been over for some time, but Milan continued to press and recorded a thrashing over the double Euroleague champions.

Keith Langford pounced with 17 first half points to pace Milan, while along the way he hit 5 from 6 at the three point arc. Daniel Hackett also chipped in with 17 points and the winning effort was helped immensely by Gani Lawal, who had 10 points, 9 rebounds and 5 blocks.

Olympiacos had just one double digit scorer in the form of Georgios Printezis with 12 points.

When Barcelona visited the Fenerbahce Sport Arena during the Regular Season the Spanish club was sent packing with a defeat from a flying Fener team. However, the tables have turned in recent weeks and Barcelona exacted revenge for that earlier loss with this hard fought but important road win. Barcelona´s victory puts the Catalan giants at the summit of Group E with a 2-2 record, while alarm bells may be ringing in the Fenerbahce locker room as the team sits last in the standings with a 0-2 record.

Barcelona was never trailing at the end of a quarter and during the first period the Spanish visitors took an early 0-5 lead, an advantage that was maintained after 10 minutes (18-23). Barcelona enjoyed the early stages of the second quarter by opening an 8 point gap, but eventually Fenerbahce started to click and the Turkish team made the game even by the halftime buzzer at 39 apiece. It was shaping up to be a close match, and so it proved as the teams emerged for the second half with minutes 20 to 30 remaining close fought. However, despite the home team´s best efforts they could not secure a 30 minute lead, with Barca leading 56-58 heading into the last stanza. In the 4th period the game remained in the balance and with 11 seconds left Fenerbahce still had a chance of victory. That chance was wasted when the away team struck two free throws to secure a difficult road win.

Barcelona´s victory was secured without the experience and guile of Juan Carlos Navarro, but the team had no shortage of quality on display. Marcelinho Huertas secured a game high 23 points (along with 7 assists and 4 steals) for the Spanish team, while Brad Oleson added 14 points.

Melih Mahmutoglu and Nemanja Bjelica offered up 15 points each in the losing effort and fellow Fener stars Emir Preldzic and Bo McCalebb each got 13.