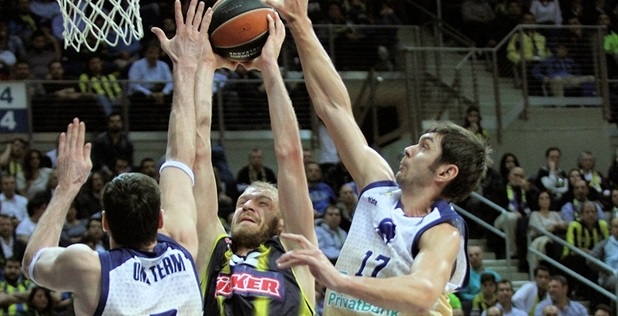 Six games held around the continent brought Round 6 of the Euroleague to a close on Friday night in what proved to be another night of exciting action. It was a night of home comforts as five of the games went in favour of host teams, with only one road victory on the night. The league´s giants continued to flex their figurative muscles as the same clubs emerge as contenders in the second half of the Regular Season.

Fenerbahche continued to march confidently in Group A with a cruising home win over Kiev to stay unbeaten at the top of the group. Real Madrid continued to impress in Group B with a comfortable victory over Zalgiris in the Spanish capital to also stay undefeated in the Euroleague this season. Elsewhere in the group, Milan continued to be the best of the rest with a home win against Efes, while Strasbourg welcomed and beat Bamberg in France.

Olympiacos remained on course for a third consecutive Euroleague title with an easy win over Malaga in Group C to sit pretty at the top of the group. In Group D Lokomotiv shot down Crvena Zvezda in Russia to top the table.

Fenerbahce Ulker vs. Budivelnik Kiev, 84-68
Fenerbahce´s win tonight means the Turkish giants became the first team to qualify for the Last 16, a fitting reward for a fine campaign so far. The Istanbul club now holds a commanding 6-0 record at the top of Group A, while Kiev slips to 1-5.

Fener were in control for much of the first quarter and at one point held a seven point cushion. The visitors did well to cut the lead but at the end of the period the Turkish hosts were winning 27-23. The second quarter proved to be the one that ultimately decided the game as Fenerbahce reeled off 14 unanswered points before Kiev responded to go in at halftime with the board reading 52-35. That 17 point difference would prove vital heading into the second half and during minutes 20 to 30 both teams traded blows to draw the period 16-16 with the score at 68-51. In the fourth quarter the hosts closed down space and comfortably saw out the game to claim a sixth straight win.

Bojan Bogdanovic was impressive once again for the winners and bagged 20 points. Luka Zoric aided with 15 points, while Gasper Vidmar was in good touch with 12 points and 8 rebounds.

Dainius Salenga was strong from beyond the arc for Kiev and hit 4 from 5 threes on his way to a 16 point total. Also looking good for the visitors were Ricky Minard with 14, Janis Strelnieks 11, and Dajuan Summers with 10.

Real Madrid vs. Zalgiris Kaunas, 95-67
Los Blancos dealt another crushing Euroleague defeat on the day head coach Pablo Laso extended his contract for another two years. With the victory Madrid moves to 6-0 at the top of Group C and qualifies for the Last 16. Kaunas will be disappointed with the manner of the defeat in Spain and the Lithuanian team now slips to 2-4 and 4th place in the group.

Real Madrid was once again on fire in what proved to be another one-sided affair. The Spanish giants set about Zalgiris from the first tip off and by the end of the initial 10 minutes had carved out a substantial lead with the scores at 28-14. The home team was in no mood to ease off in the second period and continued to dominate proceedings as the halftime buzzer sounded with the score at 56-32. Any hopes of the visitors coming back into the game were dashed in Q3 when Madrid again won the period to put the scoreboard at 79-53 after half hour. With the game all but over, the hosts cruised through the final 10 minutes as Zalgiris also eased off.

In defeat Justin Dentmon collected 16 points and Arturas Milaknis 14 points for the away team.

Unicaja Malaga vs. Olympiacos Piraeus, 74-82
Champions Olympiacos picked up the only road win of the night by seeing off a resilient Malaga and joined fellow Euroleague contenders Madrid and Fenerbahce in the Last 16. The win puts the Greek giants 6-0 at the top of Group C, while Malaga´s hopes were dented with the team slipping to 4th position with a 2-4 record.

Olympiacos were made to work for victory as Malaga emerged at the start of the game as the most likely to win. The Spanish club kept solid in defense and picked up points in the first quarter to lead 23-20 at the end of the 10. The second quarter proved to be a repeat of the first as Malaga continued to frustrate their Greek opponents. By the time the teams went into the changing rooms for halftime the scores stood at 46-41 in favour of the hosts. Leading by five points going into the third period, Malaga maintained a solid foundation throughout the 10 minutes and although Olympiacos showed signs of revival the Spanish hosts led 65-62 heading into the final period. A cagey opening to the fourth quarter worked in favour of the home team, but Malaga were then stunned by three 3-pointers from reigning Euroleague MVP Vassilis Spanoulis. The tide had turned and the Greek visitors closed out a game they had never looked like winning until there was just seven minutes left.

Vassilis Spanoulis ran the show for Olympiacos and collected 21 points and backed the scoring up with 4 assists. The shooting guard moves to fifth in the all-time Euroleague assists chart. Matt Lojeski was also in good scoring form for the visitors and tabbed 15 points.

Despite a fourth quarter collapse, Malaga were good in the game, with Nik Caner-Medley and Rafa Hettsheimeir each taking 11 points and Carlos Suarez and Earl Calloway netting 10 apiece.