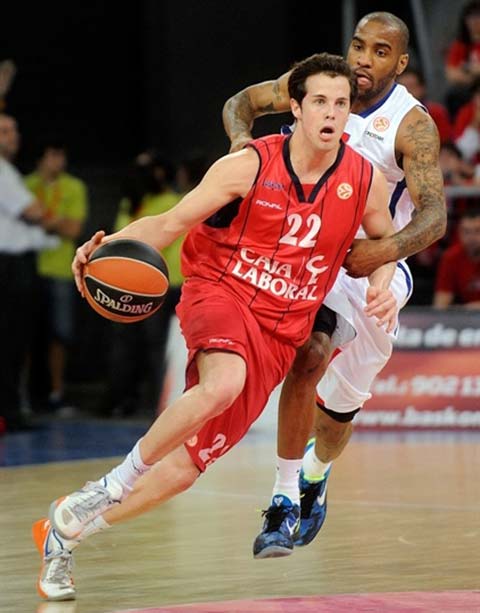 Just when it looked like the Euroleague quarterfinals were going to be simple, three series of three and done and the one oddball matchup between Panathinaikos and Barcelona going four or even five games; Anadolu Efes and Caja Laboral decide that they want to keep playing too… As all four best-of-five series shifted to new locations for Game 3, host clubs Efes and Caja smacked around their welcomed guests to the tune of 11 points in Istanbul and 21 points in Vitoria. Don’t let the 21-point difference between Caja Laboral and CSKA Moscow fool you though, the difference at the peak was 33 points and the way each team was playing, it could have been 50 if Caja wanted to really run up the score. Efes got new life against the defending champions Olympiacos with an 83:72 win in a game that they led by 19 at one point.

Thursday sees Game 4 of the thriller between Panathinaikos and Barcelona in Athens, with the series leaning in the Greens favor, 2-1. The series has been so emotionally charged from the fans perspective that the Panathinaikos officials have had to put up protective netting in front of the stands for added security for the players. On Friday Efes and Olympiacos will take the hardwood for their fourth contest with Olympiacos up 2-1 and Efes with hopes of a return trip to Greece. In Vitoria, Caja Laboral is down 2-1 to CSKA Moscow and will be looking to make travel plans back to Moscow for a game five.

Anadolu Efes – Olympiacos, 83:72
Facing elimination and a series sweep by the 2011-12 Euroleague champion Olympiacos, the hands down surprise of the 2012-13 Euroleague season, Anadolu Efes, pulled off another big win to force a Game 4 in their best-of-five series. Efes got 17 points from Jordan Farmar and 13 points, 9 rebounds, 7 assists, 3 steals and a Game 3 MVP worthy PIR of 24. Acie Law led the Reds with 19.

The two clubs exchanged baskets through the first seven minutes of the first frame until Farmar dropped in a triple and followed up with a jumper to get Efes up 17:11. Law sliced through the host’s defense on two consecutive trips down the floor to connect with two lay-ups and Giorgi Shermadini followed up with driving lay-up of his own to knot the score at 17. Efes took a two point lead into the second frame after a Kerem Gonlum dunk at the end of a Jamon Lucas assist.

In the second the hosts got up five early, but Olympiacos took the lead mid-way through, 27:28. From there on it was all Efes as they outscored the Reds 10:1 to close out the first half of play, 37:29.

The momentum stayed with the home club as the second half opened, with five more unanswered pushing the advantage to 13, 42:29. They traded buckets for two minutes bringing the score to 49:39, then Efes ran off seven straight to get up 17, 56:39. After a pair of charity tosses from Olympiacos’ Kyle Hines cut the gap to 14, Stanko Barac connected on a jumper and Sasha Vujacic dropped in a triple to extend the Efes margin to 19. The Red sent three different players to the line in the final minute of the third and sank four of six singles to reduce their deficit to 15, 65:50, as the third 10 wrapped up.

The defending champs were able to chip away at the lead early in the fourth, but even though they held Efes scoreless for nearly three minutes, they found it tough to find the cords themselves. Six unanswered points brought the Reds to within nine, 67:58, and after Lucas dropped in two deuces to counter Kyle Hines jumper and a free throw, Law knocked down three-pointer and a jumper to pull the guests to within seven, 71:64. Farmar countered with a jumper of his own, then Gonlum sank a pair of singles, as did Sehim Erden, to all but seal the deal for Efes with a 13-point lead, 77:64. Law did his best to get Olympiacos back in the game with five points in the final minute, but Farmar and Lucas fought off the comeback to set up Game 4 on Friday.

Farmar added 3 rebounds and 5 assists to his 17 points to lead Efes. Erden and Dusko Savanovic each added 15 points, while Erden also hauled in 9 rebounds. Lucas earned Game 3 MVP honors with a PIR of 24, one better than the runner-up in the tally, Barcelona’s Ante Tomic, who finished the week with a PIR of 23.

“It’s a very crucial win for us. Tonight we shared the ball very well in order to become much more affective compared to the first two games in Athens. We used both inside and outside much better in offence. When we did the things well in defense, we had nearly a 20-point lead in the game. But after that, we lost the rhythm and the foul trouble was the main reason for that. But we performed the details better tonight and deserved to win. We have to do the same on Friday.”

Caja Laboral – CSKA Moscow, 93:72
Caja Laboral gave the just over 12,000 friendlies packed into the Fernando Buesa Arena in Vitoria, Spain, an evening worth of excitement as they pounded CSKA Moscow in Game 3 of their best-of-five Euroleague quarterfinal series. The win brings the series to 2-1 in favor of the Russian club, but gives new life to Caja and another game for their fans. This contest was only close in the first frame, but after that the locals dominated the game in a big way. The most remarkable stat was percentage made behind the arc, where Caja connected on 15 of 26 shots (57.7%), while CSKA could only manage to hit 7 of 25 (28%). At halftime CSKA was just 1 of 18 from behind the arc.

CSKA scored the first points of the contest and kept game close, but by the end of the first quarter, Caja was up 15:14. The second frame is where the hosts took complete control, outscoring their visitors 28:10 to head into the locker room at the intermission up 43:24.

In the third quarter, the advantage continued to grow, until it peaked at 33 points right before the end of the 30th minute. CSKA’s Aaron Jackson dropped in a lay-up to cut the lead to 31, which is where the score remained at the end of the third, 70:39.

With both teams resigned to the fact that Game 3 was basically in the books, the benches cleared to give substitutes playing time. They put on a shooting exhibition for the crowd, tallying an amazing 56 total points (23:33) in the final 10, including three triples by Caja’s Thomas Heurtel in the final minute plus of the contest.

CSKA was led by Nenad Krstic’s 12 points and 5 rebounds. Jackson and Vladimir Micov scored 11 each, and Sonny Weems and Zorn Erceg contributed 10 each.

“First thing I must do is to sincerely congratulate Caja Labora for their great game tonight. I can’t find another expression to define what happened; they kicked our asses. You cannot come to Vitoria thinking that it’s going to be easy, even with a 2-0 advantage. You can imagine that the opponent will take a step ahead in terms of aggressiveness, pride, intensity, but today it was not only that. They just played better basketball than we did. It wasn’t a surprise for me. I’m older than my players, and I remember when I came here in 2001, with a team that counted on players like Ginobili, Jaric, Andersen, etc. We won the first game by 20. The next one we were destroyed. The only thing that prevents me from trying to jump from the window of the upper floor of the hotel is to think that with that team we committed the same mistake this team committed today. I don’t want to think too much about it right now. It’s obvious I’m not happy at all, and that I would set a practice right now if I could, but we must keep calm. There is a fourth game ahead of us.”