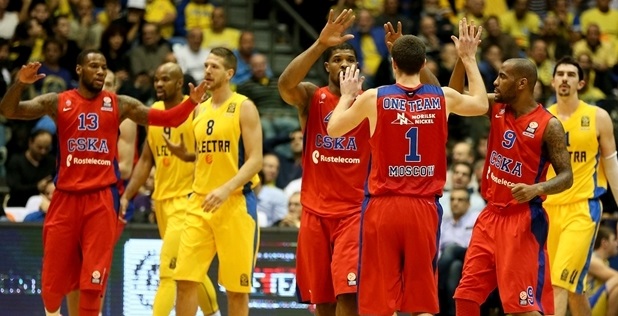 With news that Euroleague Final Four tickets have all been sold, it seems the only thing we’re waiting on for the Madrid showpiece are the teams. Round 7 of the competition can make things just a little clearer as more teams can find their way to the Top 16, but with another day of action and eight more games to come tomorrow, the week is only getting warmed up.

On Thursday Unics Kazan stunned Real Madrid, while CSKA dominated the champions on the road. Elsewhere there were victories for ALBA Berlin, Fenerbahce, Crvena Zvezda, and Laboral Kutxa.

Real Madrid vs. Unics Kazan, 75-85
Unics Kazan made the long journey from Russia to Spain and stunned Euroleague powerhouse Real Madrid in their own backyard. At the moment Los Blancos still holds first place in the group with a 5-2 record, while Kazan improved its fortunes to 3-4 and remains in the chasing pack.

A high octane first quarter saw both teams pepper the basket, but Unics managed to snatch the frame late on to lead 22-23 after ten minutes. Madrid kept consistent at the bucket in the second stanza to send home 24 points, while keeping Kazan at 19 points, enough for a 46-42 halftime lead. The hosts were on top heading into the third act, but the Russian club exploded in the period to win it comfortably at 15-25, making it 61-68 through three minutes. Los Blancos had no answers for the visitors as Unics wrapped up the game with a 14-17 streak in the fourth.

D’or Fischer was key for Unics as he put in 25 points and took 8 off the glass, while Curtis Jerrells secured 23 points and 8 rebounds. Keith Langford secured 14 points and James White managed 11 in the win.

A struggling Madrid team had Sergio Rodriguez on 12 points, Andres Nocioni on 11 points, and Gustavo Ayon on 10 points.

The Spanish visitors managed to carve out a slender lead in the opening frame to lead 20-21 lead at the first break. In the second quarter Malaga extended with a 17-24 run that made it comfortable for the Spaniards through halftime, 37-45. The teams traded scores through the third stint to lock at 16 apiece and give Unicaja one quarter to defend an eight point lead (53-61). ALBA managed to hit a scoring vein and released 26 points through the nets in Q4 to steal the game at the death.

Maccabi Tel Aviv vs. CSKA Moscow, 61-84
CSKA Moscow sent a message through the Euroleague by dismantling reigning champions Maccabi Tel Aviv in Israel. The Russian powerhouse continued its blazing streak to move 7-0 at the top of Group B, while Maccabi is left trailing in second with a 4-3 record.

CSKA has been in formidable form this season and the Russians showed that by laying down a marker in the first quarter, stunning Maccabi Tel Aviv with a 12-25 opening gambit. The hosts recovered from the blitz and improved in the second quarter to outpace Moscow 18-15, making it 30-40 through the long break. The visitors had control with a double digit lead and they extended through a 16-19 third stanza to look comfortable at the final split, the scoreboard reading 46-59. CSKA Moscow didn’t ease off the gas down the straight as they netted 25 points in the final stint on the way to a huge road win.

Sonny Weems bagged 19 points for the winners, while Sasha Kaun doubled up with 15 points and 10 rebounds.

Devin Smith led the way in the losing effort with 14 points, backed by Sylven Landesberg with 12.

Fenerbahce Ulker Istanbul vs. PGE Turow Zgorzelec, 89-74
Fenerbahce cruised by PGR Turow to hand the Polish champs their sixth defeat of the 2014/2015 Euroleague. The Turkish club improves to 5-2 in second place while Zgorzelec props up Group C from 1-6.

Fener opened hot and delivered a big first quarter to carve out a 26-12 lead through the first quarter, a significant double digit lead. In the second PGE Turow improved at the bucket and opened a 22-24 run to win the frame, but Fenerbahce held the scoreboard 48-36 at the midway buzzer. The teams could not be separated through the third quarter as they both scored 17 points through the stanza (65-53). In the final act the hosts ensured victory with a 24-22 streak.

Crvena Zvezda Belgrade vs. Neptunas Klaipeda, 79-62
Crvena Zvezda is having a fantastic season, topping the Adriatic League undefeated and a Top 16 place looming in the Euroleague. The Serbian powerhouse gunned down Neptunas to move into second place in Group D with a 4-3 record, while the Klaipeda contingent drops out of the qualification places with a 3-4 record.

Neptunas could not live with the Red Star attack in the first quarter as the home team romped to a 22-14 lead after 10 minutes. The visitors soon found a rhythm though and in the second stint put together a 13-23 run to lead proceedings 35-37 at halftime. The locker room chat obviously helped the hosts as they exploded in the third period to win it 27-10, before sealing an easy home win with a 17-15 winning fourth quarter.

Laboral Kutxa Vitoria vs. Olympiacos, 89-70
Greek giant Olympiacos slipped to its first defeat of this Euroleague season by being soundly beaten by Laboral Kutxa in Spain. The win put the Vitoria club back in the mix with a 3-4 record, while Olympiacos held on to top spot in Group D with a 6-1 record.