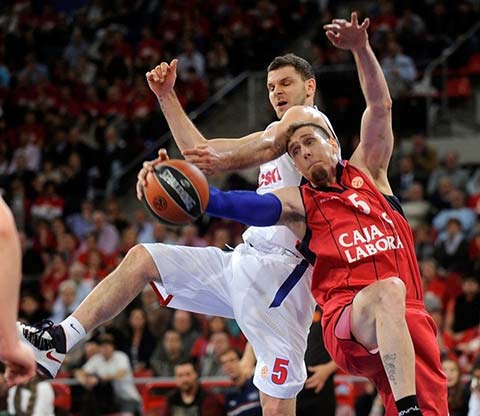 The field for the Euroleague Final Four is now half complete as CSKA Moscow held off Caja Laboral in Vitoria, Spain, on Friday to pick up their third game in the best-of-five series, 85:94. Over in Istanbul, Turkey, Anadolu Efes kept their remarkable season alive with a huge fourth quarter comeback that was capped off with an ugly tip-in by Jamon Lucas with 1.5 seconds left on the clock to give the hosts a 74:73 win and tie the series up at two games each. They will play the fifth and decisive game on April 26th in Piraeus.

Caja Laboral Vitoria – CSKA Moscow, 85:94
CSKA Moscow became the second club to qualify for the Euroleague Final Four with a big 85:94 win over Caja Laboral. Caja certainly didn’t make it easy for the Russian club as in the first half neither team held more than a four-point advantage and even after CSKA got up by 15 mid-way through Q4, Caja clawed back to within three. In the end CSKA kept their calm, despite an ever-growing hostile crowd and a motivated Caja Laboral squad.

The first half was a battle of who would make the first misstep and it never happened. The clubs exchanged the lead numerous times in both the first and second quarters and neither could build more than a four-point lead before the other came back. At the end of the first frame CSKA held a slim 20:22 lead.

Caja opened the second quarter with the biggest scoring run of the game at six points. CSKA couldn’t find the bottom of the net for a full four minutes, but after Caja’s initial six, they cooled off as well. After pulling even at 28, the clubs went back to exchanging baskets and the lead until the end of the frame when Theo Papaloukas dropped in a pair of singles to give CSKA their two-point lead back that they started the second 10 with. As they walked into the dressing rooms at the intermission the scoreboard showed the guests up 34:36.

The entire contest came down to the third quarter, where CSKA dominated and put up a 4:16 run to get up by 14, 38:52. Caja was able to cut the margin to seven shortly after, but then CSKA extended back to 12. Nenad Krstic dropped in a catch-and-shoot baseline jumper just before the horn to give the guests a 54:67 advantage as they prepared for the fourth 10.

The clubs exchanged basket for a few minutes and then Nocioni was whistled for an unsportsmanlike foul after he accidentally hit Milos Teodosic in the nose while playing defense. The crowd didn’t care for the call and grew increasingly verbal along with sporadically tossing items on the court, keeping the floor crew busy for the rest of the contest. Teodosic dropped in his free throws, then Krstic hit a pair of singles and a jumper while Caja came up empty on consecutive trips down the court to give the guest a 68:83 advantage. The hosts weren’t done though as they found their range from behind the arc and knocked down four triples on consecutive possessions and held CSKA scoreless at the same time. During the run Thomas Heurtel hit three of the four three-pointers and a fast-break dunk to bring Caja to within three, 82:85, with under two minutes to play. CSKA got a key three-ball from Teodosic to open the lead back to six with just over a minute to play. Fernando San Emeterio was called for a technical foul sending Sonny Weems to the line and giving the ball back to CSKA, which killed any rally Caja had left in them. In the end, the guests came out on top 85:94, earning a spot in the Final Four.

The trio of Krstic, Weems, and Victor Khryapa all led CSKA with 19 points. Khryapa also added 12 rebounds, 4 assists, 3 steals, and a Game 4 MVP worthy performance with a PIR of 29. Krstic ended the contest with the second highest PIR of all Game 4 performances at 27. Teodosic added 13 points and 4 assists, and Vladimir Micov dropped in 12 points while grabbing 5 rebounds.

Fabien Causer was team-high with 19, Heurtel contributed 17 points and 3 assists, and San Emeterio dropped in 15 points while hauling in 5 rebounds.

“We wanted to have played like this in the previous game, but it did not happen. It was very disappointing, talking about our offense, and also our defense was under our level. It wasn’t like it was in the first two games we played in Moscow. Tonight it was different, we were able to raise our level. You know when you play in Vitoria that you must expect a hard game, with lots of support from their fans, as they wanted to bring the series to game 5 back to Moscow, but we played solid defense, and even though we struggled in offense in the first half, our defense made the difference and allowed us to build a good lead in the third quarter, when we started getting the shots. We needed to play with patience the full game and not to get disappointed with mistakes in offense. It’s always a great experience to play in a court like this. There aren’t many arenas with such great support from the fans like this, maybe a couple in Greece, Turkey and also Spain, of course. They support really hard and very aggressive. We understand them and it’s a very good thing for Caja Laboral to be able to count on fans like this.” –Victor Khryapa

Anadolu Efes – Olympiacos Piraeus, 74:73
In a thriller in Istanbul, Anadolu Efes forced a Game 5 back in Greece with a last second tip-in by Lucas that tied the best-of-five series at two games each. After a big first quarter by the Reds, the contest was tight the rest of way through. A 10-point run early in the fourth by Olympiacos gave the guests the upper hand, but the hosts finished the game with the last eight points to keep their season alive and hopes for a Final Four appearance only 40 minutes of basketball away. Jordan Farmar led Efes with 15 points, while Olympiacos’ Acie Law also knocked down 15.

The Reds took the early lead in the contest, getting up 12:20 after the first 10 helped in part by long-balls from Law and Kostas Papanikolaou.

Just over 11,000 Efes friendlies had come to the Abdi Ipekçi Sports Hall in Istanbul Friday to give their club extra motivation and an early three-point play by Stanko Barac from a nifty assist by Kerem Gonlum got them back on their feet en mass. Shortly after, the locals had completed an 8:2 scoring run to pull back to within two, 20:22, giving the crowd further hope after the rough first 10 minutes. The Reds quieted them down a bit by pushing the lead back to nine, but a Farmar triple, four free throws and an assist to a back-door cut by Kerem Tunceri late in the quarter got Efes to a point down, 33:34. The clubs exchanged baskets for the last two minutes of the half, but it was the guests that took a six-point advantage into the break after a Papanikolaou triple brought the score to 38:44.

Efes cut the gap early on in the third, only to have Olympiacos extend back to six. Mid-way through the frame the hosts pulled to within two, which is were the scoring was a the end of the third, 56:58, heading into the final quarter.

Seconds into the last frame he hosts knotted the score at 58 and then connected on another two baskets to get up four, 62:58. From there, the Reds ran off 10 straight, to get up 62:68. Just as the situation looked out of hand, Efes started dropping in shots and CSKA went stone cold. Semih Erden connected on a pair of singles for Efes’ first points in nearly five minutes, only to be countered by a pair of Law free throws to bring the score to 66:73. Efes shut the Reds’ offense down, while chipping away at the lead to draw within two. Farmar was fouled with 19 seconds left, but could only connect on the first free throw, missing the second and leaving them down one, 72:73. As the second free throw came off the rim, Olympiacos’ Georgios Printezis knocked the ball out giving it back to the hosts under their basket. After some stalling to run the clock down, Farmar set up the defense and drove the lane, drawing in half the defenders. As he got close to the basket, he kicked the ball to Josh Shipp on the left side behind the arc, Shipp’s three-ball went long, but Lucas was waiting and tipped up a desperation shot that found the bottom of the net with just over a second to play. The Reds called a timeout to put a play in motion, but Kostas Sloukas’ last second shot came up empty giving Efes another day to prepare for.

Farmar’s 15 points led the Efes effort, while Erden and Dusko Savanovic added 12 points each. Erden added 12 rebounds to pick up a double/double with 12/12. Lucas scored 10 and added 4 rebounds, 3 assists, and a steal.

Olympiacos got 15 from Law, 14 points and 7 rebounds from Papanikolaou, 11 from Kyle Hines, and 10 from Sloukas.

“There are moments in life when you need luck on your side. In our last possession, Josh (Shipp) had the ball at the corner. I thought he could score but the ball hit the rim. Luckily, it came toward my hand and I did the tip-in. The luck was on my side. Anyway, we are alive in the series and will keep on fighting until the end.” — Jamon-Alfred Lucas